A walrus-post, filled with random bits.

Um.  Things that have happened. right then.

The car window that was fixed has broken again due to internal conflicts with the door opening mechanism whatsit.  I did ask when I picked up the car from the garage and they told me the door and window had quarrelled, whether they were likely to do so again? They promised not.  They were wrong.

Hmph.  I now have a solid wooden wedge keeping the window up again while the garage scours ebay for a second set of window parts, and a new door-thingummy.  I hope they can replace both together this time, and restore harmony to the Door.

I finally got around to assembling the Fidget Board I have been making.  This was solicited by a local nursing home which cares for dementia patients: apparently a Thing now is to fix a bunch of knobs, switches, clips, hinges etc to a board, which is then left around in the lounges etc, and gives the residents something untaxing but occupying to do with their hands.  I thought this seemed like a great use for some of the many 'That Will Come In Handy Some Day!' items I have piled in the utility room.

It was harder work than I had expected putting it all together though, because it seemed like I had 999 partial... things. Objects. Artifacts. Gadgets. Hardware. Wood... bits. Very few of which fitted neatly together.  I ended up having to carve a plug-hole for my nice shiny metal plug on a chain, for example, because I assume that we either used the hole that the plug came with, or maybe there wasn't a hole?  Who knows, that would have been years ago.  YEARS I have been hoarding that plug on its shiny chain, and probably a year I have been hoarding the spare shelf that came with my Art Stuff shelves, that I used for the board bit. But now I have Done Something With It, and shortly I shall say farewell to it forever, which cannot be a bad thing.

I have photographed a lot of roleplaying games recently, which I rather enjoy. We seem to have moved now to a status where I am doing most of the shop photography and Pp is doing the data entry and stuff that requires Deep Lore about Roleplaying History. New (to us) roleplaying games are being added at a rate of knots and a goodly number of people are buying them.  This is good.

The cats are very happy at the moment, and Gothmog and Fankil spend a lot of time wrestling and boxing and doing other cute things.  Sometimes Theo joins in (Fankil really likes Theo, though I think he's wisely wary of Theo getting overexcited and hence too rough).  I would take pictures of this, only the automatic lens on my camera has failed and taking photos of wrestling cats in poor light using a manual lens seems a bit fiddly.  Maybe later in the year,

Although Theo failed his final exam at Dog School, because he absolutely would not lie down on command (he knows the command.  He just didn't feel like doing it when there were puppies around to look at), I have none the less declared him done for now on the dog training front.  We may start lessons again in September.  But he does know all the basics, and I just need to practice practice practice on defeating distractions, and that will be easier if I just take him places to practice rather than to classes, I think.  He is currently 8-9ish months, so he's really at maximum distractability at the moment.  He is getting better at bringing me his squeaky walrus to throw instead of humping my leg, but there's still work to do there.

Let's have an art dump of recent arts.  I seem to be painting quite a lot at the moment, which is partly because I'm feeling a bit tense and painting is a good release for that. 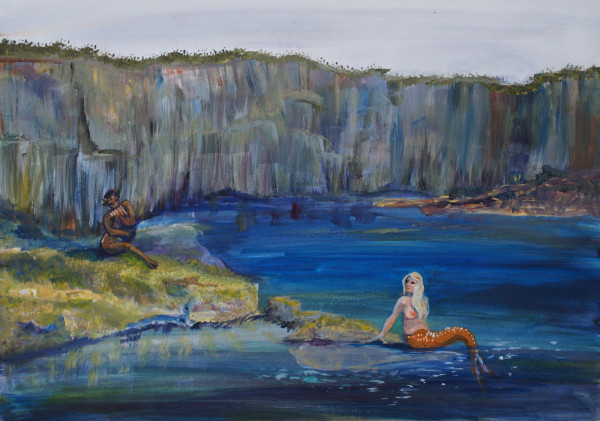 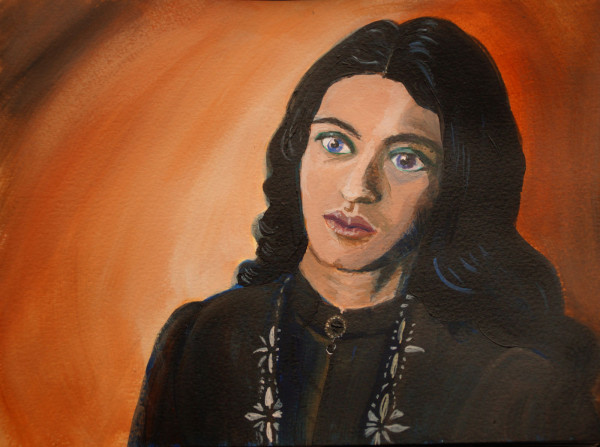 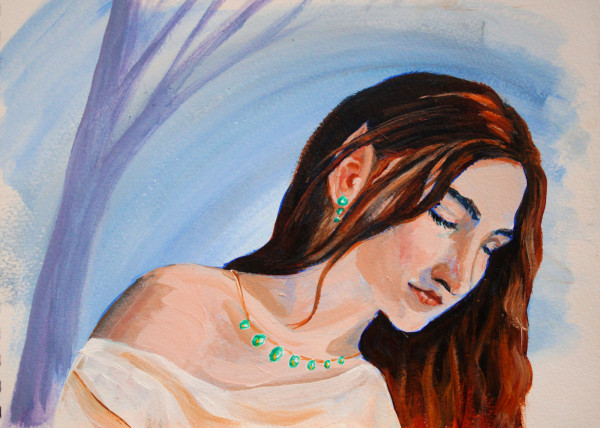 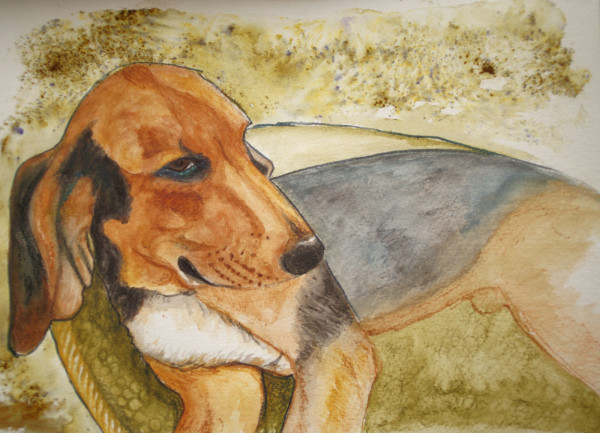 I bought some tiny A6 watercolour paper postcards, and the next three things are things I drew on them. The only downside to this is that when you photograph them they look like they are the same size as the big paintings, and of course they are really much much smaller. Possibly I should include something for scale in the photo...., but anyway, here they are. 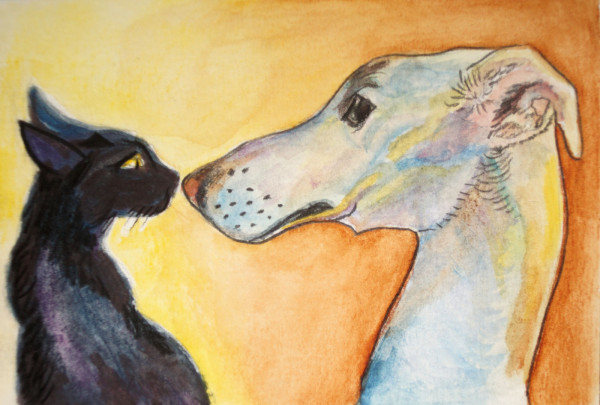 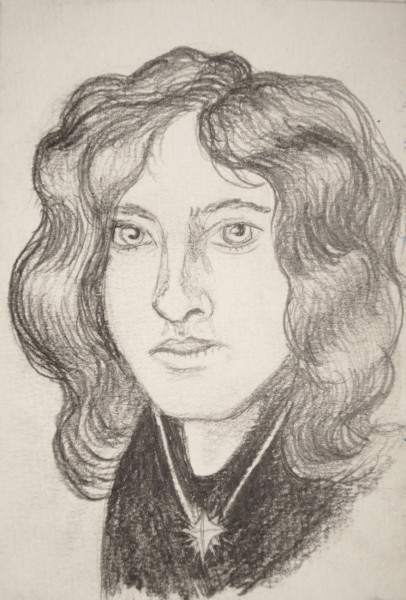 And here's an A4 pencil & watercolour Feanor & Nerdanel. 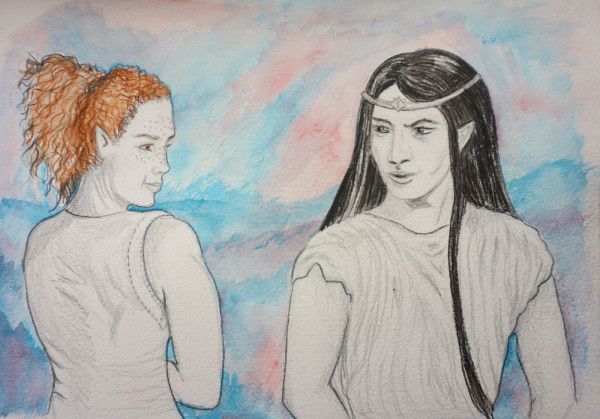 Have I not posted this one here?  I don't think I have. I'm putting this one in a local art show, titled 'Heralds of Spring'.  I'm quite pleased with it: it's fairly large, at A3 size, and looks quite good framed with a nice dark red mount around it. 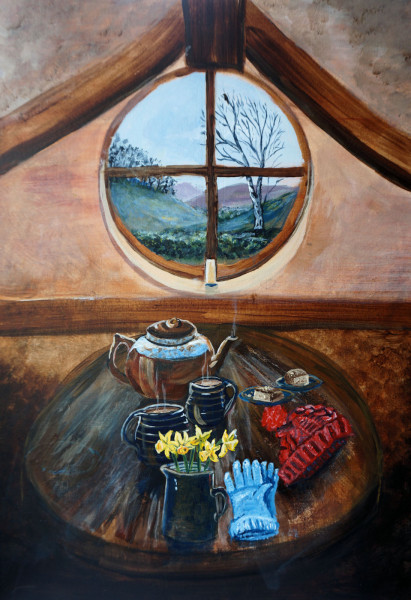 That art show said that it particularly welcomed small works less than 20cm square, and I didn't have any 20cm things that fit the theme so I LIED outrageously and said I had a painting called 'Light from the shadows shall spring' that was the right size. I will paint one. Not sure what it will look like yet.

Oh yes, and here's a little A4 painting of some Queen's Thief characters. Again, a bit small, but I quite like the layouts. 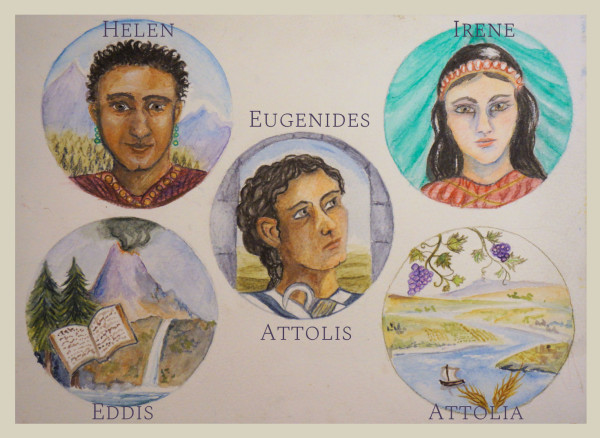 What else?  Oh, we're practicing pale flesh tones at art class, in preparation for a momentous day to come where there will be A LIVE MODEL to paint.  I have painted rather a lot of portraits recently, so I am halfwaythrough a large painting of a Beholder, complete with 10 eyes on stalks and a mouth with dagger-like teeth.  But it *is* pale flesh toned.

And Finally!  I am offering art in both the Fandom Trumps Hate and Fandom For Australia charity auctions, and to my extreme delight, someone has actually bid on my Fandom for Australia offer!  Two people! Woohoo!

But I am suddenly exhausted from typing all that, so I shall simply link to this tumblr post about that rather than pasting it all in.