It’s hard to work out,with art, what is ‘good enough’ to show online, to give to people as a gift,  and most of all, to sell.  I am still struggling to work it out. If I paint something, and show it in one place – on tumblr, say, or on Deviantart – and it doesn’t get many people interested, in terms of likes or reblogs or whatever metric you use is that because I didn’t show it to enough people, or because it’s not of a high enough standard for anyone to be interested in it yet, and so I need to work for longer on technique? Or is the subject only of interest to me?  Or should I take a new approach to what I make?

Or... is it simply that I didn’t show it to enough people for it to find an audience? No image is going to appeal to everyone, and it’s entirely possible that the first ten people will dislike something that others would like. Or that the timing of sharing it was off. Or that I haven’t yet shown enough art on that platform to convince a significant number of people that they would like to see it more…

The question of ‘is it not good enough, or does it need more marketing?’ is such a hard one to decide on. You don’t want to bore your friends with things that don’t please them, after all.  Let alone things that are not well made. (I am excluding from that those die-hards still reading this. If you haven't filtered out my arty stuff tag by now, your eyeballs must be very hardened. )

I made a facebook page for my arty stuff this week. Still not entirely sure this was a good idea, but since I am making all this stuff, it seems daft to just shove it all in a folder, I might as well circulate it around a bit.   We put some of it in the Shop on the Borderlands too, and in a webshop on my personal site.  Which raises the problem of pricing, and the whole issue of 'well if you price it really cheap it looks like you don't value your time' versus 'it would be rather nice to rehome at least some of this stuff, it is starting to pile up', versus 'well, but also need to cover p&p...'   Someone from Germany did buy a t-shirt of my Smaug over laketown pic the other day on Redbubble, which was very life-affirming.  It was like: AHA a complete stranger wants to wear this???? !!!!

Anyway, on Friday I made this in art class (well, I made some of it last week but this is the finished version.) It was supposed to be a 'how to paint mist' practice, but I'm pleased with it beyond a practice piece.   The figure is inspired by a free stock photo by Marcus Ranum, who is a very public-spirited soul who enjoys taking highly professional stock photos and giving them away to people to use for art.  I'm not sure I've quite managed to catch the texture of silk, but it's not bad.  I probably can take from this that I should work harder at sourcing reference photos.. And then last night, we were watching Star Trek Discovery, which is a series that I find I really enjoy.  It's a bit darker than the usual Star Trek fare, and although I fear they aren't going to go the whole way to my favorite theory, that the Federation from Star Trek and Blake Seven are the SAME Federation, seen through different eyes, there are enough questionmarks over the behaviour of Starfleet to please me.

Anyway, we were watching that, and I painted this tiny A5 painting, using as a rough reference A Nude Woman Kneeling at the side of a Reclining Man (Study for Mary Magdalen Lamenting Christ),1857, by Julius Hübner (although why it is called that, I cannot guess, because Mr Hübner has clearly put a great deal more work into the Reclining Man, who is also pretty much nude, than the Woman, who is only faintly sketched in.)

Anyway, here they are: Idril and Tuor, escaped from war in Middle-earth to some beach in the distant West.  This is actually acrylic, but weirdly, painting it on cold-pressed watercolour paper has made it look really quite water-coloury, at least on the background... 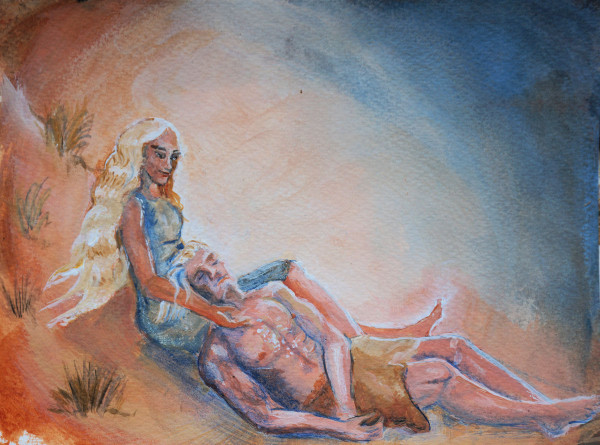 It was Nolofinwean Week on Tumblr.  I am rather unsure about the title.  I feel the Week of the House of Fingolfin would have a better ring to it and be more comprehensible to the casual viewer, but hey, it's not my week, so no skin off my nose.  I was wrestling with servers this week, so I went for quick inkpencil,brusho and ink paintings.  They are all A5, so pretty small too.
Aredhel: 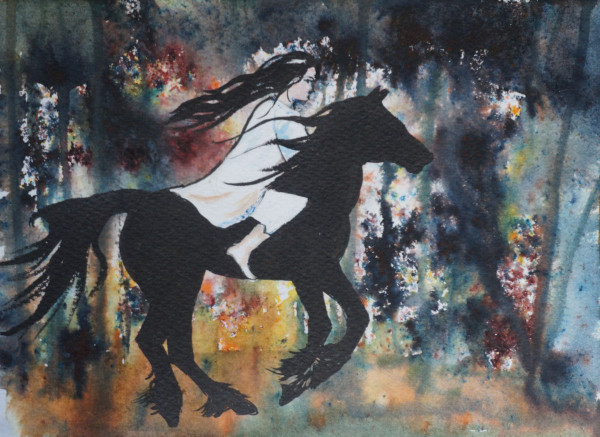 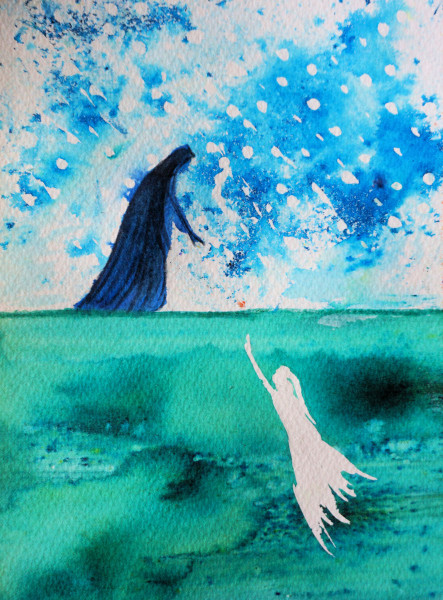 Fingon driving off a young and goofy-looking Glaurung: 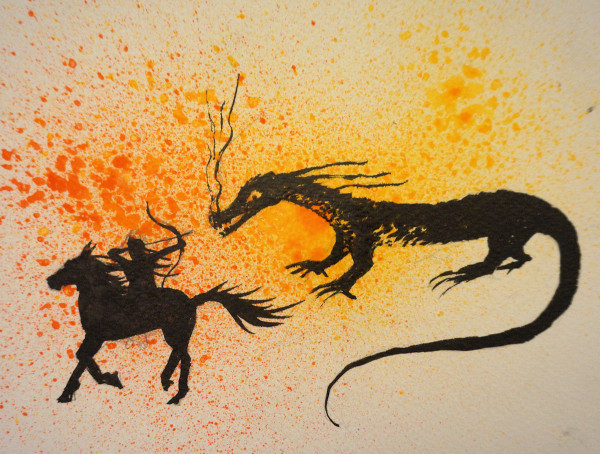 Earendil guiding Elros (in a ship with an eagle figurehead) to land in Numenor. 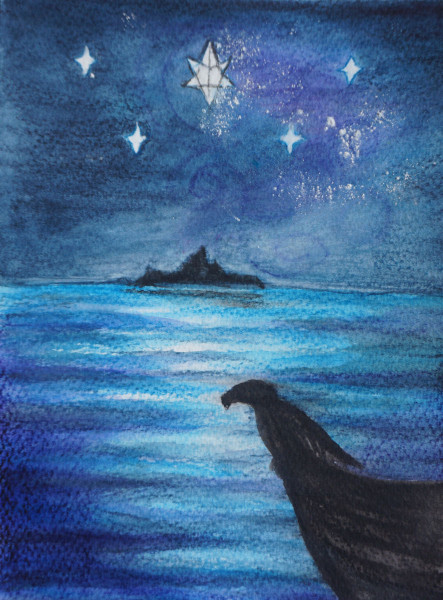 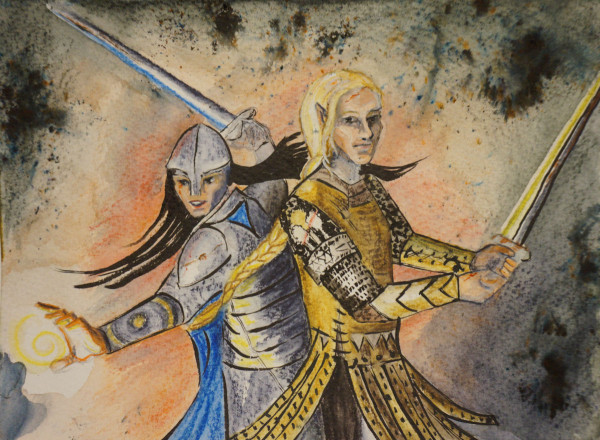