First of all, I managed to find things to put the elderberry wine in (though I chucked out the dregs rather than filtering them because I already had more elderberry wine than I am likely to drink.  Although I do rather like it, particularly with ice.  I know you don't usually put ice in wine, but then, this is rather strong wine, almost like sherry really.)

And then last week in art class, I made this: 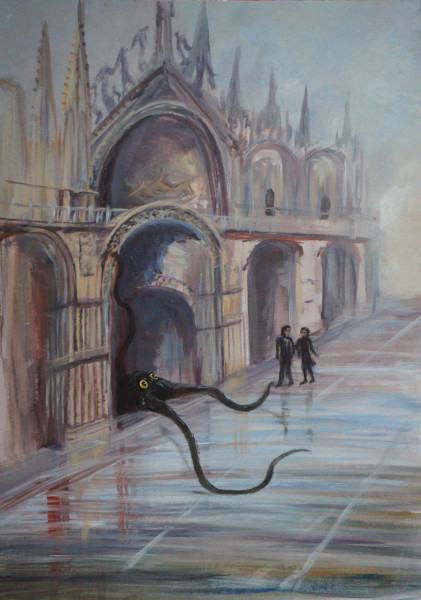 It's a painting of St Mark’s basilica in Venice, done as an exercise in painting misty buildings from a black and white photo.  I decided it would be better with tentacles.

Oh! here's a photo of the 'Other Subjects' class at the show. The swan on the right won, but I don't like it very much, personally, and then the running horses, and my lion and unicorn came third, top left.  Clearly the judge liked animal pictures!   I felt that the girl walking away from the flowering garden into the darkness of the woods by my friend Pat was slightly robbed, tbh, if I was choosing one, I would probably have gone for that. I really like the figure and the lighting.   Still, Pat came first in the art classes overall, so she wasn't bothered! 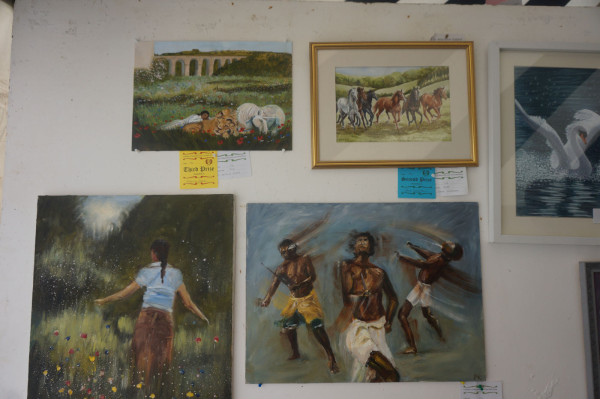 And then I spent some time playing with Brusho pigment, inktense ink pencils and spray ink.  This was the best one I made, after some experimentation, and I'm going to note the experimentation in the hope that I might rememberwhat order of things works best: 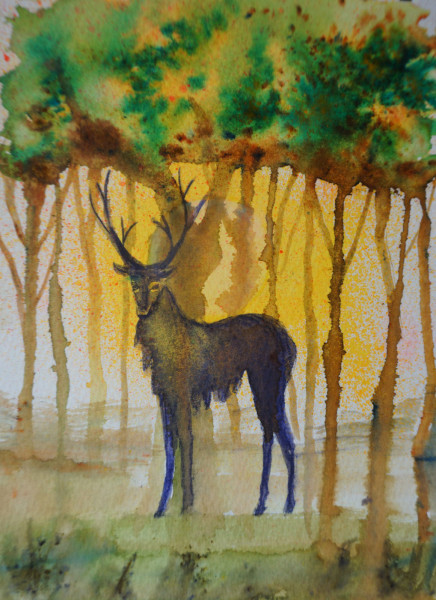 I started with light. I used a spray bottle of yellow ink to make a spot of yellow in the middle of my picture that faded to white all around, and then a very small spray of red ink around it to create a slight darkening/reddening around the edges.  Once that was completely dry (vital so the ink would not run!  Ink stays put once it’s dry (mostly) whereas watercolour can be re-wetted and will run and move more.)

I painted the top of the image with plain water, and added Leaf Green brusho pigment to the top of the wet area.  Then I sprinked Moss Green and Sandstone pigment at the bottom of the wet area, stood the picture up vertically, and dripped water here and there so that the wet pigment ran in mingled streaks down across the dry yellow ink sunburst.

The painting below was created in the same way, but without the ink sunburst: this was my earlier draft.  It’s still quite a pleasing thin forest, I think. 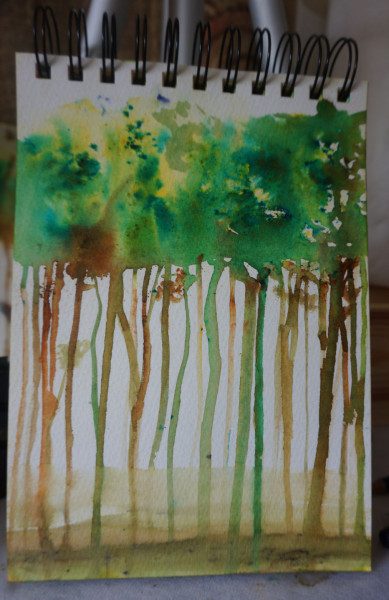 I love the way the Brusho pigment makes random patterns and speckles of light when applied to wet watercolour paper.  (You do need a thick good quality watercolour paper for this kind of thing, so the paper doesn’t crinkle.These are all quite small, A5 size, which also helps.)

I brushed the pigment across the bottom with a wet brush, just to create a foreground, and added a little more moss green foliage at the bottom.

Then, once the trees and grass were dry, the last step was to draw a deer.  I used a purple Inktense pencil for that, and then carefully washed over it with water.  This allowed some of the yellow ink to show through the purple layer, and re-wetting the Brusho trunks underneath the deer gave the purple a good varied colour so it sat well with the rest of the picture rather than looking stuck on.

I tried the same idea here, but without the yellow ink undercoat and with a figure instead of the deer, but it didn’t work quite so well. Figures still need more work... STILL. ARG. 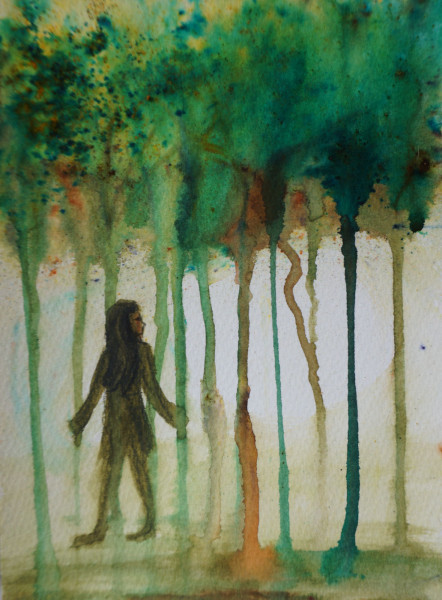 With this one, I tried sketching the figures first, because it's much easier to sketch figures in pencil onto plain white paper than onto paper that's already got Stuff on it.  They were quite good figures but unfortunately the Brusho had other ideas and went a bit sploppy. I think maybe this might have worked if I'd used a rubber mask over the pencil.  With the inktense pencils, they only go watercolorythe first time you wet them, after that they dry and are colourfast like ink. But that doesn't help if the watercolour pigment decides it's randomly going to pour in the wrong place... hmm. 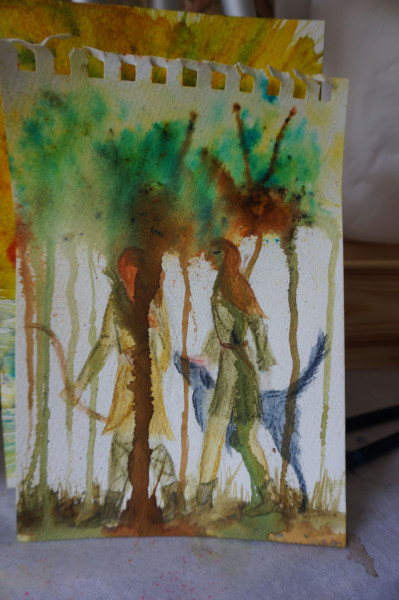 Before I started playing with the idea of drips forming trees, I first tried them creating the under-water stems of golden water-lilies.  I think this would have worked a little better if I had given the lilies a bit more space and drawn them out more carefully. 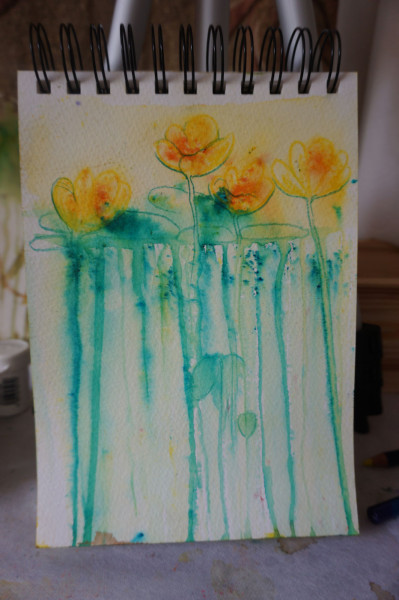 This was my first attempt at putting the Brusho colours onto wet watercolour paper, and then tilting the paper to make the pigments combine.  It’s 100% abstract, but I rather like it.  That’s how  I ended up  with the idea for the lilies. 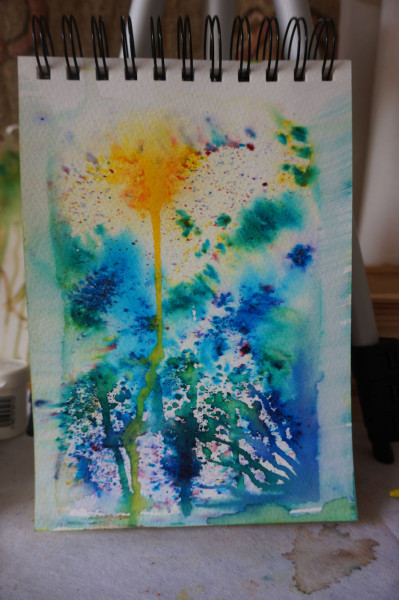 And finally (this post is all the wrong way around) this is the first picture I made in this session. I drew the dog first, using Inktense pencils, then I masked over her with a liquid rubber mask.  Then once the mask was dry, I water-painted the whole thing and started applying a mix of dry brusho powder to see what would happen.  What happened was quite colourful! 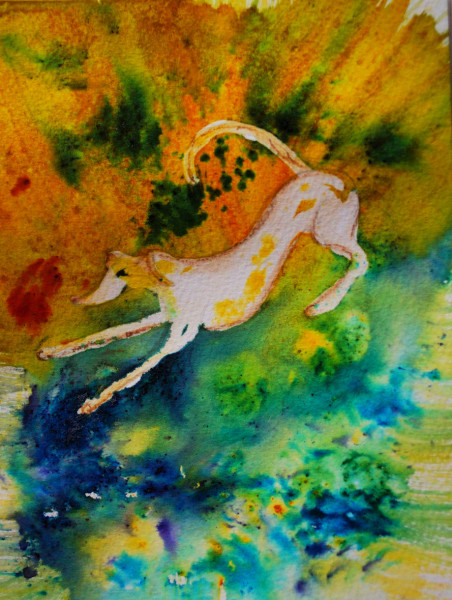 The hardest thing with Brusho is to restrain yourself from putting too much on.
Tags: arty stuff, brusho
Subscribe