What I did on my holidays

This is partly because I and Rosie went away with my Mum to stay for a week in Maldon, which is where she was born and lived until she was 18 and wiped the Essex mud off her feet with alacrity, to go off to university.

Although Mum still has cousins in Maldon, and we've seen them occasionally, I'd only actually been to Maldon once, when I was... probably about six? For a family wedding.  I can remember almost nothing about the place from that visit but a vague impression of mud.  This proved to be accurate, as far as it went, although actually Maldon is considerably more pleasant as a place to visit than I was expecting.

First of all, if you ever need to go from Cornwall to Maldon, do not go on a Friday.   The route involves the M5 (holiday traffic going home and on holiday) the M4 (Contraflows as far as the eye can see!) and the M25, which as we all know is specifically designed to be the shape of the character Odegra, meaning “Hail the Great Beast, Devourer of Worlds” in the language of the Black Priesthood of Ancient Mu.   Then after that you get to do the A414 which for a busy multi-carriageway A road is in appalling poor condition, and has so many holes and patches that driving on it at more than 60, which everyone does, feels like it's going to shake you apart.

I am SO GLAD my ancient battered car has working aircon, because the temperature outside the car got up to 32 at one point, and a lot of the way there we were travelling so slowly that we were driving along spotting wildflowers in the verges and central reservation of the motorway.  It is definitely the season of the pink-flowering Common Mallow, but we also enjoyed seeing yarrow, ox-eye daisy, corn poppies, fleabane, fox and cubs, mugwort, hawkbit and an amazing selection of vetches among many others. And we also enjoyed the butterflies although we were not quite going slowly enough to identify them, but it was close.

However.  We got there, and we also got away again. Here is a picture of Maldon.  As you can see, small bunn was correct: it is very muddy. 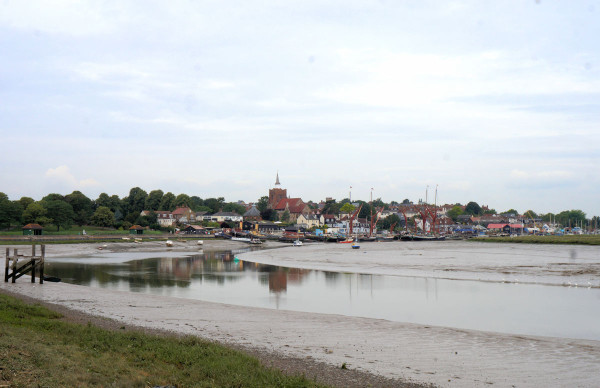 Apparently my mother went swimming in this tidal swamp, and my maternal grandmother had a life-saving medal that she won for swimming in it.  Obviously this is the lowish tide version, but still.  It just doesn't seem a promising place for swimming.  So. Much. Mud.

There is an awful lot of water though: rivers,canals and the sea, and many many boats.  You can just see the tall red sails of the Maldon barges in the photo above.  These are heritage vessels doing leisure trips now, but they were working boats when my mother was a child.

Here's one setting off on a pleasure-trip.  They are all fitted with motors now, I'm not sure if they put the sails up once they are further out. Hope so.   The people in the foreground on the quay were crabbing, I think. 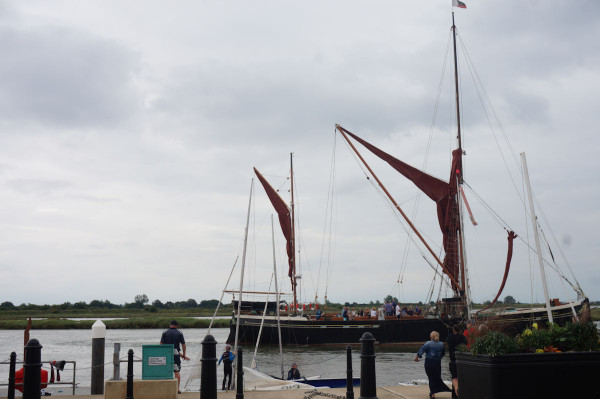 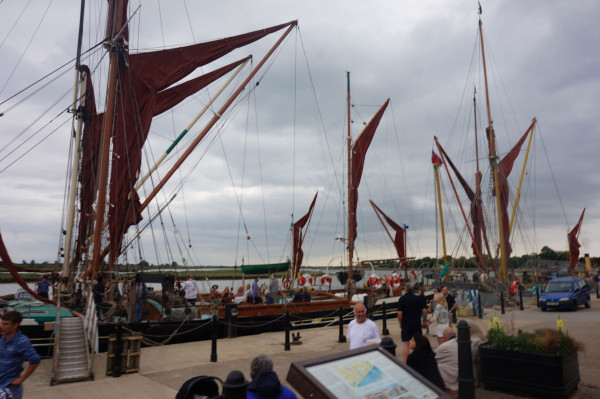 One of these - I think the one on the far right - is Pudge.  Pudge was one of the Little Ships that went to Dunkirk for the WWII evacuation. There were three Maldon Barges that went to Dunkirk, all three were blown up, but Pudge 'came down the right way up' and managed to get home again with some of the rescued crew of the other ships: Pudgemade three trips to Dunkirk, and rescued 1,300 troops, apparently.  A wild history!

These are sea/estuary ships, but there were canal-boats on the many canals, too. Leisure boats again, of course now.  But Cousin Maureen told us that when she was young, she and her partner used to get onto the canal boats, travel up stream paying their passage by working the canal locks, and then get off when they got to Chelmsford and take the bus home to Maldon.  Which is a rather lovely image.

Here is a picture of me in Maldon, drinking iced coffee at one of the many many cafes.  I was astonished and delighted by the sheer number of small independent shops and cafes in the town.  The chocolate shop, run by a bloke who had moved from the East End of London 20 years back, so he told me with little provocation, is particularly nice.   This cafe served Rosie a sausage, which she greatly enjoyed.

This photo is before I washed my hair in the Water of Maldon, which made my usually-obedient hair VERY EXCITED. It was something of a struggle to get it all into a pony-tail by the end of the week, since it appeared to have tripled in size. 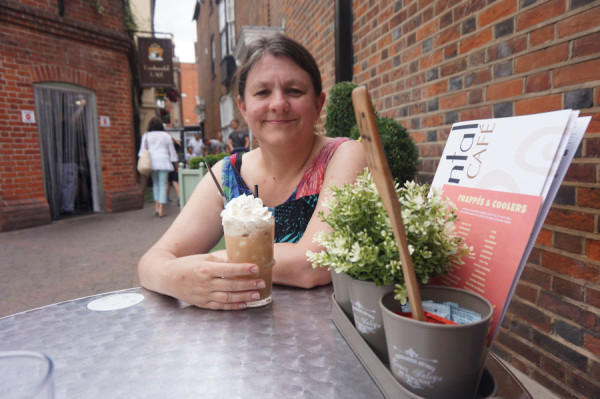 And here is my Mum, being Pink, in an environment of Pinkness. 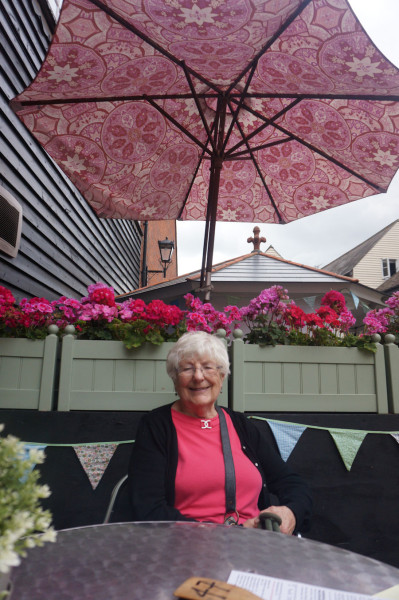 We went to explore Maldon High Street, and see if there was anything about it Mum could remember.  We found this spot, next to the King's Head pub, which was also a cafe back at the end of WWII, and still is, though not by the same name.  This is where my mum had her first-ever icecream, after the icecream famine of the war years, and found it sadly disappointing. Very watery, apparently. 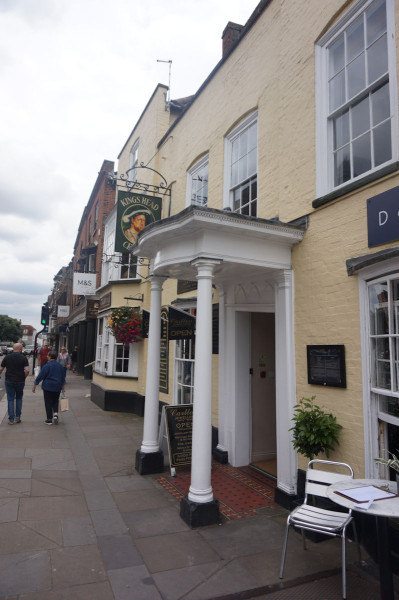 We went over to Great Totham, where my mum's father lived once he had retired, and walked to Little Totham, where my parents were married. It was rather a longer walk than we had realised, but the church itself is very pretty, and very old: the main building is 12th century.   Those walls all full of little round flints embedded in lots of cement, the red roofs and the weatherboarded steeple are all very Essex. Weatherboarding in particular was everywhere, and you just don't see that here on the west coast. 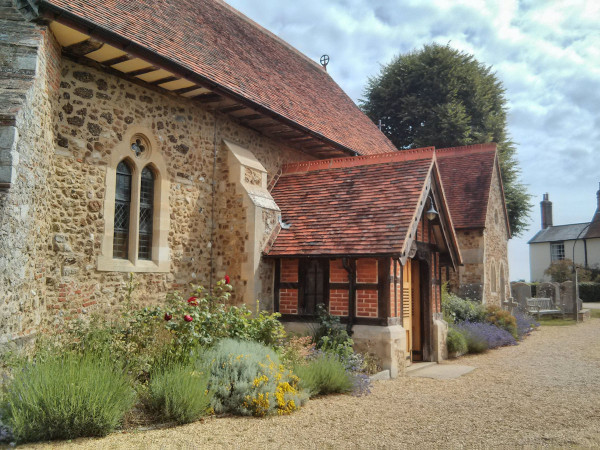 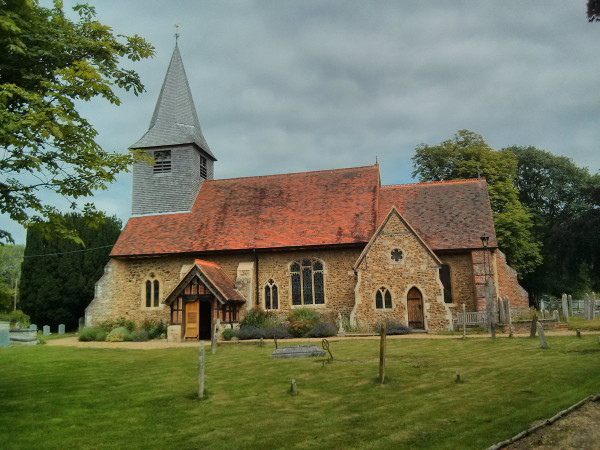 Here's Rosie in the garden of the place where we stayed, Beeleigh Falls. We had just one giant room, but there was lots of garden, and just off on the right of this photo was the tidal river Chelmer, and a tiny landing stage. 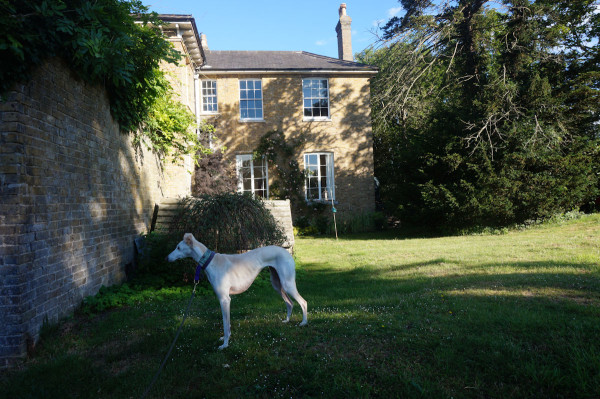 They let me borrow their canoe!   So I paddled up the river a little way, to the place where there's a sluice that drains the canal, about 3 feet higher than the river at high tide, and a bridge that runs over the sluice. Aluminium canoes are delightfully lightweight. 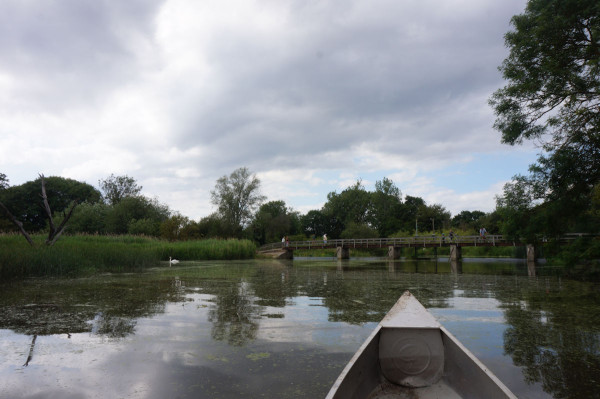 I even persuaded Mum into the canoe at one point. 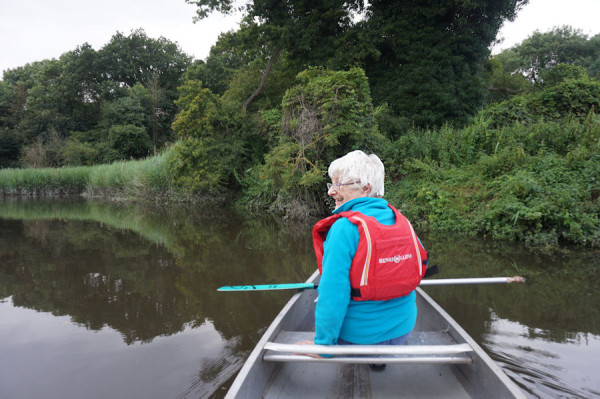 But not Rosie.  I wasn't quite confident that Rosie would enjoy the trip so we left her in the room napping.
Here's a random swan who went flapping by just as we had got the canoe out of the water after the last trip:

There was one day when we decided to let Rosie choose her own direction for a walk.  Of course, she unerringly chose an overgrown footpath across fields of wheat and barley. 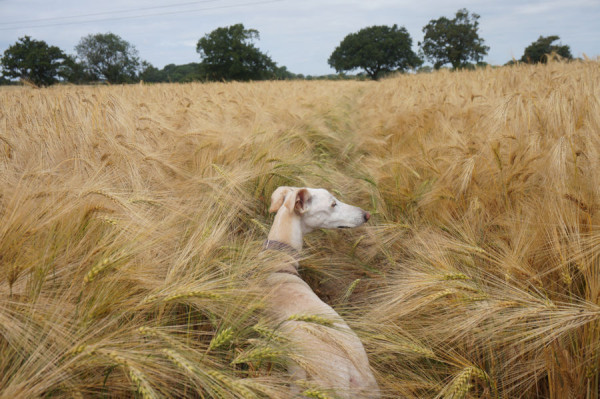 But, after we had followed it for a while, there were corn poppies, and suddenly all around was full of bees and hoverflies!  Good choice in the end, Rosie, though we had not planned to walk quite so far... 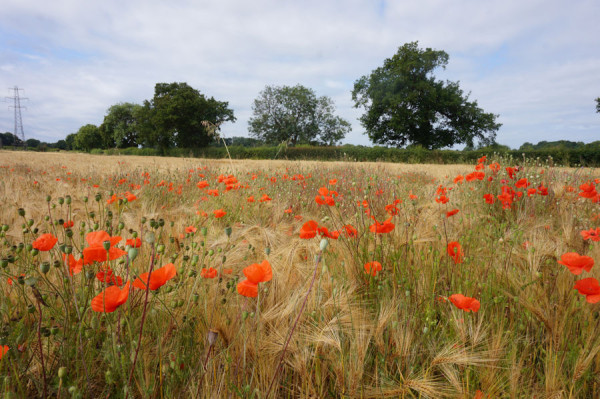 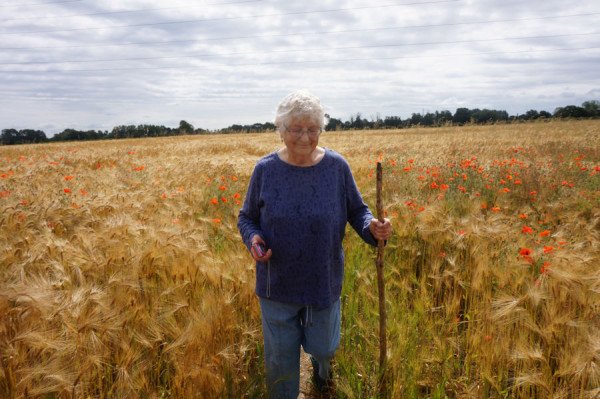 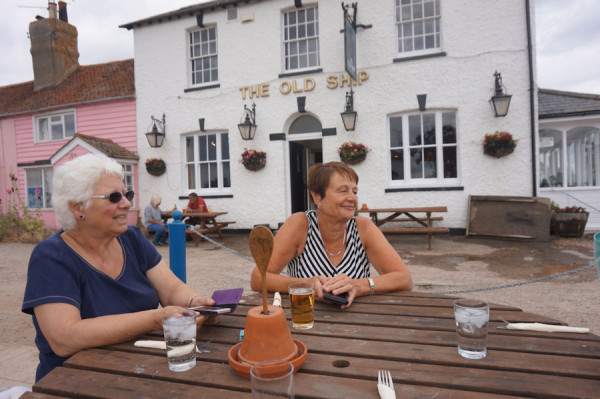 And here are some seagulls taking advantage of the remains of a pub lunch with boats, locks etc in the background. 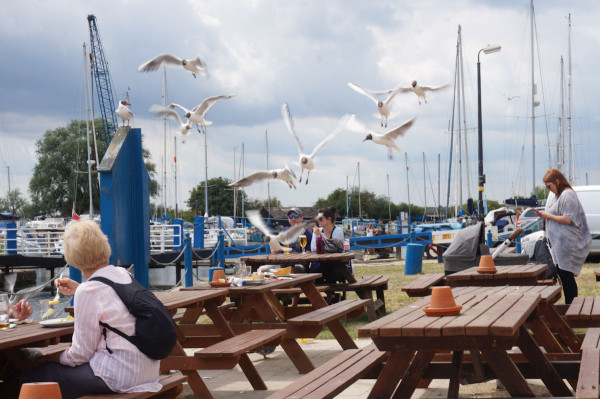 Rosie was fascinated by this garden of animal figures visible from the towpath, and spent ages staring at (I think) the giraffe. Or maybe the warthog. One reason I particularly wanted to go to Maldon (as opposed to Mum,who just fancied a return to the homeland to see what was still there) was because of the Battle of Maldon. I like the poem, I like Tolkien's fanfic of it : The Homecoming of Beorhtnoth Beorhthelm's Son, and I quite fancied having a proper look at the place it happened.  There is a statue: 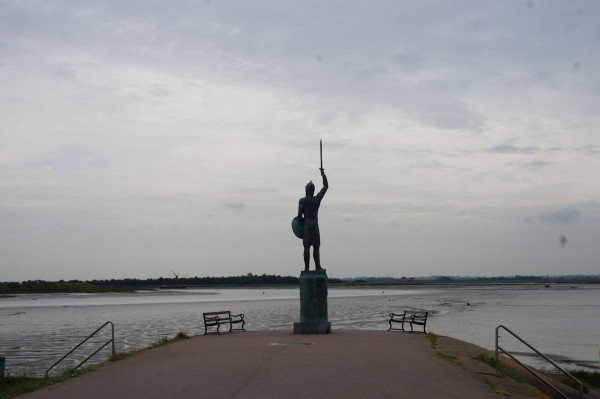 It's very pleasingly positioned, but a little disappointing on close inspection.  I expected Beorhtnoth to have a bum. And muscles.  He's a bit of a bumless wonder in this statue, and since his mail has been rendered by basically covering a figure in mail-effect, the result is to make him look generally oddly weedy.   There's a plaque next to it, written by someone who is very definitely on the side of 'Beorhtnoth did nothing wrong!'  with no acknowledgement of the criticism voiced in the poem that he was over-proud and allowed the Vikings an advantage.

I tend to be in favour of this, but my Mum is more on the side of 'Beorhtnoth was ofermod'  We debated this as we went our way slowly along the estuary towards the official battle site, passing a graveyard of barges being serenaded by an elf with a guitar:

The footpath along the shore is rather lovely: lots of wildflowers, particularly unfamiliar saltmarsh types such as sea lavender, and oodles of butterflies.

At last, we reached the causeway to Northey Island, where supposedly the Vikings landed, and where Beorhtnoth allowed them to cross the water of the River Blackwater so he could fight them on the mainland (he lost...).  Here is Rosie, standing ready to repel Vikings. 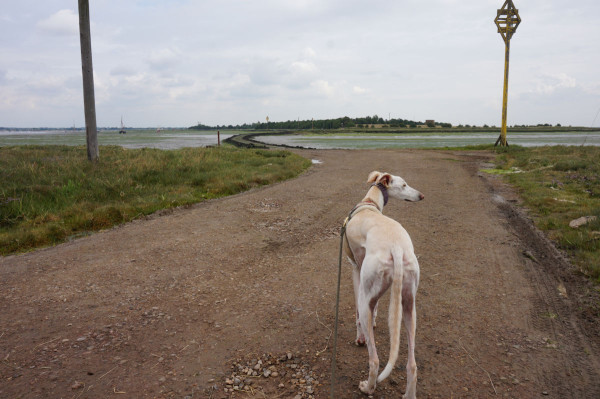 ... and some of the many many grasshoppers that sang to us on the way back. 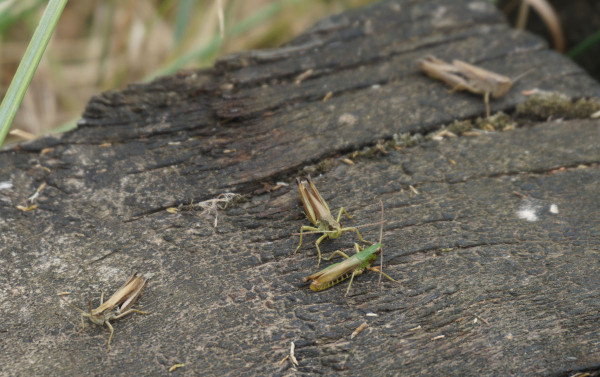 Eventually we got back to Promenade Park, where after lunch, Mum, apparently undefeated by all the walking, went to the local museum to see if she knew anyone in it.  (She did)  The museum isn't dog friendly, so Rosie and I sat outside on the grass, and I did some painting while Rosie napped and generally recovered from all this enthusiastic walking, exploring, etc.   I painted an Oat, invading a field of barley, 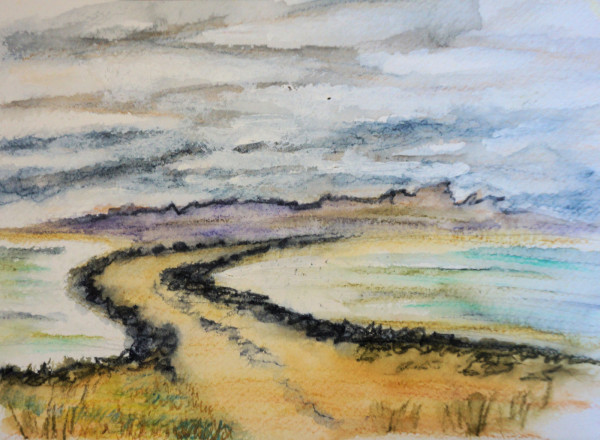 (both of these are little A5 paintings using inktense pencils and a waterbrush, which is a very portable approach to painting.)

This is a bigger one I did later, in acrylic: 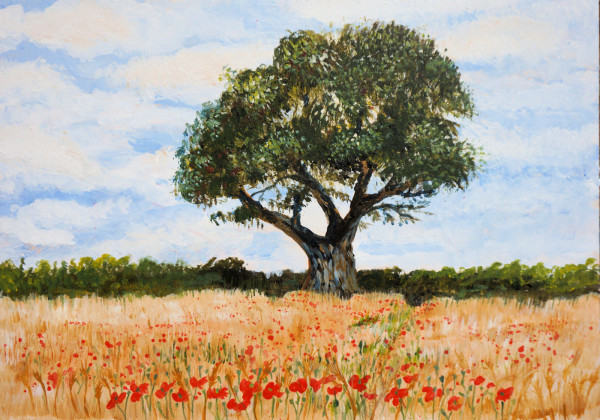 What else did we do? Oh yes, we went to Colchester.  I don't recommend going to Colchester, and shan't do it again.


And we went to Danbury, where Mum lived from the age of 12.  They had a house that is now a dentist's surgery, but in those days, was half a chemist and half a drapers shop.  The drapers was run by my grandmother.   We went to the church, and saw the little animals on the pews, which I would have photographed but there was a service going on so it seemed a bit rude to intrude, and also the Mulberry Tree that my mother remembered fondly in the churchyard, which was not only still there, but was covered in ripening mulberries!  We also found my Mum's parents grave in the churchyard.

Sadly, however, Danbury is now a bit of a traffic nightmare, with constant cars and lorries thundering through, and a lot of new building, so we didn't stay long there.  On our way home, however, we did dip into Danbury Park, where mum used to walk her dog long ago, and looked out across the little lake.

But I think my favorite thing near Danbury was Papermill Lock, which had been recommended to us by Essex Cousin Angela's grand-daughter Poppy, and where we went for coffee and a gentle stroll. It's a lovely place, the water very clear, and lots of little boats. There were a number of these micro-canalboats.  I wonder what they were made for? 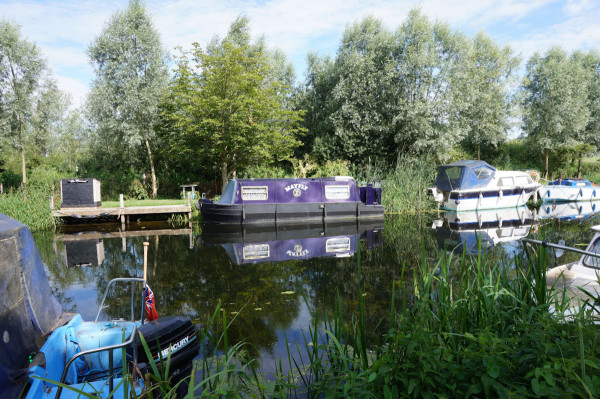 And a lot of golden water-lilies. 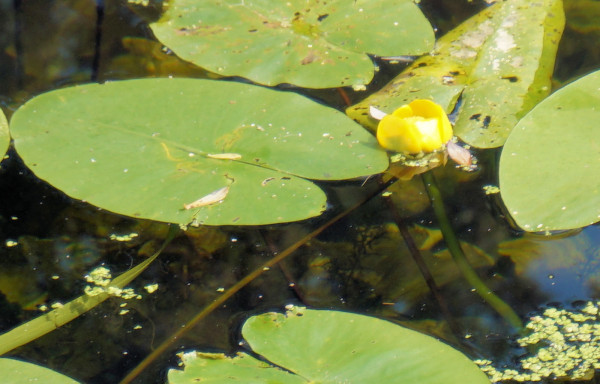 We drank coffee and watched people prepare to take a canal-boat trip (which looked rather warm and stuffy).   Really, it would have been perfect if only they had served sausages for Rosie. 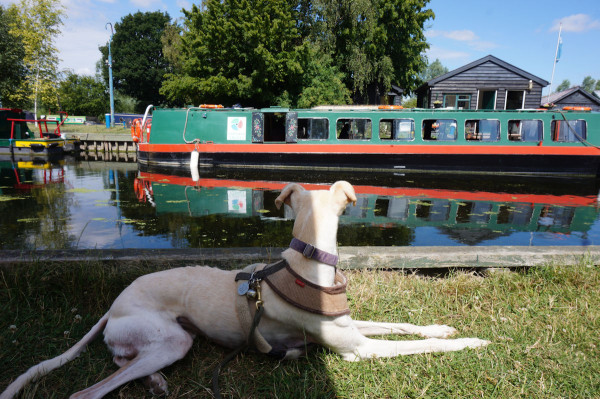