The time has come, the Walrus said, to talk of many things

Because I have not posted for a while, and this is potentially DISASTROUS as I rarely remember things if I don't write them down.

- Yesterday I took 8 large paintings, four small paintings and 5 paintings in mounts and envelopes for the 'browser' (which is one of those y-shaped floor stand things where you flick through a bit pile of art) to Tavistock, for the Tavistock Group of Artists annual exhibition.

I helped put up the screens on which the Art will be displayed. (And was amused by the elderly gentlemen who rushed to take the heavy screens from me, a Mere Woman, and then found them heavier than expected.  I don't know why they think their precious Y chromasome trumps the fact that I'm 10-20 years younger, but I suppose that's chivalry for you.)

I had to get most of the pictures into frames (I paint mostly on standard A3 artboard, which has the advantage that you can buy standard sized frames and mounts) get D-rings and strings onto them, and sticker up the backs with labels and prices.  It's a faff, this dealing with actual objects.  But they do look better all framed up and mounted. (Apart from the box canvasses, which don't need frames, you can just paint the edges.)

- on Saturday, we watched the Chernobyl HBO/Sky miniseries.

Wow.  I had no idea that the Chernobyl disaster was not a pure unforseen accident rather than what appears to have been a cocktail of really terrible management, secrecy, and ambition combined with a near-insane lack of caution.

Apparently the writer who came up with the idea said : "The lesson of Chernobyl isn't that modern nuclear power is dangerous. The lesson is that lying, arrogance, and suppression of criticism are dangerous".  And it very definitely got that idea across, although I for one also took away that 'modern nuclear power is dangerous'. It was beautifully made and very upsetting.  Particularly the scene on the bridge with the people watching the fire blazing at the reactor, and the children playing among the falling ash.

It was also an interesting exercise in the power of context.  There were the usual ad breaks with ads for holidays, mouthwash, insurance instead, and they all took on a bleakly nightmarish horror when viewed between episodes of nuclear disaster that I am fairly sure the advertisers did not intend.

It also created an interesting link with another superb miniseries we watched recently, Good Omens, which begins with this statement:

Which provides a nearly complete explanation of Chernobyl, really.  Fortunately neither miniseries ended with the threatened Apocalypse, though Chernobyl was 99% more depressing than Good Omens.

I can see many fun re-watches of G.O. ahead, but I shall probably never rewatch Chernobyl, though I thought it was brilliant, and I am very glad I saw it.

Also on Saturday, we got rid of a couple of chairs that have been lurking in the diningroom by advertising them on Facebook as free (because the cats had had a go at them and they were quite severely scratched) A lot of people wanted our scratched chairs, but it proved oddly difficult to get someone to actually come and take them: the first person dropped out, so I contacted the other people who had left messages, but ALL 6 of them had already sourced other chairs!  So I advertised again, and second time lucky.  But clearly free things move fast on Facebook, and now I have space for some shelves for art supplies, which is welcome because at the moment they are not so much stored as strewn.

What else has happened?  Oh, Fankil continues to improve and become less scaredy.  He often hangs out in the livingroom in the evenings, and also you can now rub his ears and his tummy and he purrs!

Took Rosie up to the hill-fort yesterday, and she hared about looking for rabbits, then well, OK, she didn't exactly come back, but she did stand still and let me put the lead back on, which, in a large empty space far from roads, will do.

Oh, and because I had some spare Perspex, I decided to try a design that could be painted on Perspex to be mounted in a window.  Glass/Perspex paint really shows every blob or hesitation, so I drew this out several times before deciding on this design: 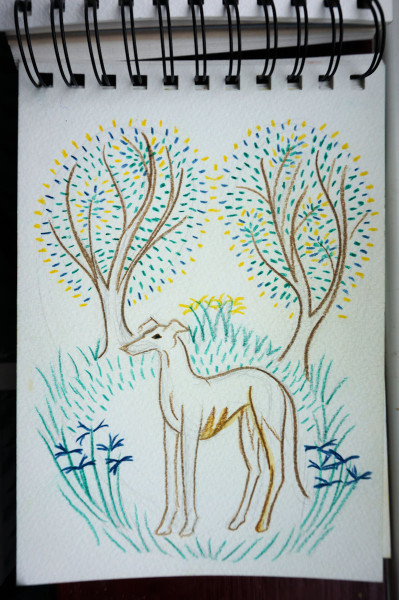 Of course, putting it on the Perspex meant a few changes, and I'm not sure the dog works. I might rub that bit out and do it again. But I like the trees. 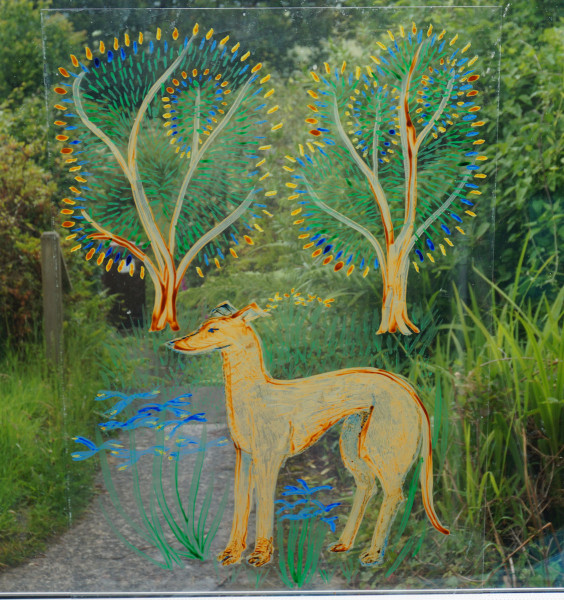