Making an exhibition of myself... 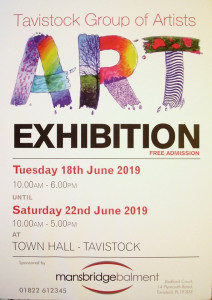 I have taken a VERY deep breath, and arranged for  a whole bunch of my paintings (8 large, 4 small, and 5 mounted but not framed) to be shown at the Tavistock Group of Artists exhibition in the Town Hall in Tavistock from 18th to 22nd June, including my Daughters of the Rivers series.  All the paintings will be for sale : eek!  I had no idea how to price them, except that the exhibition rules said that the large paintings must be at least fifty quid, and the small ones at least 20, and I have a vague rememberance from seeing what people exhibited last year that a lot of people went for roughly double that plus the 30% commission so I stuck my finger in the air and guessed wildly.  If anyone buys something I shall be enormously pleased with myself, but even if they don't, I'll have made an effort and Done A Thing and I hope they won't look too embarrassingly amateur among the efforts of professionals.

I’ve also had a couple of paintings accepted for the Tavistock Heritage Trust exhibition to  celebrate Tavistock’s status as a World Heritage Site (ie, it's RIDDLED WITH MINES) in Tavistock’s Butchers’ Hall,  Wednesday 26th and Saturday 29th June. Doors open to all between 10am and 4pm, and there will be a special family event on Saturday 29th (??!!).  What the hell, I thought, so my two paintings (one of ghostly balmaidens and one of the ghostly bargeman and his horse by the canal) will be for sale in that too.  If someone buys either of them I shall be surprised, but again, vastly delighted, and if they don't, then at least I showed them off!