This time, a ghostly barge-horse and bargeman. 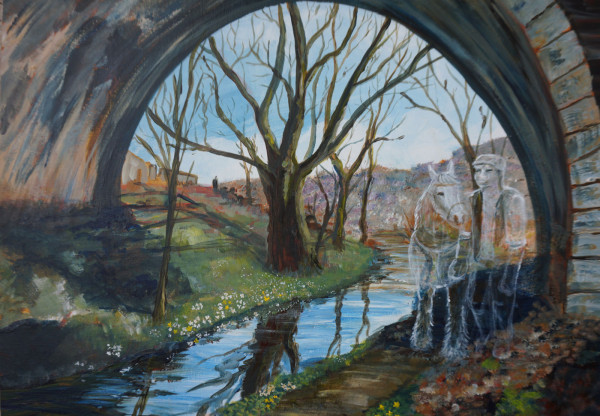 They are walking along the Tavistock Canal,  under the railway viaduct.  I walked this way in early spring a couple of years ago and tried to take a picture of the white wood-anemones and yellow celandine flowers along the banks, but they didn't really show up at all in the photo, so I thought I'd try painting them.  Then I added a pair of ghosts, because, as my art class says 'you always put in something weird, what is it this time???'

The canal was built in the early 19th century, to carry goods, and particularly the products of the mines, down to the Tamar River and on to Plymouth.   As so often with mining projects, it ran into difficulty at the point where the builders had to drill a tunnel through some unexpectedly hard rock, and by the time the tunnel was completed, the price of the copper that it was designed to carry was already falling.   It was built to have an unusually high flow rate, the idea being that this could power water wheels used by industry along the canal, creating further products for the canal-boats to carry, and also power the inclined plane rail to transport goods from the canal down to the river 72 feet below it.

The canal is still not just decorative even now.  It powers a hydro-electric power station, and has done with quiet efficiency since 1933.

The railway that runs over the viaduct above was completed in 1859, and quickly killed off the canal as a working waterway.   Now the railway is gone too.