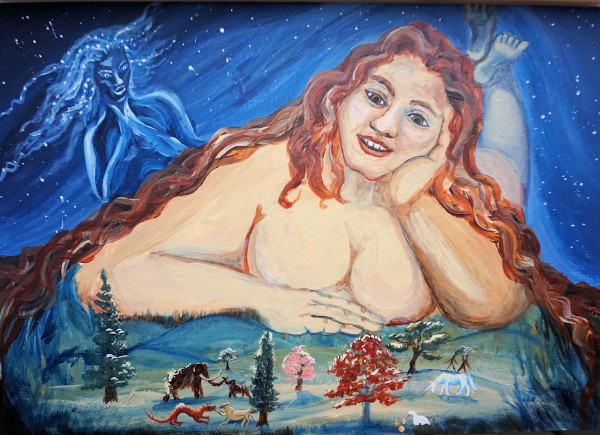 Yavanna shows off some of the trees and creatures she has made to Varda.
My Yavanna is a large round lady because she’s in charge of nature, fertility, the harvest.  Her shape is inspired by paleolithic Venus figurines, like the Venus of Dolní Věstonice; one of the the oldest ceramic objects still surviving.  It's  dated to 29,000–25,000 BC! (Imagine, an item 'dated' to within a range of 4000 years...
(But also because it’s fun to paint people who are different sizes & shapes!)

I took this to art class on Friday and Colin the Art suggested the positioning of Varda at a cross-position to Yavanna, to stop the eye slipping sideways.  I wonder if I should have made her a bit bigger.  I was thinking she was in the sky, and so Far Away.
Weirdly, I posted this painting on Tumblr and it didn’t get flagged.  I was expecting it to be, since my previous painting of Yavanna in a slightly different pose  showing a bit more nipple did and is now marked as hidden.  None the less, I'm going to make a concentrated effort to stop using Tumblr, at least in terms of making new content for it.  It's less just moral outrage at terms of service that suddenly changed, and more the using really bad automated software to flag images as inappropriate.  The attraction of it is as a platform for art, and that's severely impacted if you can paint a nice picture of mushrooms and find that's somehow classed as porn.

Also with luck I shall spend less time getting annoyed by other people, and more time making stuff and getting things Done.

The irony that I'm posting this on LJ which has a TOS I can't actually read has not escaped me, but hey, I still like LJ's image hosting.  It's easy and generous and they don't seem to run intrusive screening on it.  I'll import this over to Dreamwidth too which does feel rather 2007 by comparison, even though there seem to be people coming in there from Tumblr in droves, which is nice to see.  It would be great if the revival of use lasts!
In other news, Gothmog kitten got Rosie Roo to play with her today!  I was watching carefully, but Rosie was very gentle and playbowing nicely, and Gothmog didn't quite have the nerve to rush right up to her: she kept charging up, running out of nerve, doing a WITCH'S CAT stance on her toes and then running away.  I'm really pleased: I think Rosie will like to have a cat friend, if only Gothmog doesn't get too rough with her!  (I know that sounds ridiculous when Rosie is 23 kilos and Gothmog is about 2, but honestly, Rosie is the dog that got rushed by a horde of guineapigs a few days ago*.  She is not Robust.  I must try to get a photo, though photographing anything that's moving indoors at this time of year isn't easy.

It probably helped that it POURED with rain today, and Rosie walked about 100 feet up the road, wrapped up in her waterproof coat, then decided that was Enough and towed me firmly back home.

Still no sign of Fankil, other than a pair of worried eyes and cat food vanishing. Gothmog is currently sitting next to me on the sofa though, cuddling and purring.

* 1 guineapig was EXCITING.  She stared and trembled.  3 guineapigs was almost too much excitement!   She yipped!   but then suddenly about 30 guineapigs came swarming out of their hutches and over to the wire squeaking madly and hoping we had brought cabbage, and it was clear Rosie felt this was Far Too Many, poor munchkin. :-D
Tags: arty stuff, cats, dogs, tolkien
Subscribe