Finrod and Nerdanel : An unclothed gentleman in some distress encounters his aunt.

This was a tough idea to paint, because of the problem of trying to show alarm and trauma through stance and expression on a face smaller than a thumb, and I'm not sure I really made it work, but I gave it a brave try and probably learned some things.  I think I could have done this better on a large canvas, but I'm not sure I really want a picture of a full-frontal naked elf on a large canvas.  It's not the kind of thing you can just hang anywhere.

This scene is from my story: The Eldar That Were Faithful and I'm going to put the scene as a snippet underneath the painting. 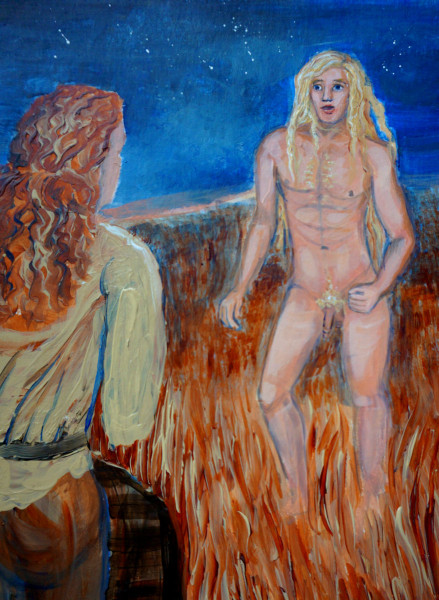 Nerdanel was coming back towards Tirion, late in the day, driving the four heavy draft-horses that she had borrowed from a farmer who owed her for a set of knives. The horses were pleased to be without a load to pull, and pleased to be heading home too. They picked up their great hooves and tossed their long manes cheerfully as they headed east with the sunset behind them.

There was someone crossing the plain in front of her on foot, only a faint shadow against the long grass dyed red by the evening light at first but clearer as she approached. Golden hair. One of the Vanyar, probably.

The red light shone on the outlines of his body. Was he naked? Nerdanel squinted in the failing light, surprised. In the years of the Trees, the Vanyar had not always chosen to be clothed, but nowadays they usually wore at least a skirt, particularly if they were travelling towards Tirion where the shadow of the Pelóri and the sea-winds made the land cooler. He had no spear with him, either. How odd. Decorative, undeniably. But still odd.

“Do you want a lift?” she called, as the horses brought the light wagon up within earshot, and he whirled and stared at her, hands spread, almost as if he was expecting attack.

“Findaráto?” she said, almost without believing it herself. But it was. Hair like Indis, Eärwen’s eyes, shoulders oddly reminiscent of Fëanáro, and the fine sharp features of the House of Finwë. Unmistakably, Findaráto. He stared at her for a moment longer, poised like like a frightened deer startled by a hound, the shape of his body moving from alarm into readiness to charge, every muscle tense. Then he blinked.

“Aunt Nerdanel?” he said. She reined in the horses, called to them to stand and jumped down from the wagon.

“Findaráto! We heard that you had died! What in all the spheres of Arda are you doing here ?”

“I did,” he said. “I died. They killed me. It was dark, it was so dark, Nerdanel. Darkness like a living thing. Or an unliving one… I never thought it could be so dark. And there were chains… and then there were the teeth… But then there was Lúthien, and singing, and then Námo asked me if I wanted to go home. And I said I did.”

“Well!” Nerdanel said, dumbfounded. Usually those slain who went to the Halls of Mandos returned to life only long afterwards. She had met one or two of the people who had died in the distant dark of the Journey and who had returned, but she was sure that none of the Noldor slain in the war had returned. Nobody had expected them to.

She looked at her nephew again in the last red light of sunset and realised that as well as being naked, he was also barefoot, and there was something not quite right about the way he stood, too, something oddly unfocussed and very un-Findaráto-like. Well, she would leave the philosophical puzzles to others. “Findaráto, did Námo not give you any clothes?”

Findaráto looked down at himself as if nakedness had not occurred to him. “No,” he said. “He gave me a new body. I suppose he thought that was the important thing.”

“Good grief!” Nerdanel exclaimed. She climbed back into the wagon and fetched the coat that she had brought with her in case the evening was cool. It was a little short for Findaráto, but she was broad enough in the shoulders that it would fit him well enough otherwise. “Put that on and get up onto the wagon,” she told him. “There are blankets as well if you want them, though they are probably a little dusty. I was using them as cushioning for some stonework.”

“Oh,” Findaráto said, pulling the coat around him. He climbed up to sit next to her in the front of the wagon. “What are you working on?” he asked, and he looked a little brighter and more present as he asked it.

“I’ve been making sculptures for the Valar,” Nerdanel told him, rummaging in a basket, “Only sandstone figures, mind, nothing like that lovely ornate jade and onyx stuff you used to do, but it’s nice and quick to work, and I wanted to make a good number of large pieces in a hurry…. The Valar didn’t ask for them, and I suspect they don’t like them very much, but if they will not listen to me when I ask that they go to war against the Enemy, then I have decided I shall bring them a few reminders. Children, crying for help, that sort of thing. Though I find it hard to make images of the Secondborn. I don’t really know what they look like, but I feel they should be included, somehow, so I have done my best. Do you want a sandwich? I have ham. And here are some apples. They’re from my garden in Tirion.”

“Food!” Findaráto said as if that was another thing he had forgotten. “Yes please. A ham sandwich and an apple, grown in Tirion! That is just exactly what I want.”