In which we simply walk into Mordor

Previously...
So, after the Council of Celeborn, we set off to Mordor to find out if anything was going on there.  Erestor, who had been at the council as Elrond's representative, came with us to see the Tower Kings. That's him in the brown robes next to the very spotty horse.

The Tower Kings are local kings who were given impressive Numenorean towers along the borders of Mordor, to live in after the War of the Elves with Sauron, by Ciryatur.  This was so they could keep an eye on Mordor in cause Sauron came back to visit his own Tower, Barad Dur.

In the great tower of Amon Nimras, we met King Ciryag and Queen Hedren, who were terribly impressed with Erestor and his aristocratic Numenorean connections.  We also met Nargu, an envoy from the Stonefeet Dwarves, who buy grain from the farms of Mordor, and Ramsay, a merchant from Far Harad.

All the news seemed pretty positive.  The Tower Kings and the people of Mordor are enjoying peace, happiness and prosperity. Since they aren't affected by the terrible White Blight that is affecting Ib-Narad, Chey and other Eastern states, Mordor is prospering by exporting grain to these areas.  There's a certain tension locally between the pro-Numenorean and anti-Numenorean factions, but everyone in the area is agreed that Sauron was a Jolly Bad Thing and that it's a good thing he's a strictly historical figure.  Men have terrifyingly short and optimistic memories!     We were somewhat concerned by this, and gave the Tower Kings a brief talk about the very recent Sauronic activity that we had discovered on our previous adventures, so they would know what to look out for.

This seems as good a moment as any to show off

chainmailmaiden's  Chocolate Sconedolin (it was a perfect ring of mountains in the manner of Gondolin, requiring only a scone...  There was a similar mountain-wall of pistachio cake too. Mmmmm. 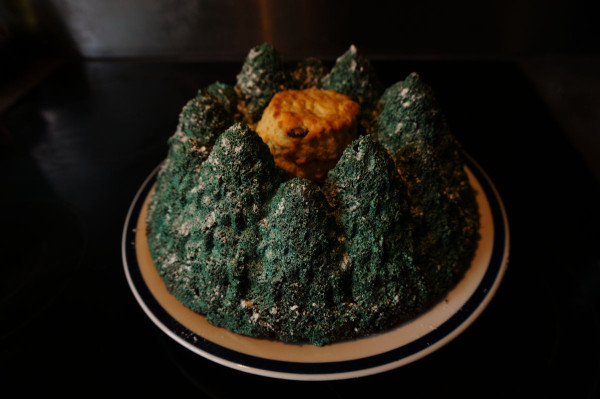 We went on to Núrn, the breadbasket land of Mordor set around the Sea of Núrnen, and on the road we met Shem and Shayla, traders from Núrn returning from the eastern land of Shay (confusingly not Chey, which sounds near-identical).  Angruin is getting quite good at talking to mortals now, Hidek seemed to enjoy chatting with other Men, and in general things went swimmingly.  We visited their charming if rather rustic village, and generally wandered around meeting people and finding out about Rural Life in Mordor, which appeared hopeful and idyllic, and seemed to suggest that a joyful and peaceful life lay ahead, blissfully preserved from the White Blight that was troubling so many other lands.

We established Diplomatic Relations with Núrn, and announced that our mission to walk into Mordor and Check Things Out was achieved.  Erestor went back to visit the Tower Kings, and take this hopeful news back to Celeborn and Galadriel, while we went on North.

East of the Sea of Rhun, we came to the land of the Ebremmi,where we were welcomed to one of their two small mud-brick cities by Jabeb the Judge. 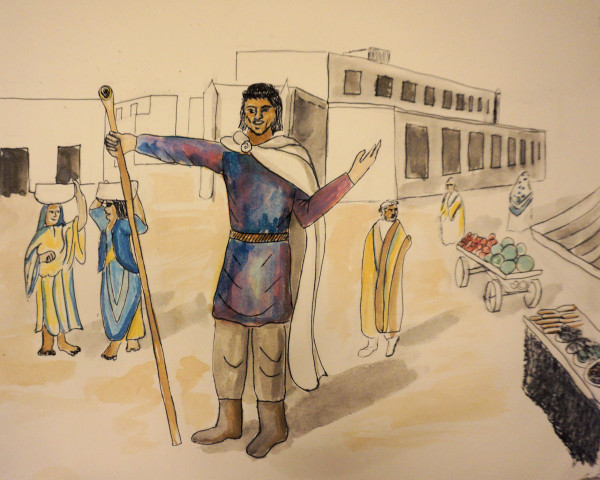 We had previously encountered Jabeb fifteen years ago, when he was a humble shepherd boy who impressed us by arguing a clever case to help a girl being forced into an unwelcome marriage by her father.   Since then, he had become the leader of his people despite his remarkably young age.  The Ebremmi had been attacked by Shay, a kingdom to the East of Mordor that owed allegiance to Sauron, who had killed many of the older men.  Jabeb led the resistance and once Shay was repulsed, had become Judge.

He sent us off to meet Bridi, the Miner of Ebremmi, who, it seemed, had discovered a great rarity : Mithril deposits outside of Khazad Dum or Numenor.  We inspected his mine, and Angruin and Finculin were able to use their mining expertise to confirm the find.  Thrandin gave Bridi a great deal of diplomatic advice and arranged an alliance with the Long-beards of Khazad Dum, who obviously have a professional interest in mithril...

Shortly after that, we ran into a strange little person, one Tinglin Redcap, a tiny shrill flautist, who demanded that we answer a riddle. Angruin did this successfully, much to the delight of Tinglin, who decided he was Angruin's new best friend. 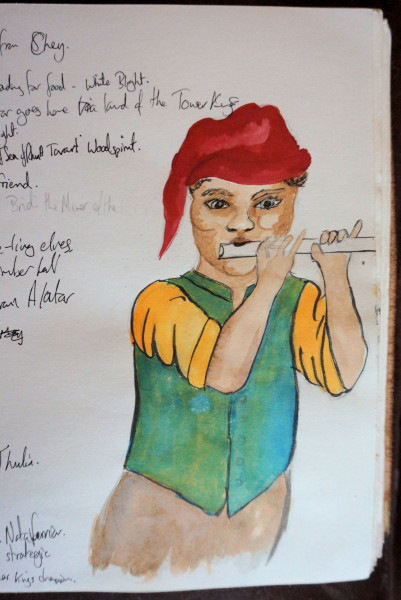 Everyone seemed to think that Angruin should be infuriated by this.  Angruin, however, has been doing a lot of travelling with all sorts of Elves and Men and has had to deal with a number of trying situations recently.  A shrill tiny flautist with a taste for riddles and no opinions on kinslaying, or silmarils, and no involvement with Sauron seems like a quite pleasant addition to the party.

We returned to Engirdor, the land now ruled by Sirithglor, to gather supplies.  It's a pleasant spot, full of tree-dwelling Elves, underground houses for Dwarves, and log cabins for the Men.  Hidek's timber hall was an impressive sight.

While we were relaxing in Engirdor, a Message arrived from Alatar the Blue Wizard.  The Stiffbeard Dwarves of the North were in danger!  They knew a great deal about Fankil, Demon of the North Wind, and Alatar suggested that we should go to their mountain-capital, Kibil-Tarag.

So we did.  The Stiff-beards are unusual dwarves in that they tend to live on top of mountains rather than digging deep tunnels into them, and also they have a great love of mountaineering.  We found this out on the way, since Thrandin had been visiting the Stiff-beards recently, and had learned the Ways of Mountaineering, and had even been invited to join the prestigious Mountain Club of Kibil-Tarag, so was able to bring us up to date.

In Kibil-Tarag, we met King Sudrin of the Stiff-beards, Slayer of the Cold-drake and Heir of Thulin, and also one Altjoffer Tenpeaks, a dear friend of our own Thrandin.  But otherwise, Kibil-tarag seemed surprisingly quiet and empty.  We learned that the Stiff-beards had been engaging in a long and difficult war with the Ice-orcs, and they were losing.  Poor King Sudrin was quite distraught.  But he had come up with a Cunning Plan to reverse the situation.

They had learned that an Ice-orc army was attacking the Men of Borr, a related kingdom to the South, and the Stiff-beard armies had gone out to lie in wait, hoping to strike a conclusive blow against the orcs.

"I have a bad feeling about this," Angruin said, and he was right.  It was a trap.

News came in that Kuldheim, a Stiffbeard settlement in the North, had fallen to the orcs, led by a great white demon! And the armies of Kibil-Tarag were several weeks march away.  We stared in alarm at the map, like this: 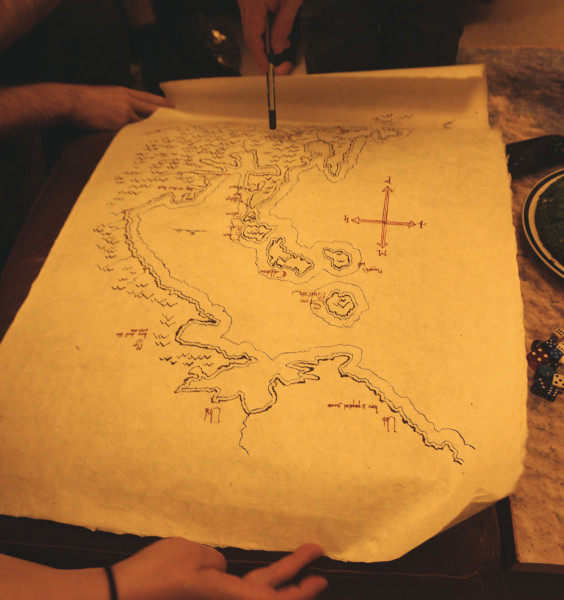 While all this was going on, the King's nephew Dufr, a rather unimpressive dwarf, kept playing the Serpent, the same tune over and over and over.
Eventually we worked out that he was trying to tell us that we should go to Bosvik, a fort that controls the road from Coldherm to Kibil-Tarag, and would be a good spot to try to hold the Ice-orcs at bay until the Stiffbeard armies could come to our aid.

When we worked this out, there was a universal cry of WHY DIDN'T HE JUST TELL US???

Apparently Dufr is very shy.  Here he is playing the Serpent. On the right, here some of us are having finally worked out his Cryptic Clue,  setting off to Bosvik, in the company of some heroic Dwarven Mountaineers, the King's personal guard, and his body-guard. 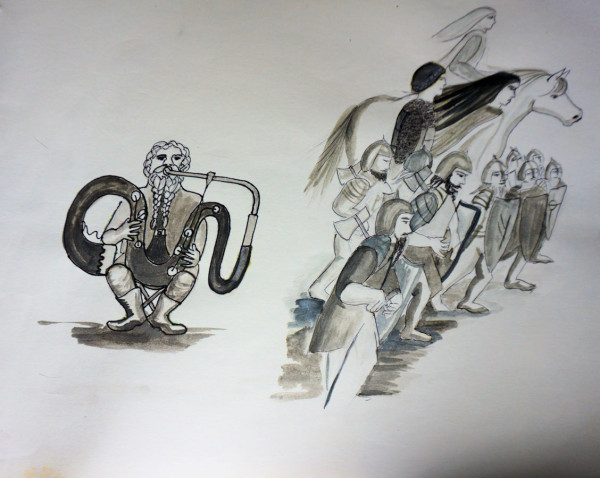