Adventuring in the Terrible North

Angruin (me) : a grumpy Fëanorian Noldor smith, born in Tirion in the Years of the Trees, now resident in Rivendell.  A particular expert in Ringcraft, with a passion for Really Disliking Sauron a Lot, since the Downfall of Eregion, and a certain expertise in kinslaying that we try not to talk about too much...

Finculin (Bacchus) A young Noldorin smith from Eregion, Celebrimbor's favorite apprentice.  We met him in our last adventure, happily living in a chamber inside a volcano where Sauron himself had sent him off to after Eregion's fall.  He was quite unaware of what had happened to Celebrimbor, and in fact, had been continuing to work with Sauron in a terrifyingly ill-advised attempt to make more Rings of Power.  We basically stole him along with the Ninth Ring, and carried him off to Rivendell where Elrond and Angruin did their best to convince him that Sauron is a Really Bad Thing, and I'm not entirely convinced we fully succeeded.  On the other hand,  it's rather nice for Angruin to be only the second-most-dodgy member of the party.

pwibethran) A Man of Urd who is blessed (or cursed) with the ability to turn into a giant ferocious bear.  Occasionally this happens by accident, which is always a little inconvenient, and he has to wear loose-fitting clothing and is rather good at emergency needlework.

king_pellinor) : A Sindarin lady from Doriath with a taste for diaphanous gowns, who had learned magics from Melian herself, sent to join our party by Galadriel.   I have to admit that she and Angruin got on like chalk and cheese to begin with but by now they have learned a sort of grudging respect for one another.  Sirithglor seems to have moved from being a loyal servant of Galadriel in the direction of being something of a rival, in that Sirithglor was supposed to be looking for possible kingdoms for Galadriel to rule, but instead set up one of her own.  Hm.
Thorofin (

chainmailmaiden) : A dashing young Noldor Elf, blessed with amazing weapons skills and equally amazing hair, but not particularly blessed with circumspection.  His particular interests are honour, glory and doing down Sauron, and fortunately for Angruin, although Thorofin's parents were from Gondolin, he seems to have got over the Unfortunate Kinslaying Incident at the Havens.
Thrandin son of Fundin (

ladyofastolat): A Very Important Old Dwarf from Khazad Dum.  Possibly the actual leader of the party, and almost certainly the most morally upright.  Chosen by Aule himself to carry out an important mission involving the Petty-dwarves, and also the holder of the Seal of Durin, which allows him to call on all the tribes of the Dwarves for help, if necessary.  His passion is for Elves and Dwarves working together, which is something Angruin greatly approves of.   Angruin and Finculin,  with their special Noldorin skills in shaping glass and working with light, have made a pair of spectacles for Thrandin, which has improved his accuracy in battle considerably.

ladyofastolat had in fact crafted the Seal with positively Dwarvish skill, and here it is: 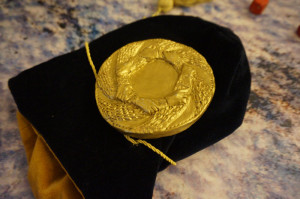 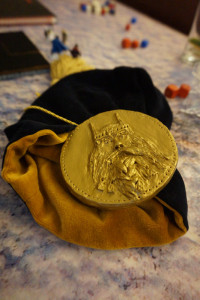 (it's actually made of air-dried clay, not gold.  But ! it looks like gold! )

We are better-equipped than we were last year, because there was a LOT of Sauron's loot stashed away under Mount Tinang with Finculin.  Including Angruin's own sword, and a suit of suitably gloomy-looking galvorn armour.  Sirithglor got new bracers to make her a bit less defenceless in battle, and Thorofin got some chainmail almost as shiny as his teeth NO!  I misremembered that. He got special Speedy Boots, special gloves and a special bat wing hood that allowed him to go unnoticed in any crowd, along with a pretty, but not special ring.  Thrandin got a new set of armour too, though it was made for Elves and we had to tailor it a bit to fit a Dwarf.  Finculin, who loves loot and has not yet learned that it's pretty ephemeral in the long run, wanted lots of stuff but I've forgotten the list now. However, he claims that we burned all the best things.  Whether this is true depends on whether you define 'best' as 'a bit dangerous and Sauronic'.
So, we convened after 15 years at Edhellond, at the Council of Celeborn, convened to discuss our findings and work out what to do with the Ninth Ring.  There were a lot of VIPs there apart from us and I ran out of energy drawing everyone, but here from left to right are Hidek, Thorofin, Glorfindel, Celeborn, Galadriel, Thrandin and Sirithglor. 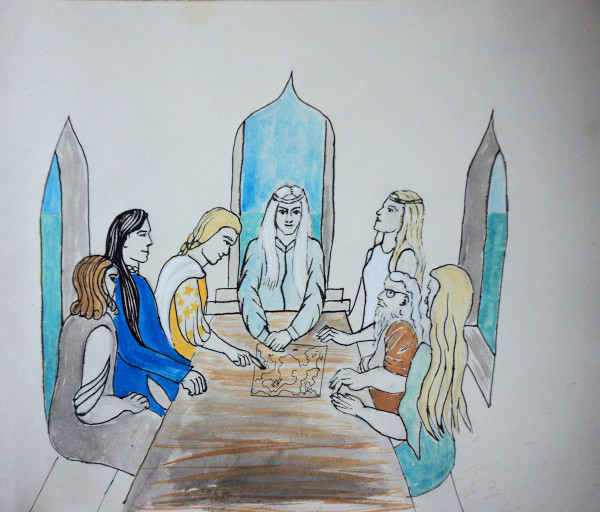 I didn't get Finculin or Angruin on there, so I drew them separately, rather terrible portraits.  I keep forgetting that Finculin has red hair so it ended up rather dark, and I hadn't got my head around how to colour faces either, so Angruin looks as though he's got mud on his face. 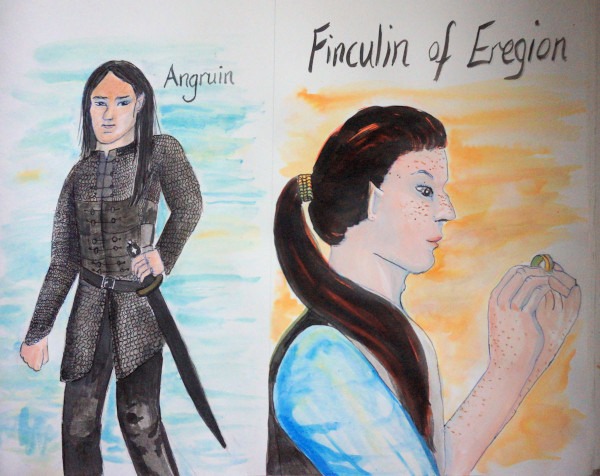 At the Council, it was decided that there was an urgent threat to the stability of much of Middle-earth from a White Blight disease, which was spreading famine across the land and whose arrival coincided with a cold North Wind.  Much discussion of trade and grain supplies.  At present, it seems the prosperous fields of Mordor around the Sea of Nurnen are supplying a lot of the countries round-about.  This might not be suspicious, since Mordor was liberated by the Numenoreans and we're fairly sure Sauron isn't there, but it can't hurt to check.

We had encountered Fankil, Demon of the North Wind and Servant of Morgoth,  on a previous adventure, and still had sorting him out on our to-do list.  Coincidentally, we also knew that the Nine Rings, unlike the One, had to be destroyed using not great heat, but terrible cold, and if there is one person who really is both terrible and cold, it's Fankil.

So, we decided to go and sort out Fankil, taking the Ninth Ring with us, and on the way, we'd pop into Mordor (ship up the river, then walking)  and just check nothing iffy was going on there.  Fortunately, we happened to have an enchanted ship that we had retrieved from Sauron's stash of treasure, that could expand to carry us all, and contract to fit in a backpack.  We suspect Sauron looted it from Finrod's tower when he captured that back in the First Age.   Here we are, all on board: 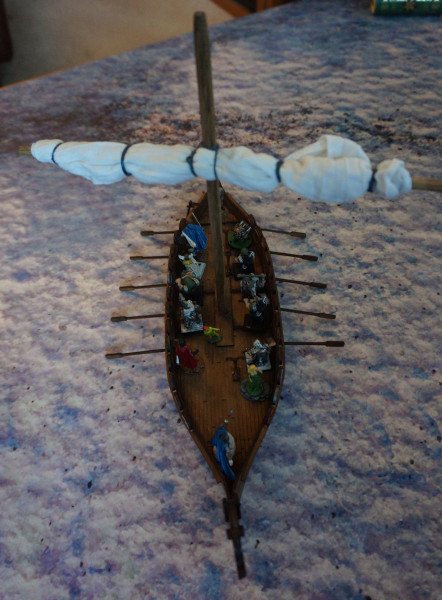 And here we are getting off and onto our horses : 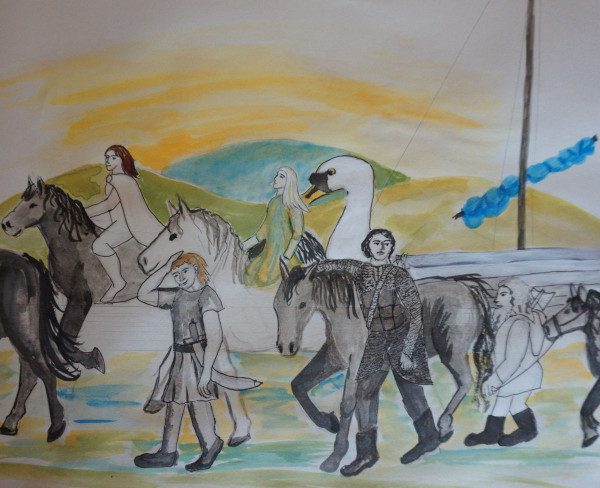 That's Finculin with the red hair (yay!) on the horse on the left, and Hidek rubbing his head.  Sirithglor is riding with her knees folded up in a dress.  Angruin has his arm over his horse's neck, but I fear that horse is going to meet the fate of all Angruin's horses.   That's why he always names them 'Firya' : Mortal.  He's a gloomy bugger.   Thrandin the Diplomatic Dwarf is at the back leading a pony.

And now I'm tired and there seem to be a lot more inkpaintings than I somehow thought there were, so I shall do the rest tomorrow.


Next: In which we simply walk into Mordor.

In other news, I think I’ve decided to let myself not complete Inktober this year.  I did 21 Inktober drawings, and they were definitely getting more scratty and rushed as they went on. With all the roleplaying pictures as well, I’m feeling a bit maxed out on ink for now.  I think I'll take a break for a few days.  I think I did learn some things doing it though!
Tags: arty stuff, ink, noldor, roleplaying, tolkien
Subscribe