But I seem to lack news and opinions at the moment so this is what is left.

This was the last week of mark-making in art class: next week we are on to Shadows.   I decided that since I have gold and bronze paint I almost never use, and a big pot of iridescent medium, I would try creating an image that used these reflective surfaces.  Of course, these are hard to photograph, so the effect comes over even less effectively than usual, but hey, here they are.

So, the sky here was painted first with iridescent medium, and then overpainted with windsor blue and I spattered it with water to make a star effect. So if you move around it, you can see the iridescence shining through underneath the blue. Sadly, you can't though, because this is a photo. :-(

Then the distant hills are cobalt blue, and below that is a dark bronze that shines, and the bottom is gold marked with swirls made with a scratchy wire pad.  I left the space under the gentleman in the corner blank then overpainted him at the end, but I should have put him closer to the middle if he was going to be the subject of the painting: he's too far to the right.  So, Colin The Art made me add a subject to explain the story of the painting, and I went for a dragon because after my mis-spent youth, I can draw a quick dragon much more easily than a quick human.  Obviously the camera has darkened the dragon and lost half the detail, gah. 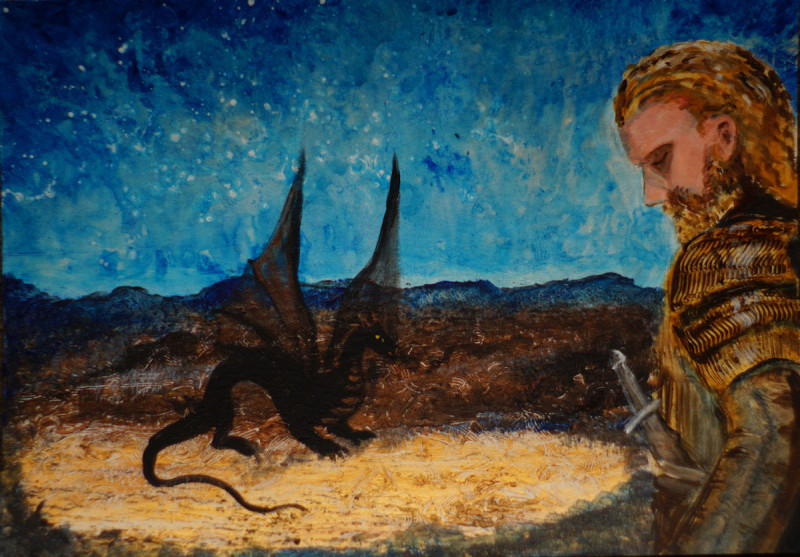 And here is a horse I made as a card for my sister's birthday, again with a gold-bronze background marked with scratched lines. (I don't know how you photograph shiny gold things.) 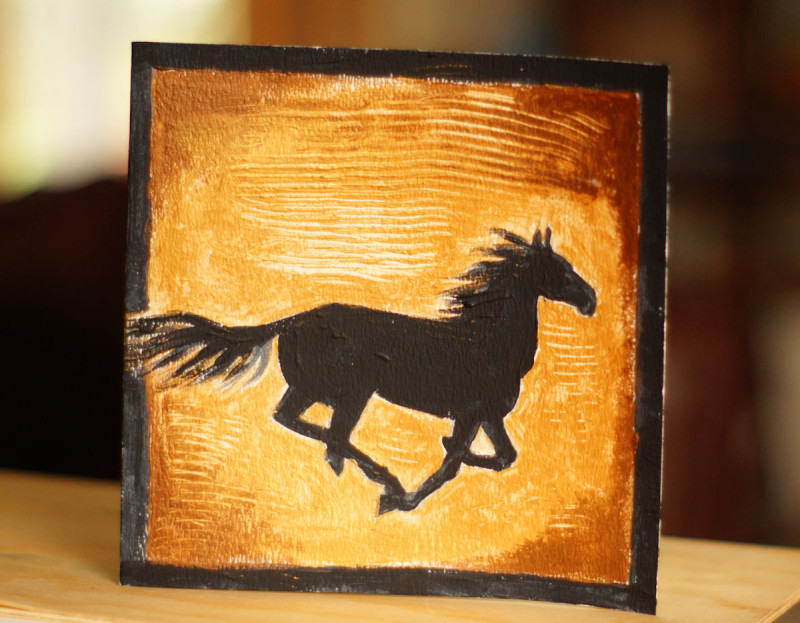 I also tried painting a night scene with a moon, using luminous paint, but was rather disappointed to discover that my pot of Briandegg luminous paint doesn't really shine very brightly,  even if you put it on really thickly, and you need complete darkness to see it at all, which obviously makes it rather hard to photograph.  Oh well. I live and learn.

And here are a couple of things I wrote:
The Statute of Finwë and Míriel : I was astounded that so many people wanted to read a short story about an elderly Bilbo and Elrond sedately discussing the translation of a bit of lore so obscure it doesn't even appear in the published Silmarillion, but apparently they did. I suppose Bilbo is a popular character.

Here All Weariness Can Find Rest which is a brief thing about Fëanor in Valinor, in which he explains to Ambarussa why their family is different.