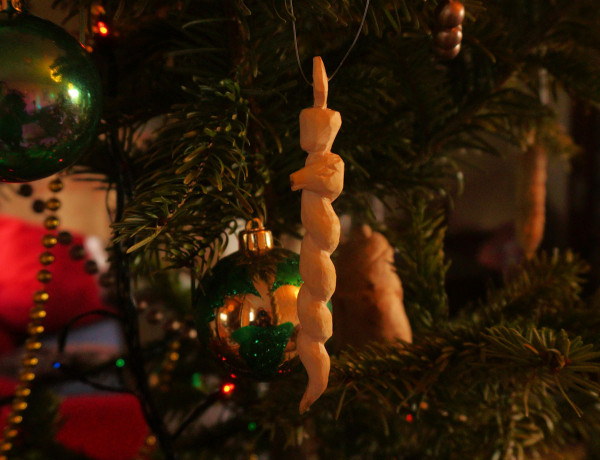 This Christmas tree turns out to have quite dense, tough wood, and I was quite glad I'd chosen only a thin piece to carve.  I didn't have any great ideas about what to carve, so I just chopped bits off and found after a while that I had made a twirly snake.  Then it looked like there was a sort of blob left on the top, and Pp suggested I make it into an apple and make it Garden of Eden themed, so that's what I tried to do.  The bit sticking up is more or less apple-tree-leaf shaped.   So, now next year I definitely only have one carving to make, not two.  I wonder if I'll remember that in Dec 2018.

And a written thing: I was trying to write Quenta Narquelion as a story entirely from Ghost Feanor’s point of view but it turns out that the downside to a single POV is that you don’t get to answer questions about when other people work things out?  Who knew?  This writing thing is so complicated.  POV switching is the way to go, honestly, writing just one POV starts to feel like being stuck inside a box after a while.

Anyway, someone asked about when it was that Maedhros worked out that he was being followed by Ghost Feanor wandering around Beleriand like a creepy ghost stalker, and I started replying and then I had to go away and make a stew and when I got back I’d mostly written this in my head, so here it is: As One Who Returns From The Dead