I bought this year's Christmas tree from Bohetherick Farm: I think it's a Nordmann fir: a very nice compact tree with a good shape to the trunk.  I had to squelch through the mud to find it and Rosie had to endure an excessively friendly springer spaniel.  It's almost exactly the right height without having to chop any bits off too, though that does mean that I don't have a chunk of the trunk to carve with.   I've sort of lost track of the number of carvings made from previous trees now, but there are quite a lot of them.   I have taken a lower branch off to make the 2017 carving, but haven't started work on it yet. 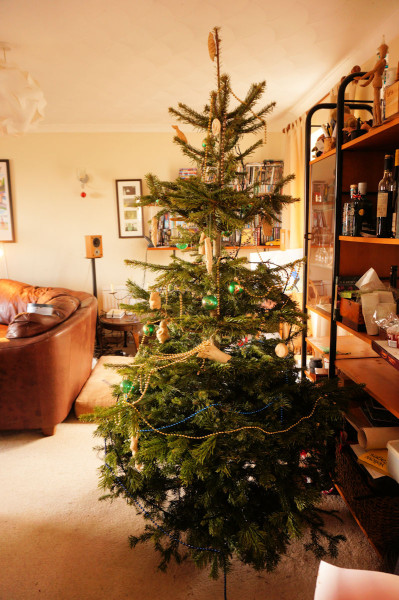 The 2016 carving was a tiny canoe: not one of my better efforts, I fear: I started it back in December, then I left it and discovered it again only a few weeks ago, by which time it had dried out and was not easy to finish.   Ah well.   I'll try to make an effort to get 2017's carving started and finished before the year is out! (I'd better get my skates on then....) 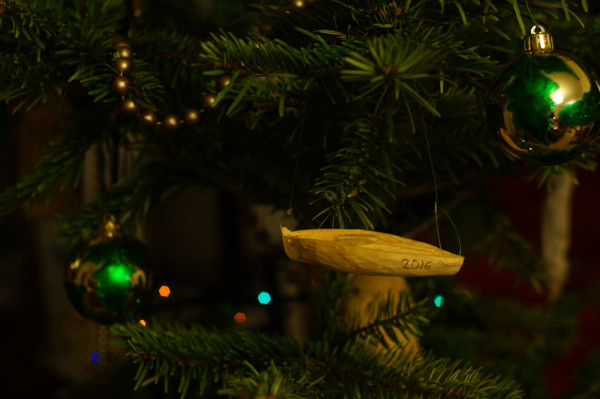 We invited the parents to lunch at our house this year:  I feel rather lucky that all three of them are once again well enough to make it over here.  My mother stayed over so she didn't have to drive home in the dark, which was nice.   The weather has been awful : gloomy and wet, so I didn't give Rosie an afternoon walk, but instead we played one of the many games from Pp's shop, Ticket To Ride.  It was fun, and I WOULD have won if I'd only had one more black coaltruck!  As it was, Pp won.  Boo. We discovered, playing this, that my mother's colour vision has become terrible: she had great difficulty telling green from grey or orange from red. 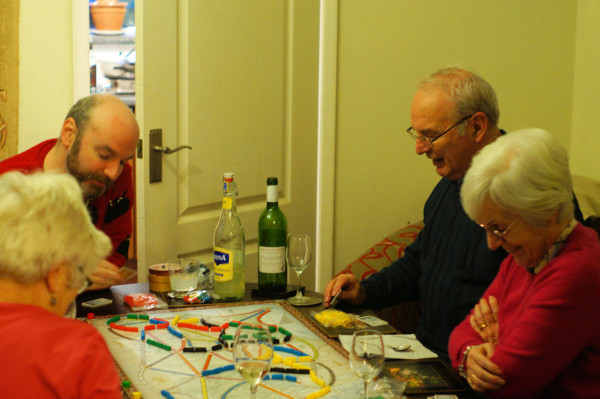 Pp has been terribly busy this year with his Shop on the Borderlands.  This is the backlog of Things waiting to be entered into his shop.   People are buying lots of the Things too.  He has gone off with (I think) 12 parcels to the post office just now, having spent several hours wrapping them. 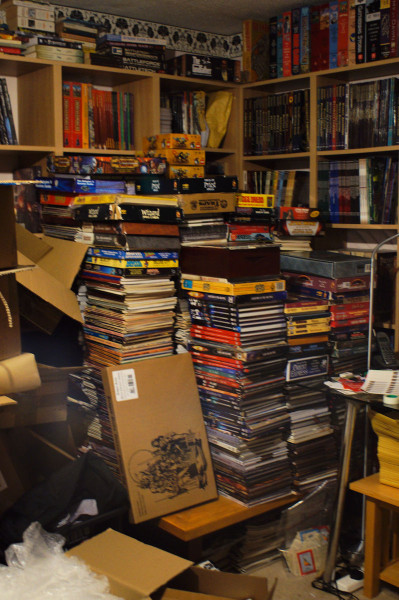 Rosie is doing well as an only dog though I still miss Brythen.  It must be said though, that Rosie on her own is a very easy dog.  She doesn't like walking in the wet, but if it is wet, she'll quite happily stay indoors without becoming overactive or tearing things to shreds! She just sleeps.  Her ability to sleep is amazing!   I must admit, although I've been very tempted to get another dog, Rosie is SO easy to live with on her own, I've sort of been putting it off.  If a male whippet puppy comes up in rescue, that might convince me to make the effort again though...  Or perhaps it's just not quite the time again yet.

The only thing she's a little awkward about is wearing her harness: she'd prefer to be walked on a collar, but given my experiences with Az and dogs with long elegant necks on a collar, I really prefer her to wear a harness so she can't knacker her neck or back, which obviously is a concept she can't really understand...   Here she is evading me and refusing to have her harness put on like a Bad Doggy : 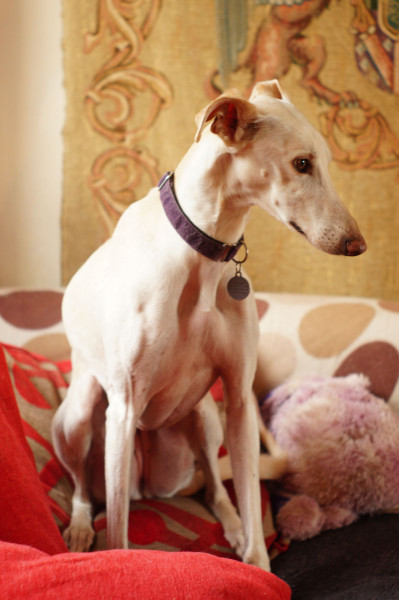 She DOES want a walk, but she is also quite willing to run away and hide (unconvincingly!) on the sofa in the hope that somehow this will avert the Harness Moment (once it's on, she ignores it).

I wish I'd taken my camera on our walk today, because after the first few minutes when it HAILED LIKE MAD and we fled back to the car in horror (her idea, she towed me!) and I thought we might have to go home, it was actually quite pleasant with lots of sunbeams shining through the raindrops.  I adopted the strategy of spotting a patch of blue sky on the horizon, driving towards it until we got to a sunny bit, and then stopping.  That doesn't seem like it should work, since clouds move about a lot, but it did, and we had a nice quiet sunny walk in the woods in the end.

Here we are having just got back as it began to rain yet again.  The fire is on, it's just not warmed up yet enough to show in the photo.   Yama Bungle has taken over the second dog bed, although there's room for about six of him in there, since it's Brythen sized. 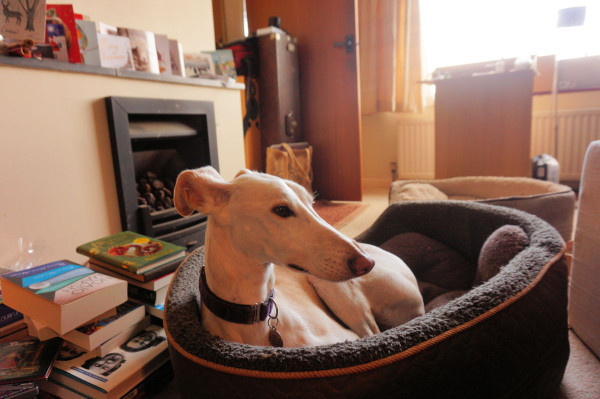 What else has happened?  Oh yes, we went to see The Last Jedi, and it was surprisingly good.  I wasn't expecting much to be honest, but it had a lot of plot and felt like it was properly part of the original movie series somehow.
A rather belated Merry Christmas and I hope you all have a Happy New Year!
Tags: carving, christmas, dogs, lurchers
Subscribe