Mystery mine of (last) week. Or possibly just a very large hole.

Now, I thought this was just another mine when I came across it the other day near West Down on the river Tavy.   It looks like an adit to me, though it seemed a bit odd that there was no fencing and no grill to stop unwary tourists wandering into it.  (It's quite big enough to get inside, Pp almost did, as he was wearing wellies & it was a wet day he ventured in to take the photos.) 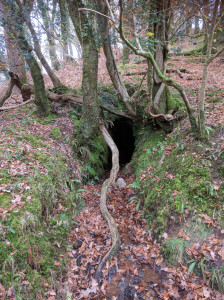 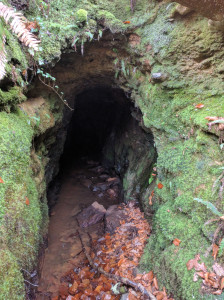 But I just looked it up on the Heritage Gateway*, and there's no mine or adit marked there.

There are a few mines a short distance away:   Wheal Bedford, a nineteenth-century coppermine,  Tavy Consols, across the river, the Lady Bertha Mine, Walkham United mine, and the closest, the excellently named 'Virtuous Lady Mine'  apparently named in honour of Elizabeth I, which was worked from 1588 to 1807.  It reopened in the 1830s before finally closing in the 1870s, and was apparently 'once famed for the siderite crystals with curved faces.'  I'm not sure what that means, but it sounds brilliant.

So, possibly this is one of the undocumented adits, or possibly it's not an adit at all but some other... thing.

*I'm a bit worried about Heritage Gateway.  They have so much brilliant data in there, and it must have been a huge faff to assemble, but the interface is looking very aged now, the maps are still in beta and don't work with https... I do hope it won't just fall off the web one day, that would be a great waste of so much carefully-compiled information.