The Conquest of Mount Tinang

We continued through the winding mine-tunnels from Mount Maal towards Mount Tinang, home of Ren the Unclean, and possibly home of worse things too.  Mount Tinang was not the most pleasant of places.  It was hot and damp and smelly.

Since we had a map, we headed first for the Halls of the Sorcerer.    There we found a giant orc (he didnt' last long), and later a sorcerer, but not the one we were looking for.   The sorcerer was a Man, one Govovod of Southern Chay, and after we had subdued him, we found that the room he was in was a library.  (Fortunately for the books, there was some sort of preservation spell on the room so despite the general dampness they were not mouldy.) 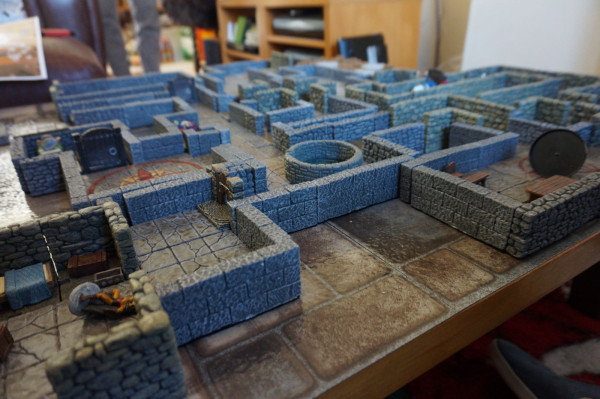 They found a mighty swordswoman, who took some beating.  She was one of Ren the Unclean's bodyguards, a member of the Camel-folk who migrate across the northern edges of the Great Harad desert.   Then they found Gul the Cultist, a man with a great big club.   They slew him too, then Ecthelion used his body rather cunningly to defuse a trap.

The books in the library were  familiar.  Some were from Valinor, and it seemed likely they had come with Finrod's people across the Ice.  Others though were newer. In fact, one of them was by Angruin.  A lot of the books had quite definitely been looted from the lost libraries of Eregion.  They were about ring-making.

Thrandin interrogated the prisoner while we looked at the books.  It appeared that he was apprenticed to Finculin of Eregion, a young Noldor smith who had been one of the Gwaith-i-Mirdain in Eregion,  Celebrimbor's protégé, and of course, a friend of Angruin's.

Finculin was making rings again. For Sauron.   Sauron who had tortured Celebrimbor to death and hung his body up as a banner.

Angruin very nearly exploded at this point. There was shouting.  Probably he would have charged straight off to the forge, to find Finculin without even waiting for the others, if Thrandin had not talked very fast. 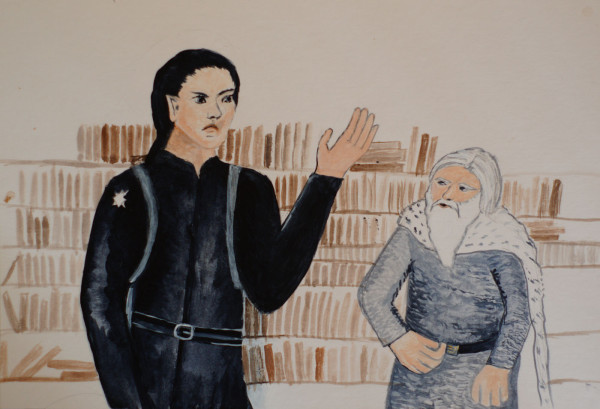 I decided that tragic though it was, we could not risk all these ring-making books staying in the wrong hands, or falling into other bad ones.  The only option was to torch them.  So we had a book-burning party in the library.  (We only burned the Eregion books.  I think Thingolodh took some of the Valinorean ones)

At this point the rest of the party returned, and we explained to them that a member of the Gwaith-i-Mirdain was forging rings of power for Sauron in this very mountain.  Either he was being forced to do it, in which case he urgently needed to be rescued, or he was doing it deliberately and by choice, in which case he urgently needed a punch in the face.

The rest of the party explained to us that they had found a really cool door that they wanted to open, and would listen to our arguments later.  Also that Thingolodh and Thorofin would quite like to kill the prisoner, who had surrendered, just in case he unsurrendered again.

If it had not been that Angruin felt guilty about Thorofin and the whole Havens of Sirion thing he would have gone storming off on his own at this point, but he really didn't want Thorofin to end up becoming a merciless random killer, or even Thingolodh who had after all survived thousands of years without doing anything that morally reprehensible.  Angruin felt the whole 'let's kill the awkward prisoner' suggestion  was heading deep into 'let him not vow to walk in the dark, who has not seen the nightfall.' territory.

Irimon the prince and Ecthelion in his shiny white boots, thankfully, also felt that slaughtering prisoners was Not On.  Thank heavens for Numenoreans with ideals.  There was a tense stand-off, which was eventually resolved by everyone remembering the really cool door that hadn't been opened yet, and going off to open it.

We opened the door, and went in: 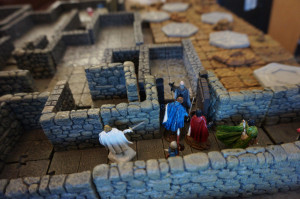 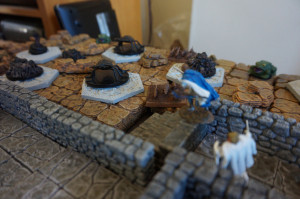 It turned out that the room was full of spiders, frogs, and bugs.  Some of the spiders were large, some were small.

Poor Prince Irimon got absolutely covered in tiny children of Ungoliant, and it turned out that if there is one thing that Irimon really cannot stand, it's spiders.  Much to Ecthelion's distress (he's very loyal to Irimon, idealises him a bit, I think) Irimon panicked and ran into a corner.   Angruin had to go after him and brush spiders off and be reassuring, while the others killed the spiders, frogs and giant beetles that came charging out.   Thorofin killed a number of them while flicking his hair about dramatically.  If it had been anyone else, they would have ended up with cobwebs in their hair, but Thorofin's hair seems to be immune from that sort of embarrassment.

I can't say that Angruin is naturally gifted in reassuring people, but he did at least try to look after Irimon. Possibly because Irimon does look very like Elrond.  But I think Irimon felt more reassured once Ecthelion stopped killing beetles and came and brushed spiders off too.

We headed back to the hallway, where a sudden cloud of paralysing gas hit us.  It was one that was specially dangerous to Elves and Men.  Everyone was stunned, except the Dwarves, who were resistant and by a very unlikely diceroll, Angruin (Out of game,  I didn't believe I'd done it and had to recount.  I rolled 5 d6 and got a 7 across the lot of them: I rolled three ones!)   Anyway, the others were paralysed by a cloud of gas, leaving the dwarves and me to face... 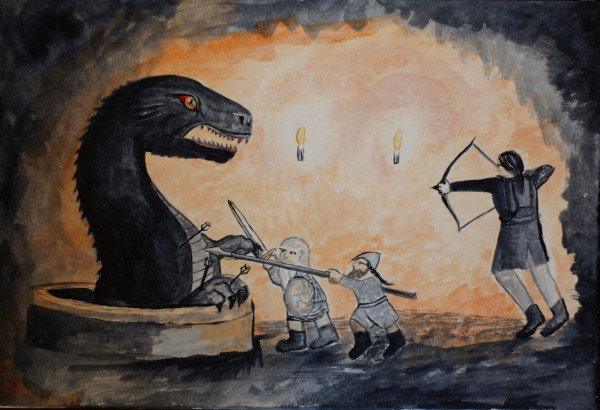 ... a cold-drake!
It popped up out of the well, and went for us.  This was Thrar's moment.   Thrar had been brought up on stories of Azaghal and Glaurung at the Nirnaeth Arnoediad, and had spread tales of dwarvish valor against dragons all across Middle-earth.  He was carrying the Spear of Azaghal.  There was absolutely no way that Thrar was not going to slay this dragon, or die in the attempt.  He leapt into the well on top of the dragon, and would have fallen if Thrandin had not heroically managed to grab him.

I peppered the dragon with arrows, Thrandin hit it with the mighty sword that Aule had given him, and Thrar drove in the Spear of Azaghal and clung on wildly.   It was not an easy fight, though it would have been even more difficult if the dragon had concentrated on actually fighting, and hadn't kept stopping to taunt us.

One of the taunts it delivered was about Irimon and the River King's daughter.  I wonder how it knew about that.

Thrar leaped back onto the dragon, and speared it again.  The dragon roared and disappeared down the well.  Thrar went with it, striking at it all the way! By the time it hit the bottom, it was dead.  Thrar had a badly broken leg and a broken ankle on the other leg too, but he was alive and enormously triumphant.

We hauled him out of the well with a rope, set his legs, and popped him in the library to look after the prisoner, while we went off to the forge!
Tags: acrylics, arty stuff, holidays, noldor, roleplaying, tolkien
Subscribe