On the trail of River Kings, Rings and Things

Previously on...  we went on holiday to Second Age Middle-earth.  Last week was the third of our weeks of adventure in Middle Earth.

Dramatis Personae for this week:

Angruin (me) : a grumpy Fëanorian Noldor smith, born in Tirion in the Years of the Trees, now resident in Rivendell, via Himring, Eregion and Khazad Dum. (Let us not mention Doriath, or the Havens of Sirion).

Ecthelion : An idealistic young Numenorean Knight of the Moon, from the Numenorean colony of Ciryatanore. Has an amazing ability to go adventuring entirely dressed in white without getting muddy that is almost more impressive than his swordplay.

Thingolodh : An elderly Teleri Elf, a friend of Cirdan, with a beard, no belly button and a cavalier approach to underpants.  Likes to swim.  Basically way too old to have any fucks left to give about almost anything, including kinslaying, fortunately for Angruin.

Thorofin : A rather gorgeous young Noldor Elf, blessed with amazing weapons skills and equally amazing hair, but not particularly blessed with circumspection.  His family were from Gondolin originally, I think.

Thrár, son of Thangrin: A cheery young Dwarf from Belegost, determined to bring the story of Azaghal the Dragonslayer to a wider audience and force the world to fully appreciate the impressive heritage of his now rather less impressive dwarf-city.

Thrandin son of Fundin : A Very Important Old Dwarf from Khazad Dum.  Possibly the actual leader of the party, at least in the opinion of the Dwarves and Angruin.

We had been sent by Gil-galad and Elrond into the distant East, to look for Sauron, who had gone unaccountably missing, and might be up to anything. Well, that was the original mission, anyway, but on the way, our Doriath Sindarin lady Sirithglor had gone and set up her own country, Engirdor, and so we'd left her behind for a bit, and picked up Ecthelion instead. Ecthelion was searching for the River King's Daughter, on behalf of his lord Irimon, the younger brother of the king of Numenor.

Although the rest of us felt that princes should really have better processes for selecting their wives than 'woman seen in dream' we were going towards Ralia anyway, so we took Ecthelion with us and set off across the endless, endless plains of Alcar yet again.  It does feel like we've crossed the plains of Alcar rather a lot, by now. Routefinding not a strength.

We met a man called Tibu, with a yurt and a very attractive yak with tassles.  We saw the sun rise and fall over the vast plains, and marvelled as the short swift Spring of Alcar covered the plains right to the horizon in small pink flowers.   We heard stories of Bakalgu the Destroyer, a human sorcerer, and found a horse skeleton with the skull replaced by a human one.

To our great surprise, somewhere on the Plains of Alcar, we encountered Thrar, who had been off last year visiting the Iron Kingdom of the Ironfist Dwarves.  The news of them was ominous.   The Ironfists had provoked a rebellion among their Mannish neighbours by taxing them over-heavily.   Thrar had at least been able to negotiate a surrender by the Men, rather than the massacre you might expect if heavily-armed Dwarves had gone in to battle with Men. But the leaders of the rebellion, Sul and Ivat, who had been free gladiators, had been given to the Ambassador of Ib-narad as slaves.

Further, Motsognir, king of the Ironfist dwarves had been seen wearing a new ring.   There are six of the Seven we made in Eregion missing, and almost certainly in possession of Sauron.  We had warned Motsognir about this, I think, so it's annoying if he's gone and accepted a Ring anyway.  I expect better sense from Dwarves.

One good thing Thrar told us is that he had been involved in a battle with the Ice-orcs, and had saved the life of the son of the King of the Stiffbeard Dwarves.  No doubt the Stillbeards now have a greatly improved understanding of the importance of Belegost, and are all singing songs in praise of Azaghal and his dragon-slaying prowess.

Anyway, at long last we had got across the Plains of Alcar and reached the highest mountains of Middle-earth, the Mountains of Dawn.   There we encountered a strange herd of peculiar beasts, known locally as dragonkine.  We theorised that these gentle herbivores may have been the original stock that Morgoth twisted into his terrible Great Dragons.   They were odd-looking things.  I took a picture. 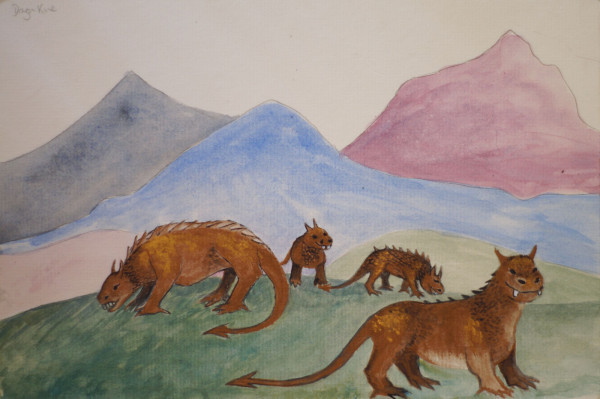 Soon after spotting the Dragonkine, a thick white mist fell upon us.  Strange sounds came out of it, and shortly afterwards, an alarming sight: an attack Mastodon, escorted by orcs!   Thorofin (in blue), Ecthelion (in white) and Thrar (with the Spear of Azaghal in hand) waded in.   I assisted by setting the Mastodon on fire, and Thingolodh, not to be outdone, used a Word of Command to tell it to GO AWAY. 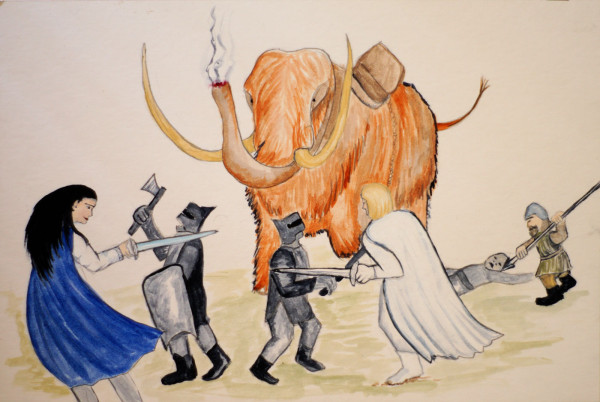 I think it is safe to say that the attackers soon regretted their life choices.

After that, we came across a pair of trolls, attempting, not very successfully, to hunt goats.  We saved the goat, which bleated its eternal thanks to us, but some party members (Thorofin) were a little disappointed by the inelegance of the way the trolls were slain.  Angruin looks down his nose at this.  After Alqualonde, most of the battles of Beleriand and the War of Wrath, not to mention the fall of Eregion, Angruin is very clear that the important thing in a battle is that the other guy dies, not you.  This was achieved. 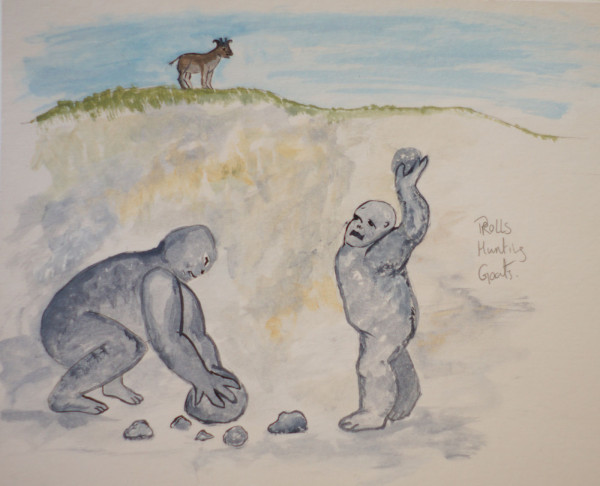 High in the Mountains of Dawn, there was a snowball fight.  This was won comprehensively by Thrar, and thus was declared a triumphant victory for Belegost over the combined forces of Elves and Men.   Angruin spent the snowball fight looking out for orcs and attacking Mastodons, and was thus deemed by the rest of the party to be No Fun.

However, shortly after this, we saw a dragon in the far distance flying over the mountain-peaks.  Fortunately, it didn't see us, but if it had then the snowball fight would have had a very unpleasant and ignominious ending.  It was a white dragon, an old one, one that had been part o the last offensive of the War of Wrath, when Morgoth released the winged dragons in his last defence, before Thangorodrim fell.  It used to be called the White Death, that dragon, but apparently it's known around here as Sholingelan.

We came down out of the Mountains of Dawn into Ralia, a place where both Elves and Men still live.  Most of the inhabitants are Men, the Elves live on an island in the river, connected to the banks by bridges, a place known as the River Kingdom.  We had found the home of the River King's Daughter! 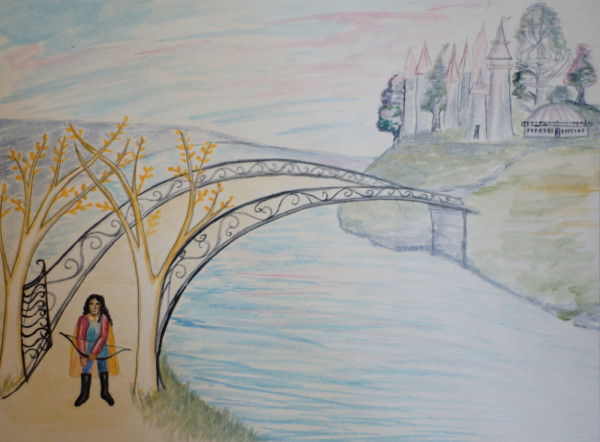 The River Kingdom Elves are very keen on bright colours, but that wasn't the oddest thing about them.  The oddest thing about them by a country mile was that they had heard about the Valar (having been, of course, invited to Valinor with the rest, back in the distant past).   And they had decided that instead of going to Aman to see the real Valar, they would simply give people the role of playing the Valar as a sort of game!  The first one we met was someone who played the role of Orome, and his entire job in life was to do a terrible job of persuading the Elves of the River Kingdom to come to Valinor, so they wouldn't actually have to go to the trouble of moving house.

Angruin, who has seen the real Orome, spent a lot of time in the River Kingdom biting his lip and trying desperately not to laugh, with limited success.

The River King,  Kul,  king of the Pendi tribe,  turned out to be someone that Thingolodh had met long ago at Cuivienen.  There were a couple of those awkward conversations that you have when you meet someone you knew faintly a very long time ago, and feel you should be able to come up with something to say to them.  It was amusingly awkward.    But Kul DID have a daughter, and she did fit the rather vague description that Ecthelion had been given of his lord's dream.

Ecthelion, who it turns out as well as being able to walk hundreds of miles in perfectly white boots, is also gifted with the ability to carry delicate jewellery long distance in a backpack, presented the River King with a spectacular Mithril crown (mithril being, of course, found quite plentifully on his home island, Numenor.)  He had brought a necklace for the River King's Daughter, too.   The diplomacy was all going swimmingly, so it was time for us to set off to the Numenorean colony of Ciryatanore, where Ecthelion's lord Irimon lives.

I did ask a few questions at this point, such as 'How does this help us find the Rings, investigate Sauron, and overthrow Ren The Unclean, who we suspect to be in league with him?'  The answer turned out to be  'With a really big Numenorean army'.   Which seemed pretty convincing, to be honest.

So we sailed off to Ciryatanore, and a very pleasant journey it was, too. 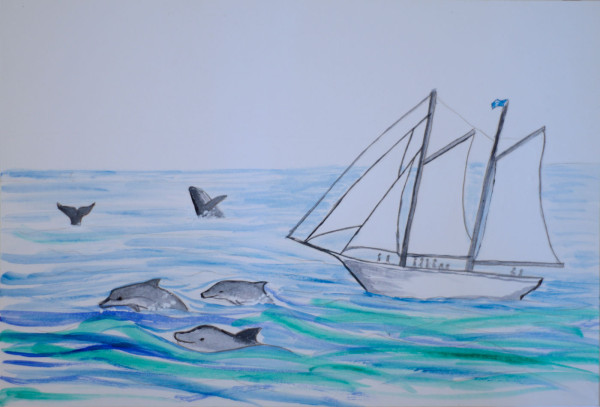 Prince Irimon was a very happy man when Ecthelion arrived and was able to say he'd found the River King's Daughter.   That's Thorofin standing behind Ecthelion, showing off his hair, and Thingolodh with the beard, clearly wondering when the speeches will be over and we can get to the snacks.
Thrandin, Thrar and I got bored with the speeches pretty quickly, so we were checking out the architecture instead.  It was not terrible, but we had, obviously, some suggestions. 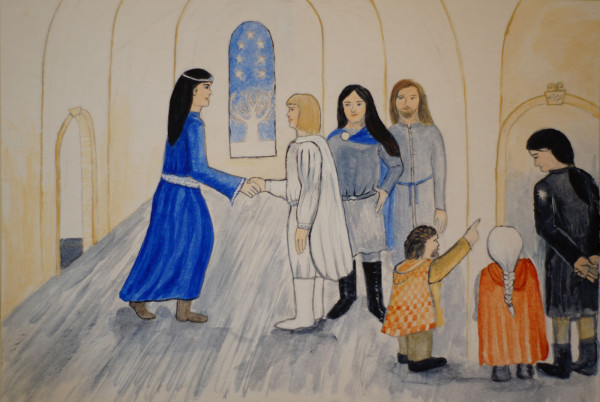