Here are some things I made for Fëanorian week on Tumblr.   I resolved initially that I was going to go for nice vague landscapes with small figures, so that I wouldn't have to stress about faces, and not spend ages working on detail.   I wasn't going to write anything.  Oh no.  Not me.  That would take way too long.

Maedhros at Himring.  Didn't really intend to spend so long thinking about terraces and doors, but never mind, it is a tiny figure in a landscape at least. Star of Fëanor on the gates, of course. 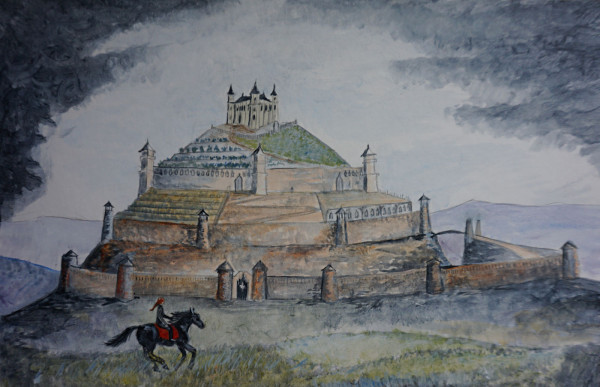 Maglor singing sadly on the beach.  (specifically, on Whitsand Bay, possibly would have been a better painting if I'd made a fantasy beach rather than copying one of my photos from a couple of weeks back, but I quite like the sky) 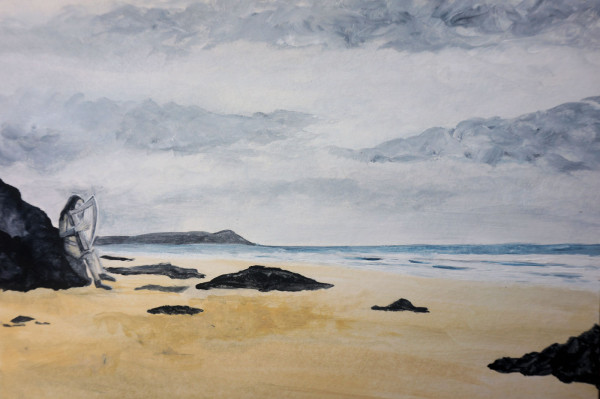 This was supposed to be a picture of Huan (who, as I have previously argued, should be a borzoi), but I was on a roll and added Celegorm On A Horse.  Hmm. Faces. 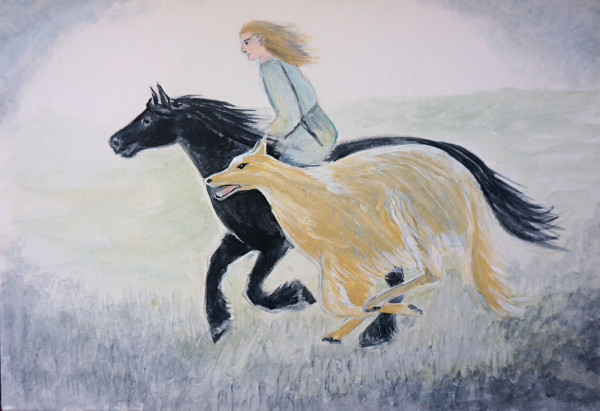 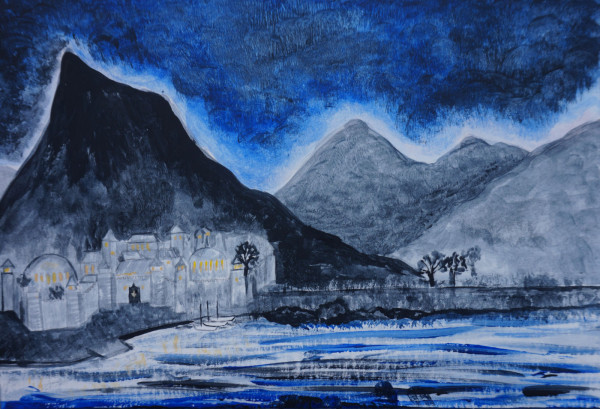 Curufin.  In fact, Curufin giving young Celebrimbor a lesson in sword-making.  Faces.  But I do quite like it and it didn't actually take that long to paint because I found a perfect sword-making photo as a reference.  It makes such a difference to have a reference where the lighting is right. 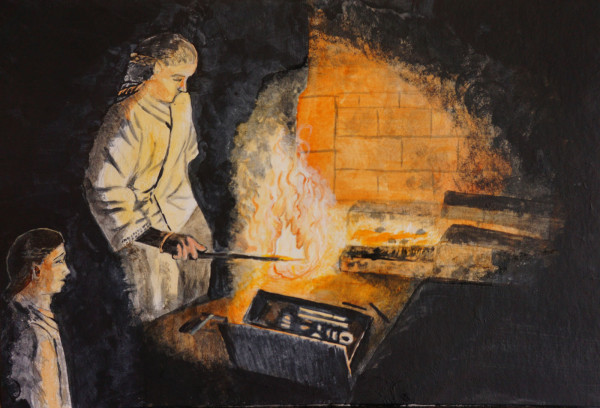 AND THEN IT WENT ALL PEARSHAPED.

I have a double-painting of the death of Amrod and Amras at the Havens of Sirion which I need to photograph and will add tomorrow.  It really does not fit the 'simple landscape with a figure or two' thing.

And then when I was walking the dogs I was thinking about Dead Fëanor, and thinking, well if he did go to the Halls of Mandos, what on earth would they do with him?  And how do the Halls of Mandos work, anyway?  I just find the 'all the spirits are naturally solitary and don't want to talk to one another or do anything other than sort of hover about in silent introspection' thing so unlikely.   If they are like that, then most of the personality seems to be entirely missing, and what is even the point of the immortality?

And before I meant to, I found I had written the First Age, rendered in 4200 words of text messages between Fëanor and Nerdanel. With special reference to the importance of talking to dead people and making sure they have plenty to do, because I just think that being in the Halls of Mandos in the way described by Tolkien would be like being in a very specific kind of hell. Not by design or deliberation, but just because being stuck there with nothing to do but think would be THE MOST AWFUL.

And then,  I wrote Fingon, Maedhros, Caranthir, and Amrod and Amras meeting again in Mandos.  Partly because I felt I'd made  Fëanor apologise for things a bit easily in the first one, so I wondered how being apologised to by Fëanor might seem to, say, Fingon, but also because I felt a bit sorry for Amrod and Amras, who always seem to be 'and Amrod and Amras' even when people don't decide they want poor Amrod toasted by accident by his father.  I don't like that story-version at all (Not one of his own sons. And it makes no sense with the rest of the story, and I don't even think the rest of it would work properly with that varient. ) I don't even think from the way it's framed that it was intended as history so much as legend.  SILMARILLION ALL THE WAY for Amrod please.