Random Mine of the Day: Wheal Sheba

I thought I'd run out of the most conveniently located Random Mines of the Day near my house, but I'd managed to completely miss Wheal Sheba, near Luckett. 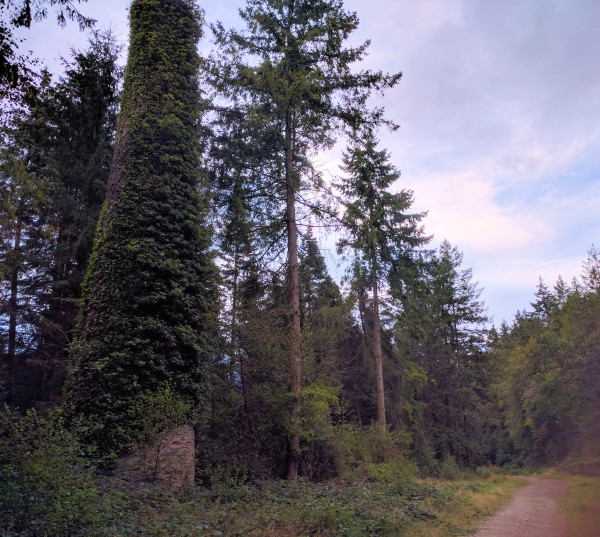 The majority of work at Wheal Sheba appears to have been centered on the New Engine Shaft and Old Engine Shaft at the western end of the valley, towards the hamlet of Old Mill. There's a visible chimney and various ruins among the trees, but there seems to be very little information about it.    There's nothing in the Heritage Gateway database about it, although the map shows the mine and the chimney above, and marks a number of shafts in the wood.

I was able to find this record for the chimney, from English Heritage via britishlistedbuildings.co.uk :
"Chimney. Mid-C19. Roughly coursed slate stone with red brick top. Circular section tapering to top which has moulded capping. Remains of adjoining engine
house are very fragmentary and are not included in this list. Wheal Sheba was a copper mine in operation from 1843 to 1867 under a variety of names and ownerships."

Have another picture of the chimney, although I think we'll have to take the red brick top on trust. 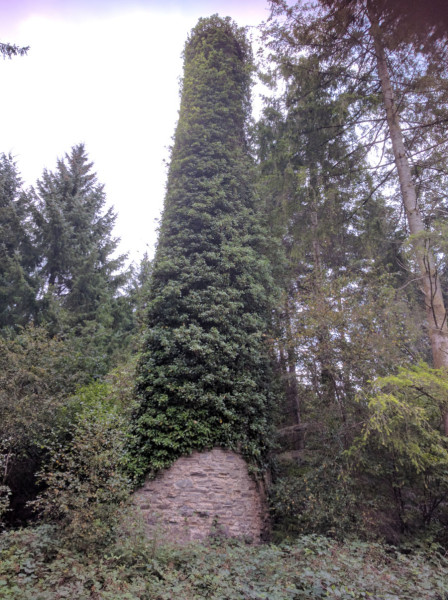 A little further up the stream that runs though the valley bottom we came across this concrete walkway, which seems likely to have some connection to the mine.  Just behind where I was standing, there is what looks like a cave running under the path and back into the hillside.  I'm not sure if it's just a cavity or the beginning of an adit.  And further up the stream, according to the map, is an ex-pumping-station.  However, this looks a bit modern to be nineteenth century, so I am wondering about that 'to 1867' above.     New Consols mine in Luckett was revived briefly in the twentieth century, and I'm wondering if this was too.

Whatever it is, it is a handy way for lurchers to cross the stream without getting wet feet. 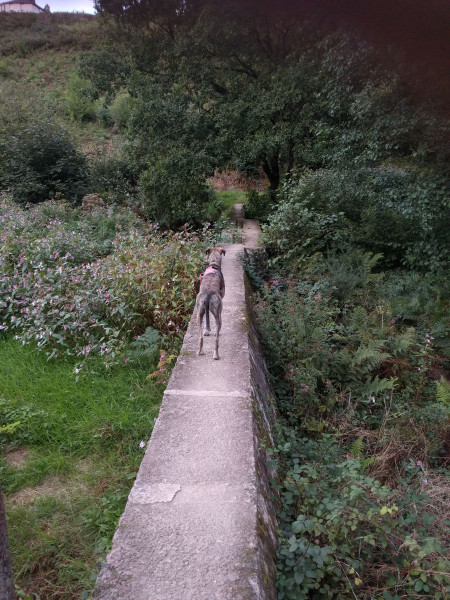 In this valley, according to the Heritage Gateway,  there is also some evidence of the earthworks from medieval streamworking - for tin, I assume, although I can't find much about this.  The earthworks have apparently been partly destroyed by the newer mine, but  I intend to go back and see if I can spot any still visible remaining bits.
Tags: cornwall, mines, mining, tamar valley
Subscribe