And now my tale grows over-long...

This might be a good moment to show The Map of (most of) Middle Earth*. Here it is. 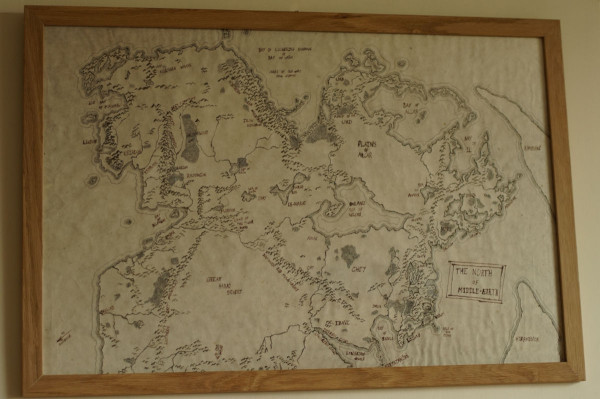 Leaving victorious King Feren to settle onto his throne in Urd, we set off to journey South, heading for the Forest of Myr.

We travelled for weeks across the Plains of Alcar.  Vistas of grass in all directions, and a diet of unpalatable yoghurt and Urd jerky.  Old Thingolodh working endlessly on his paper on the Culture of Urd on the way.  I said to him : you can sum up all these Men in four words.  Brave, brief, treacherous and savage.   But Thingolodh has written reams and reams of stuff that will eventually sit on a shelf gathering dust in Mithlond or Rivendell, no doubt.

We'd been planning to visit Myr for ages, as there were rumours of strange Elves living there. We thought they might be a useful source of information about possible Sauronic activity, and perhaps even allies. But once again we were diverted. On the road, we met a young girl, Shen Lee, riding an ass.  It seemed rather a risky thing for her to be riding alone across these wild lands, particularly when we sighted Variag riders watching from the skyline -  so we offered to go with her to her home.

It turned out that Shen Lee was returning from a diplomatic mission, a secret visit to the Princess Felli of Chay, half-sister of the emperor.  Shen Lee's great grandfather, Master Lee, had once been Left Hand of the Emperor, until he was replaced in the most brutal manner by a new Left Hand under the new Emperor, Chun.  His family had been killed, all save Shen Lee and hewas exiled, without his tongue or eyes, to this distant land where he had been offered hospitality by Shesh, matriarch of the Asdriag tribe.

When we arrived at the Great Yurt of the Asdriags, we gathered more news.  In particular, that Ren the Unclean, prefect of Ang-renn province, was a sorcerer, and was thought to be allied to the orcs of the Green Mountains.   This was interesting.  It sounded like exactly the kind of situation where Sauron would be tempted to meddle - and a good deal less alarming than th sunken city of Rhest.  Men, no matter how savage or treacherous, are greatly to be preferred to Balrogs.

We also heard that the Asdriags were under pressure from other more aggressive peoples such as the Variags, and so Master Lee, seemingly undeterred from political activity by his terrible treatment, had resolved to negotiate a treaty between them and the Empire of Chay that would benefit both peoples.  To this end, he had sent his only remaining great grand daughter to Chay, from which she was now returning.  A brave choice indeed.

Princess Felli's message suggested that the Emperor Chun would look favorably upon an alliance if it was presented suitably, and so Shesh and Master Lee determined to send formally to the Emperor himself, sending Sessamin, Daughter of Shesh, with a gift of 200 superb Asdriag horses, to propose an alliance.  Much impressed by the sight of Elves, who were, it appeared, creatures of legend both here and also in Chay,  they asked us if we could consider travelling to Chay to make their case.   This would give us an opportunity to find out more about this Ren, and there was no urgency to visit Myr, so we agreed, on condition that the Asdriags would provide us suitable mounts for the journey.  The Urdish horses were sturdy and serviceable enough, but slow, and not particularly pleasing to the eye.

Thrandin had formed a great attachment to his spotted Urdish pony, who he calls Folt, so we needed only four horses.  Thorofin chose a fine silver stallion and named it Thilia, and Sirithglor requested the horse with the most gentle and cooperative temperament, a skewbald named Cheerful.  Thingolodh refused to name his horse, which like his last was a chestnut.  I chose a black gelding with a white star on his forehead, and named him Firya, hoping this would mean that he would be longlived!

It took some time to transport two hundred horses to Chay, particularly the journey across the Sea of Helcar, though fortunately we were able to take passage on one of the monstrous purple-sailed ships that trade across that great inland sea.

In Bei, the capital of Chay, we encountered, among others,  a man who called himself the Rat Emperor, a man named An Fu.  He had a most suspicious difficulty in getting to the point, was clearly a criminal of some kind and drank a great deal of green tea.  Once we had got through his many circumlocutions however, we discovered that he was also some connection of the Numenorean settlement in Ciriatanore.

He had sought us out because a Numenorean representative, a knight who had come to Chay was being held as a prisoner, under a powerful enchantment that An Fu felt was beyond his understanding.   The knight was being held, not in an official prison, but in the house of a man named Pei-san, a connection of the Emperor's current Left Hand, one Fang Chau, who by all accounts is a very malign influence upon the Emperor, and was responsible for the terrible treatment meted out to Master Lee and his family.  Although, I am inclined to feel that a lord must be responsible for the acts he causes to be carried out, no matter what he is advised to do by others.  But then, some advisors can be very convincing, particularly when it comes to Rings...

Anyway, through his unofficial connections, the Rat Emperor had been able to find out so much, but had not been able to free the knight.    We made a tentative alliance, and the Rat Emperor agreed that he would take action to prevent the Emperor's Left Hand being present when we presented the Lady Sessamin and the gift of horses to the Emperor, in return, perhaps, for any assistance we could offer.

Considering what to do about this matter, we rode with the lady Sessamin and all the horses,  to the Emperor's Palace, a fine building, much decked with emblems showing the Emperor's wingless-dragon emblem.  A dragon-banner is not one that I would wish to fight under myself, remembering the memory of Glaurung at the Nirnaeth Arnoediad.  He was an impressive beast,  I suppose, but he was also very terrible.   But I understand that no dragon has been seen alive in this land for many lives of Men.  At any rate, they love their dragon-pictures.

Thrandin had the horse-herds arrange the two-hundred Asdriag horses in the shape of a great dragon drawn up around the palace, to present them to his Serene Excellence the Emperor, and the Emperor loved it.   He was delighted with the horses, delighted with the Lady Sessamin, and determined that an alliance with the Asdriags should be signed immediately.  Very soon, it appeared that a marriage to Sessamin would be an important part of this, and indeed that it would be completed that very day.

The Rat Emperor did his work well, and by the time the Emperor's Left Hand arrived at the Palace, accompanied by that very Pei-san who we knew was holding the Numenorean captive,   the Emperor himself was safely wed to Sessamin, and the Asdriag alliance had been signed!

Having achieved so much, it was no problem at all to nip out of the wedding celebration party for an hour or so to break into Pei-san's house and steal the knight.  We left the dwarf behind at the party to hold the fort and eat canapes.  He's not very good at being stealthy.  He will wear chainmail all the time, and that means he jingles.

I will mention in passing that I'm rather proud of having removed the roof of the house so neatly, so we were able to climb in and out again carrying the knight, and leave the roof with its elaborate ceramic tiles, in better order than it had been beforehand.  Tiling is really not my area of craftmanship, but I can lay a tidy enough tile if called upon to do so.

Sirithglor tried to break the enchantment that held the knight trapped in sleep,  there and then in the house, inside the little room where the knight was imprisoned.  It would certainly have been more convenient if he had been able to climb out on his own.   But the enchantment was too strong, and there was something dark and fearful about it that left her shaken and distressed.

Once we had carried the knight quietly away to a safe place, it was left to Thingolodh, Thorofin and myself to investigate the problem.  Enchantments are not really Thorofin's area, but he was able to lend us strength while we examined the thing, and very nasty it was too.  The knight's soul had been caught out of his body by a terrible force that held it locked into a dimension of dark torment.  And that force was horribly familiar to me.

A little background: Of the rings made in Eregion as a set of Nine, the Ninth had an unusual power.  It could be used by a being of lesser will to call upon the power of another, and use his greater power as if it were his own.  I remember hearing about the theory when it was first proposed, it seemed like *such* a good idea...

This was how the knight's soul had been locked into the darkness.  Someone, a human sorcerer, most likely, had used the Ninth Ring to call upon the power of Sauron,  and set a curse upon the knight.  The signature of the ring was quite unmistakeable - and as for Sauron, I'm not likely to mix his style up with anyone else again.

Here we are looking at it: in order, Thorofin with his long dark hair, Thingolodh, who like his lord Cirdan is old enough to have a beard, and me.
Sirithglor in the background is singing a song of healing.  She didn't want to get too close. 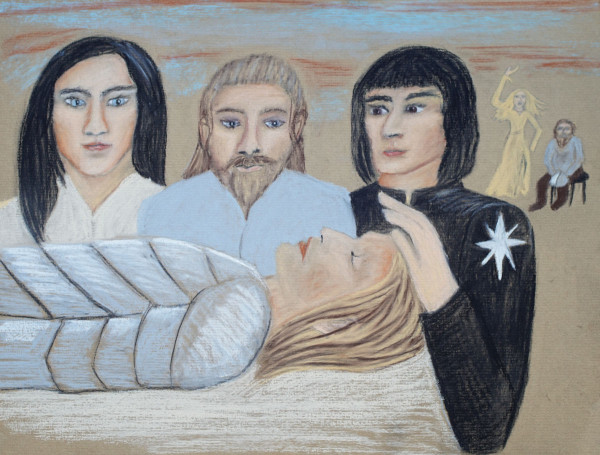 Thrandin is just waiting for us to get on with it, I think.
Breaking a curse set through the Ninth with the power of Sauron behind it was not an easy job to do.  Fortunately, Sauron did not seem to be paying any attention to his curse just at the moment, so it was a little more brittle and less robust than it might have been.  (I do hope that he's busy trying to drain the water out of his unpleasant stronghold in Rhest).   We were able to pry it open, and then the knight's soul came snapping back neatly into place, and he awoke.
I was rather hoping (as I am sure anyone who has not yet filtered out my 'roleplaying' tag is) that this would be the last post.  But No.  It's not.  We still have to go to Myr, and discover exactly what Orcs are made of....

philmophlegm.  Officially in the adventure we don't have this map, although we do have a book of Numenorean maps that Cirdan lent us, which apparently came from the lost property office in Mithlond or something along those lines.  But it's awfully useful to have everything on a big map that we can point to and say 'we're going this way!'  You can see the familiar bit, top left. &nbsp;
Tags: arty stuff, holidays, noldor, pastels, roleplaying, tolkien
Subscribe