'Well, you do want looking after and no mistake: your party might be on a holiday!'

Last year around this time, we went on holiday to Middle Earth in the Second Age, and there wrought many mighty deeds.  But there was much still to do, and we still hadn't found Sauron -  so last week we resumed operations in the distant lands far to the East of the Sea of Rhun.

We were down one dwarf, young Thrár, son of Thangrin from Belegost.  He had unexpectedly been called upon to judge a saki competition was  sent off to the Iron Fist Dwarf stronghold that we visited last year, to carry messages to King Motsognir, in the company of the Blue Wizard Morinehta.   My Noldorin jewelsmith Angruin hopes that he will be all right.  For one thing, you can't be too careful about people who say they are envoys of the Valar, and for another thing, even if Morinehta IS an envoy of the Valar, that doesn't mean you can trust the bugger.

Also, Thrár had been having some disturbing dreams about rings, and almost all the Seven and the Nine are still missing.  The only one of the Seven that we know about is the one that I delivered to Durin VI in Khazad-dûm shortly before everything went horribly wrong in Eregion.  I really hope that Durin is sticking to the 'keep this in a box, do not wear it' approach we agreed on.

Anyway, before Morinehta went off with Thrár, he introduced us to one Ti-en-du, Queen of the Cranes.   Here in the East, it turns out that the Lords of Birds are not eagles, but cranes. Ti-en-du had a great deal of news for us, although it was difficult to work out what some of it meant - for example, I'm still not sure about 'Most mornings in Ciriatanore, a tall man greets the Sun'. 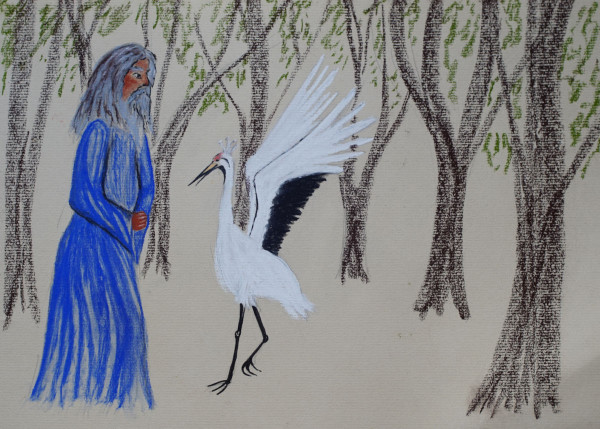 However, the news that orcs are multiplying and stirring in the desert was clear, and there were other tidings that suggested things were less than peaceful here in the East.  In particular, the news that the Orcs of Raku* wear red wolf-claw emblems seemed disturbing, and we resolved to investigate, even though it meant a long walk East through the forest of Uab and across the plains of Alcar.   Morinehta asked us to take his regards to King Hormerath of Urd, if we happened to be passing that way.   I was unable to come up with a really good reason why we should not do this, other than 'Maiar are not necessarily the nice people they appear to be'. So we agreed.

We soon had proof that the orcs were on the move, as we were attacked by a small band of them on the road.  A small, foolish band.   Sirithglor, our diaphanously clad Sindar lady, cast a glamour upon our Noldorin hero, Thorofin, in order to make him still more terrifying, as beautiful and terrible as a thunderstorm.

Thorofin descended upon the orcs in fury, like thunder out of the mountains, and most of them fled.  One, however, shot me in the stomach, but fortunately not very vigorously, so I was able to shoot him back and pin his bow hand to his side.  Ha.     Meanwhile, Thingolodh of the Falas slew his orc, very elegantly.  One might almost say in a balletic manner, although also rather slowly, due to being several thousand years older than Thorofin.

Undismayed by orc-arrows, we went on through the woods and tiny tiny villages of Urd.  The Urd Herders were delighted to hear of our orc-slaying prowess but had sad news : their king, Hormerath, was dying.  The more dutiful members of the party, in particular our sturdy Diplomatic Dwarf, Thrandin, felt that it was important that we bring Morinehta's greetings to King Hormerath before he went off to whatever mysterious fate awaits  Mortal Men, so we hurried onward.

In Poztar, capital of Urd, we found King Hormerath still alive, but somewhat troubled by the problem of the succession.  There seemed to be a great many possible claimants, and since the Urdish are unaware of advanced Elvish concepts like primogeniture, preferring instead to appoint their king through the barbarian process of voting, there was considerable potential for political tension.

Here is the ancient Banner of Urd, in case you happen to be interested in Ancient Urdish heraldry.  It shows a pair of Urdbulls. 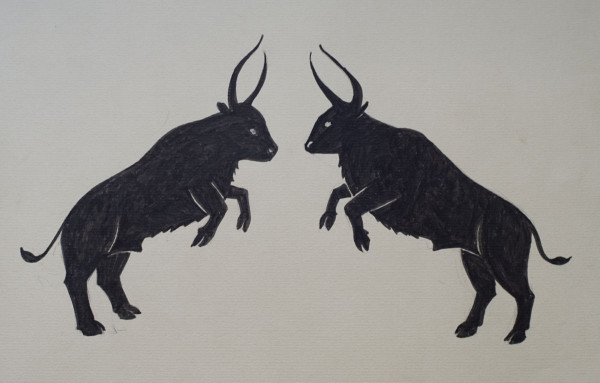 We passed on Morinehta's greeting, but before we could even properly look into whether Hormerath's condition might be aided by Elf-magic, a humble Urd Herder, one Hunor by name,  stumbled into Poztar to report that a local village, Bagu, had been devastated by unknown attackers, who had wiped out the residents and all their Urds (or possibly, herds.  He had an accent.)

Leaving our ancient Falathrim elf Thingolodh in Poztar, we hurried out to investigate.  The Urds of Poztar seemed unenthusiastic about joining us, but one Urd, Gyula, a friend of the king's second son, Murat, was brave enough to volunteer his services as guide.  This later proved to be extremely fortunate, although at the time I admit the company of a long-haired and rather niffy mortal was rather irritating.

Here we are riding out through the wooden gates of Poztar.  That's Thorofin on the left, then Gyula next to him in a thoroughly appalling hat,  Thrandin on a pit-pony, and me, on the horse I borrowed from Thingolodh.  (I don't have a horse.  I had one in Eregion, but I couldn't take it into Khazad Dum with me, so who knows what happened to him).

I don't know where Sirithglor was at this point.  Doing her hair, possibly. 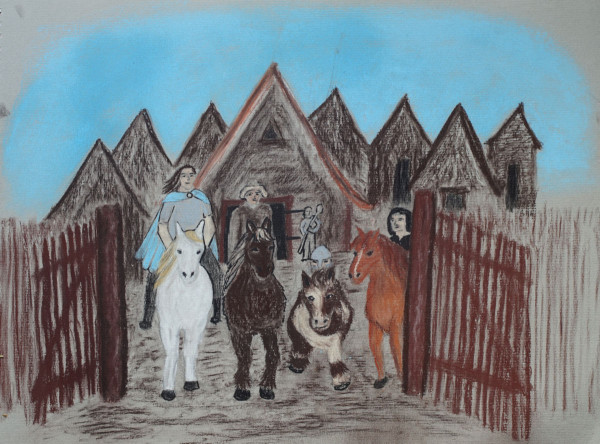 Bagu village was a mess.  There was not much left of the inhabitants or their herds. It had clearly been attacked by monstrous animals, and before long we found the tracks of wolves, leading east - to the mysterious land of Raku.  The Urd never go to Raku, so all we knew of it was what we'd heard from the Crane Queen, that the Orcs of Raku wear red wolf-claw emblems.  This seemed to tie in, so far as it went.

We followed the tracks, despite the worstening weather,  to a bridge over a deep gorge, a high bridge, with four tall towers, two on the far bank and two on the near bank, each accessible only by ladder.

The place was infested with orcs, although it was far too well made to have been built by them.  Thrandin reckoned it looked dwarf-made, and I won't say he was wrong.   The curve of the bridge and the shape of the towers, along with the dim light (there was thick cloud, and a blizzard had begun) made it hard to see the other side, but we could see movement over there, too.

But a bridge full of orcs is not really serious opposition.  I used my connection with fire to set light to the clothes and bows of the orcs on the nearest towers, and Sirithglor followed up with confusing wind filled with the wings of hawks.   And Thorofin charged over the bridge.  He found a troll and another detachment of orcs over there, but he smote them like the wrath of the Valar, and they did not last long. 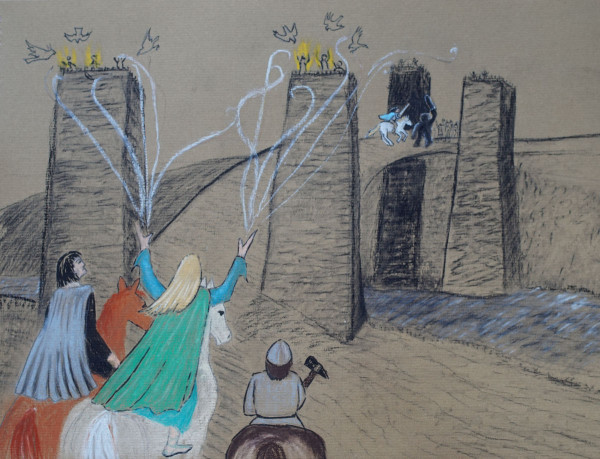 Before long the bridge was clear, and we crossed it, with Thrandin on his pit pony at the back, complaining bitterly that we hadn't left any orcs for him.

But all was well.  We went on into the mysterious Land of Raku.  There we found a barricade across the road with a sort of small fortlet that was simply humming with orcs.   I suggested that we stand back and let Thrandin have his go at them this time, at which, everyone else looked at me and made sarcastic comments about the condescending attitudes of the Noldor.   Honestly, you can't win.

Sirithglor wrapped Thrandin in a glamour, and he thundered threats at the orcs.  This proved surprisingly effective.  I suppose this must be this sort of thing they used to do all the time in Doriath, though now I think about it, probably not with a dwarf involved.  Anyway, the orcs panicked and leaped into the surrounding marsh, and we went on. 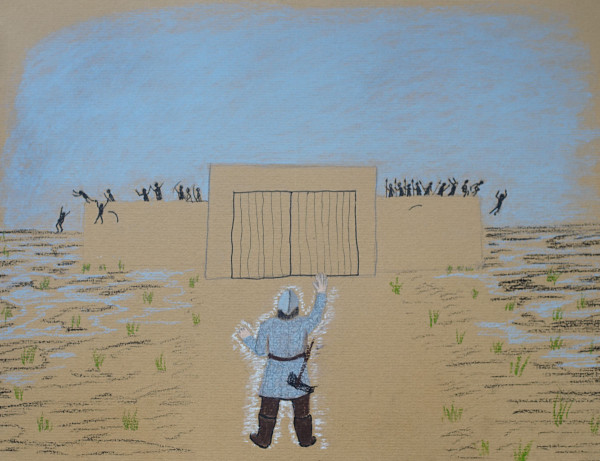 * There is a faction that believes this placename should be spelt 'Racku'.  I think that looks silly, so in the best Fëanorian tradition, I've changed it so it appears more pleasing to my eye.
.... Continued here!
Tags: arty stuff, holidays, noldor, pastels, roleplaying, tolkien
Subscribe