Random Mine of the Day : Holmbush Mine / Hitchen's Shaft Complex / Little Hurtdown

Today, I have been mostly staring blankly into space in a fog of cold-induced blurgyness.  I did not go to Holmbush mine, because the tracks around there get awfully muddy when it rains this much, and also so as to walk dogs somewhere where I could basically tip them out into a fenced area in order to not have to engage brain or travel at more than half a mile an hour.

But if I'd walked a bit further around the hill, I would have seen this: 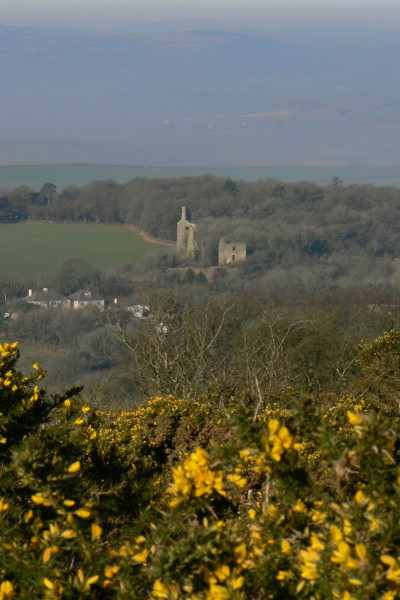 The Cornwall Heritage Environment Record doesn't have much on Holmbush mine, but fortunately because the enginehouse is a listed building since it is ' one of very few 19th century engine houses to have retained a considerable part of its original roof structure into the 21st century', Historic England has lots about it.
Here's the enginehouse peeping coyly from behind a spoilheap, and if I'd known its roof structure was notable I'd have photographed it, but since I didn't, here's a newer photo on aditnow, which suggests that the roof structure is unlikely to make it through another century. 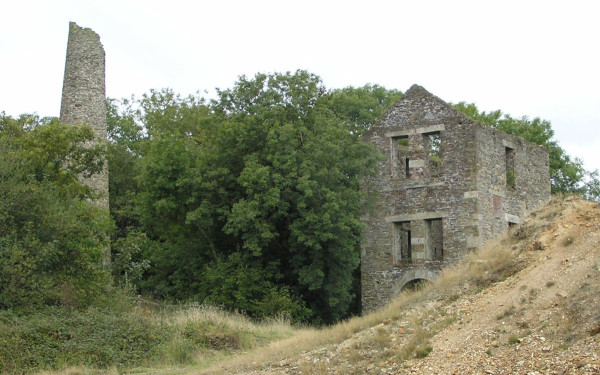 It's an older mine: Historic England says the mine itself was worked from the early seventeenth century, although these buildings are all later.  It was probably originally a lead and silver mine, which in the nineteenth century became a copper mine.  They had two lodes of copper, the original Holmbush lode, and the magnificently named Flopjack Lode, worked from 1861. From 1876 the mine increasingly focussed on the exciting arsenic market, rather than  the unprofitable and terribly passé copper market ( I am gaining a whole new appreciation of the side-effects of mineral price fluctuations)

The main shaft was called Hitchen's Shaft.  Sadly, I was unable to find out who Hitchens was, and why he deserved the honour of being commemorated by a giant hole in the ground.

The mine explains the existence of the village of Kelly Bray, which came into life to service the mine, but somehow survived its demise in 1892, and lives on as an agglomeration of houses around an assortment of industrial units.
Tags: cornwall, mines, tamar valley
Subscribe