Random Mine of the Day : Wheal Calstock, or Cotehele Consols, or Danescombe Mine

I must confess, I assumed when we wandered through this morning that this must be a later mine because there's so much preserved: lots of deep holes, still gaping alarmingly, multiple buildings still in use, that sort of thing.  But it turns out that this is not due to less time passing, so much as the preservative action of the National Trust, and the absence of any other use of the valley.  So, this is called Calstock Cotehele Consols mine, and this is its the chimney and associated engine house (now a holiday cottage) from the early nineteenth century. 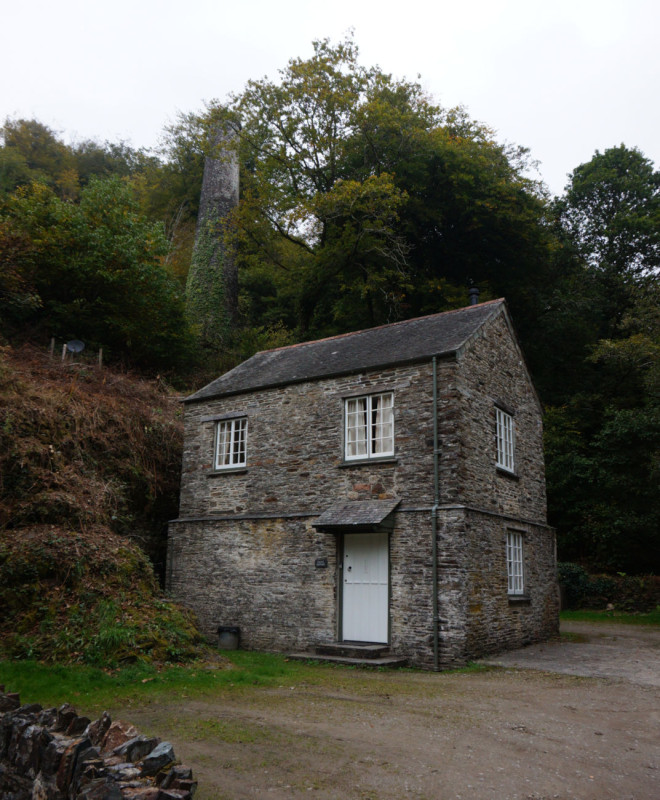 It's  shown on the 1838 Mining Grant plan, I learn.   "It is likely to have been built in the mid 1830s and to have been the first steam engine erected, not only on the mine, but also for a wide area in the Tamar valley. As William West is mentioned (a renowned mechanical engineer), it is likely to have been made at Harvey’s Foundry, Hayle. A 30" pumping engine was sited in the building from 1835 to 1843, when it was sold to South Hooe Mine. A larger 40" pumping engine was documented as being used on the mine from the 1850’s until it was advertised for sale in 1872."

Aditnow think that the mine may have been worked since 1820, under the name of Wheal Calstock, before becoming the property of the Cotehele Mining Company, and later merging with the Okel Tor mine a mile or so away, to form the Okel Tor and Cotehele Consols mining company.
This hole on the other side of the stream is not mentioned anywhere in the online records that I could find, but clearly it's artificial and has props, and I hope if you look closely at it you can just see that there's a little cart or something sitting inside, still waiting for a miner to come back and require its services. 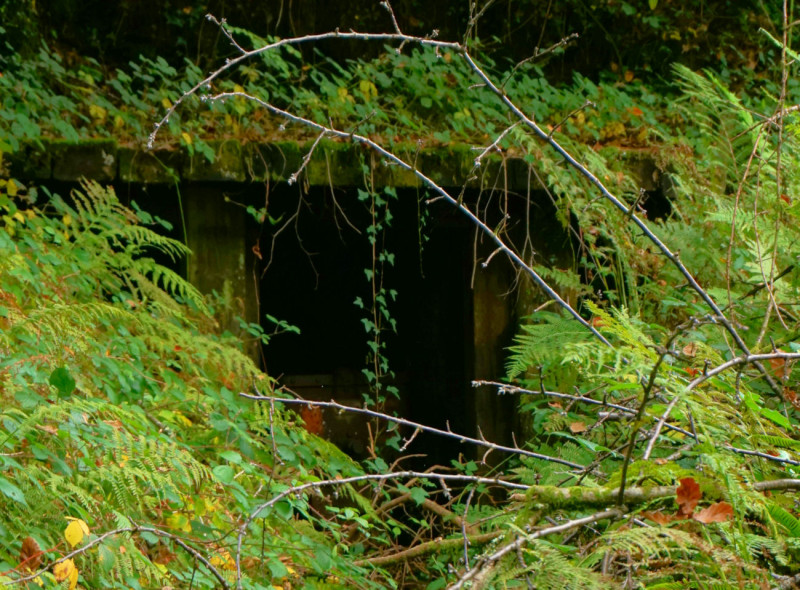 A little further down the valley there's this adit, draining clear water out of the mine into the stream.  There was once a waterwheel and a millpond in the stream just in front of this,  but there's no sign of those now.  The Danescombe valley is one of those narrow, steepsided westcountry combes, down which the streams come racing with terrifying fury at certain times of the year if the rain has been heavy, so it's not surprising that the waterwheel has not survived. 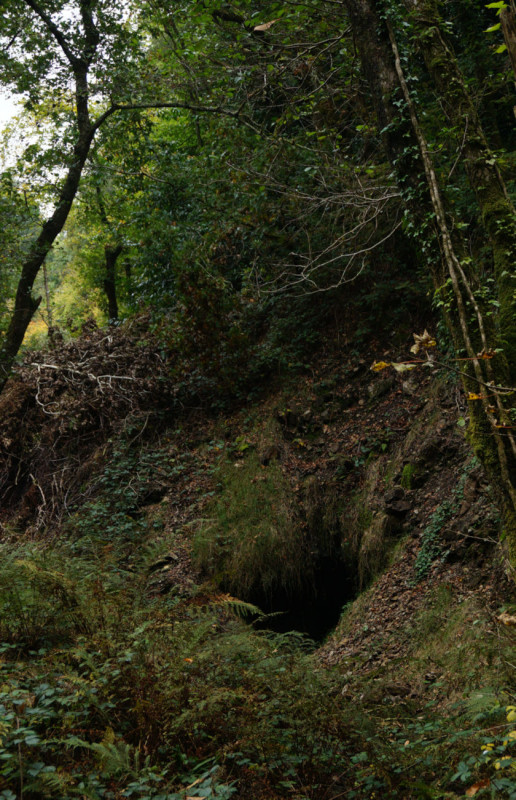 A bit further up the valley is a second Enginehouse, a rather large and impressive looking one which was built in 1881/2, perhaps to replace the smaller one? 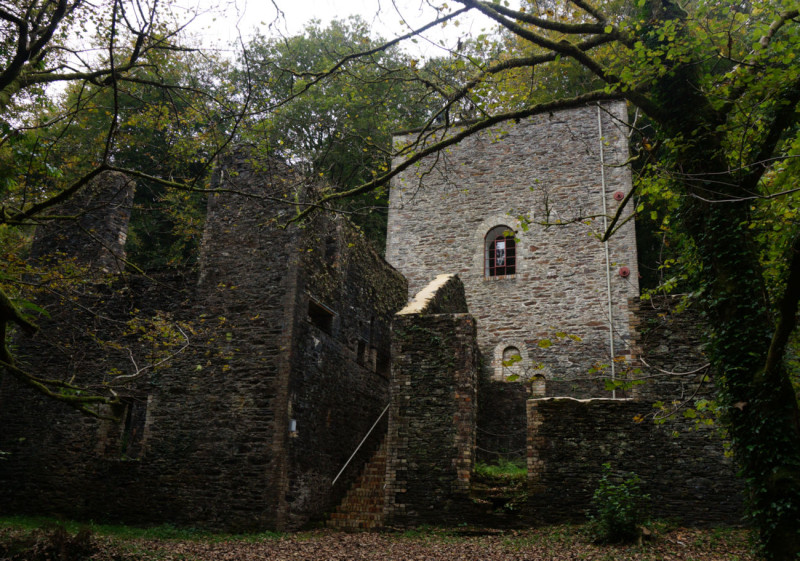 It's also a holiday cottage!   I always think it seems quite scary for holiday accommodation

Again, not noted on the HER record, but there's another big hole in the hillside next to it.  This one has a strong gate across it, presumably to prevent passing tourists from wandering in and being attacked by goblins. 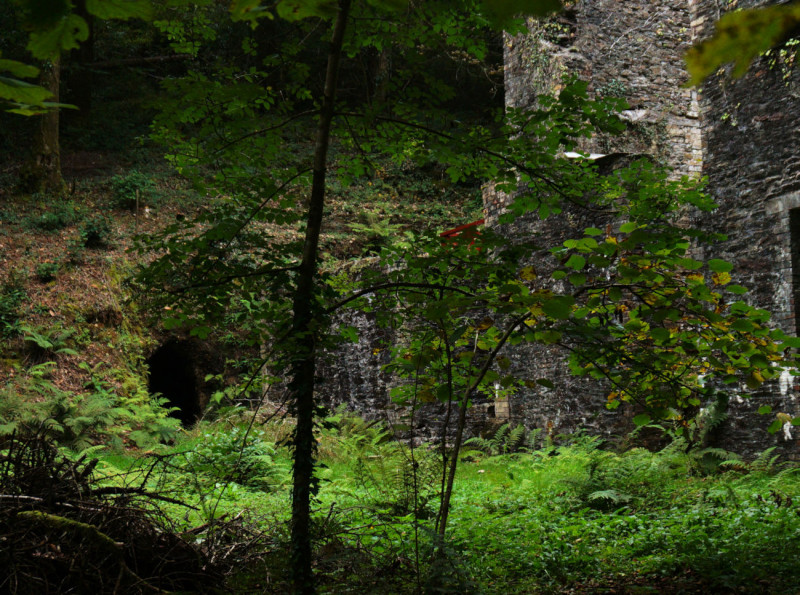 It was a copper and arsenic mine.
My goodness, they mined a lot of arsenic around here.  I began to wonder why they needed quite so much of the stuff, so I looked it up.  I knew about the use for insecticide and rat poison and in paint colours, but I'd forgotten that 'In the Victorian era, "White arsenic" or arsenic trioxide was mixed with vinegar and chalk and eaten by women to improve the complexion of their faces, making their skin paler to show they did not work in the fields. Arsenic was also rubbed into the faces and arms of women to "improve their complexion". '  Luverly.

I'm pretty sure that I didn't previously know that 'After World War I, the United States built up a stockpile of 20,000 tonnes of lewisite (ClCH=CHAsCl2), a chemical weapon that is a vesicant (blister agent) and lung irritant. The stockpile was neutralized with bleach and dumped into the Gulf of Mexico after the 1950s.'   Also, luverly.

"Scheele's Green, a copper arsenate, was used in the 19th century as a coloring agent in sweets"  That really makes you wonder what you are eating at the moment that future generations will be head-desking at.

While I was taking photos, I must have dropped my phone from my coat pocket. Fortunately, before I had missed it, a helpful couple of people had picked it up, called me to tell me I'd lost it, driven up to our village, enquired for me at the pub, been given elaborate and confusing directions by the assorted denizens of the pub, and finally called me to confirm my location before delivering it back to me. What lovely people!
Tags: cornwall, hair-raising food, inadvisable beauty aids, mining, random acts of kindness, tamar valley, things that make you go hmmm
Subscribe