The Council of Orodreth 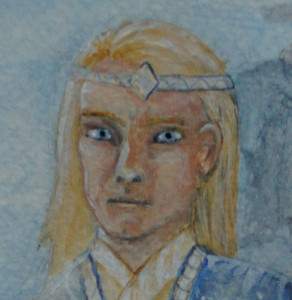 Detail of his face (definitely looks better in closeup, how strange).

And the full version: 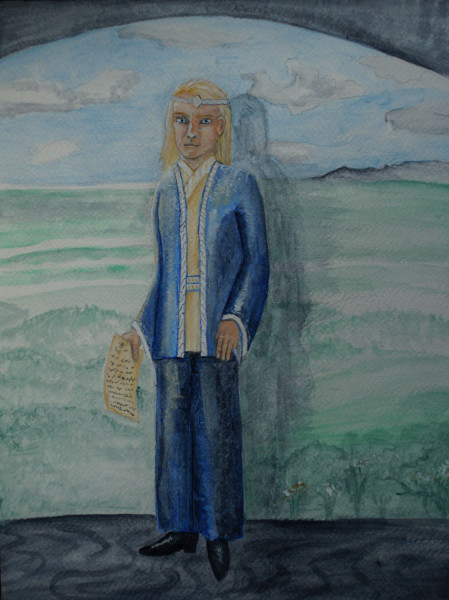 
This is not how it looked in my head.   I meant to have more light on his body, and his stance is slightly odd, and somehow his jacket has come out a bit 70's rather than vaguely oriental as intended.  In fact, he looks a bit like a doll :-/ Also I don't know what's wrong with his shoes, but there's *something*.   And his shadow is patchy.

On the other hand, I think the shadow does work quite well with the floor to give the impression that he's standing in front of a painting rather than a window, and given that his face is only slightly larger than my thumb, it's not bad.

To do: lots more full body figures until I can get them more right.


And the brief story that the painting is from:

The Council of Orodreth: 1634 words, gen.
In which Celebrimbor watches as Nargothrond decides not to join the Union of Maedhros.

There were no windows in the council chamber of Nargothrond.  It was buried deep in the rock in the heart of the hidden fortress-city.  But the warm evening sunlight, channelled through hidden passages in the rock, lit the west wall of the chamber, which had been cunningly painted with a great sweeping landscape. It showed Western Beleriand as it might look to an eagle soaring high above the Falls of Sirion, with the rivers tracing silvery across the wide plain and winding through the hills of the Taur-en- Faroth.  On the horizon, very far yet brighter than the rest, lay the silver line that was the Western Sea.

The sunlight shone on Orodreth the King as he stood before the council with the letter in his hand.  It caught in his pale hair, and in the silver tracery upon his sleeves, and gave the silver crown of Nargothrond a hint of gold.  From where Celebrimbor sat, Orodreth seemed a figure all of light.

Orodreth put the letter down beside him, and looked up to address the council directly. "So, there you have it. Stripped of all its fine words: Maedhros would call on the army of Nargothrond to join an attack on Angband.  What do you say, my lords and advisors?"

'If there is to be an attack, we must be in it," the young lord Gwindor said at once, his face alight with hope.  "The Battle of Sudden Flame was terrible, but we were taken by surprise. Morgoth's forces were on us before we were aware of them.  If we can strike hard, bring all the force of the Eldar together in one swift blow, I believe we could drive him back at least within the walls of Angband. Perhaps more.  If we could once break the gates of Angband.... The armies of Morgoth could not stand against us in an open fight."

"Doriath will not ally with Maedhros, or any child of Fëanor," Inglor sounded grimly certain. " Not now Thingol knows how his kin were slain at Alqualondë.  Not while Thingol holds the Silmaril.  This attack will not carry the full force of all the Eldar in Middle Earth."

Inglor was a leader of one of the lesser houses of Nargothrond.  He could not be called a coward -- no one who had come to Middle Earth through the frozen terror of the Grinding Ice could be considered that, but Celebrimbor recognised him as a voice of caution.  He had been one of Father's friends in Nargothrond too, which was presumably why he had not mentioned the other reason that Thingol would never consider an alliance with Maedhros, although everyone was thinking about it.   That reason was uncle... no... Celegorm's acts towards Thingol's daughter, Lúthien.

Celebrimbor tried to always use the Sindarin names now.  It was easier to think objectively about his family in the new language, using the names of Middle Earth, not the names out of his childhood in the West.

Lúthien, who had overthrown the dreadful lord of the Island of Werewolves.  Lúthien, who had freed the thralls of Sauron, among them many of the Noldor of Nargothrond.  Who, but for the trickery of Celegorm and Curufin, might have come there in time to save Finrod Felagund, the king that Nargothrond had failed.   The king that they had refused to follow into the darkness.

Nobody would mention Finrod, but the room was thick with the memory of him.  You could almost see him, standing opposite Orodreth, his face pale and shocked with at the realisation that of all the Elves of Nargothrond, only ten would willingly go into the dark by his side.  Realising that his people would rather listen to Curufin son of Fëanor than their own king.

Finrod haunted all of them, Celebrimbor thought, all of them apart from himself.  Celebrimbor had his own ghosts, but they were close by blood, and still alive.

"And what of Turgon?" Orodreth said, his face troubled, "I wonder what he will do?"

Another councillor shook his head unhappily. "The lord Turgon has not left his hidden stronghold for so long. Who can say if or when he will do so again?  He did not move to aid the agony of Dorthonion, did nothing to save the white tower upon Tol Sirion or help the thralls trapped on the Island of Werewolves.   Surely Turgon will not come to the help of Maedhros when he would not come to the aid of Finrod Felagund?"

"He waits upon the will of the Valar," Orodreth said, very gently.  "Your people suffered cruelly after the fall of the Tower of Guard, Guilin, but do not blame Turgon for that.  It was the Dark Enemy that took Tol Sirion, not our own people."  Gentleness was one of the things that stood out about Orodreth; he would never shout his people down, or overwhelm them with his will.  Orodreth would always listen before he spoke.  Father... Curufinand Celegorm had had to push him a very long way before finally he had refused to be pushed any more.

"Even without Doriath and Gondolin, the lord Maedhros has a great force at his command," Gwindor argued. "The letter speaks of new armies of Men and Dwarves out of the East.  The High King too will bring all the strength he has to this alliance.  We cannot be sure that his brother Turgon will not join him.  We could win."

The hope in Gwindor's voice was almost tangible. His brother Gelmir had been lost at the battle on the Fen of Serech.  Nobody knew if he had died or lived still, as a prisoner in Angband.

“They will not break the gates of Angband.  Nobody will do that, not until the Valar themselves come to our aid.”  That was Enedir, bringing the ghost of Finrod closer still.  His son had been one of the valiant few that had died by Finrod Felagund’s side.

“ Who knows the true strength of Morgoth? ” Orodreth’s face was troubled. “He was wounded by Fingolfin, so the songs say.  But he was of the Valar, once.  The walls of Angband are strong, and his beasts and agents are many.”

Silence fell, as the memory of the Battle of Sudden Flame ran from mind to mind around the council chamber. Many there had fled from the attack on Dorthonion or had seen Tol Sirion fall.  They had seen the rivers of flame, the dark armies of orcs led by Balrogs driving after fleeing Elves, the golden terror of the Dragon.   But Morgoth himself had not fought in that battle.  He had remained hidden in Angband.  What might happen if Morgoth himself should come forth against them?

And now the echoes of the words that Curufin had spoken to them when Finrod had called them to follow him were all around.  Dark words that conjured fear.  Thralldom in the dark of Angband, torment twisting them out of true until even in the halls of Mandos there might be no true healing.

None of them wished to remember those words, but the images tangled in the background none the less.  The dread of  unknown evil, the Shadow fallen on Valinor, the whips of Balrogs on the charred plains of Anfauglith knotted with the memories of those who recalled the terror of the Isle of Werewolves and the power of Gorthaur the Cruel.

Celebrimbor was still watching Orodreth.  The sun must have dipped behind the hills above, and the sunset gold was gone from the light.  Then he felt Gwindor’s gaze upon him.  Others were looking at him too,  sidelong glances from around the long room.  Then Orodreth himself looked up, eyes disconcertingly pale blue under the silver diadem, and met Celebrimbor’s eyes across the room.   Orodreth too could see the shadows of terror dancing in his people’s minds.

Celebrimbor looked down, hiding behind dark eyelashes.   There would be no rousing speech from  Fëanor’s grandson to urge the Elves of Nargothrond into battle.  If... Maedhros wanted to undo the fear that Curufin had set here, he would have to come himself to do it.

Celebrimbor would not lead them into the darkness, nor would he make them stay.  Let them make their own choices.

The silence went on, so deep that you could hear the faint hum of the great waterwheel that lay below the council chamber turning.

“I at least will go,” Gwindor declared defiantly. “I will go alone if there are none who will come with me,  and I will carry the honor of Nargothrond alone against the Enemy, with the High King and with anyone else who will choose to join us.”

And there was Finrod again, the memory of him like a blow to the face. Though not for everyone, Celebrimbor noticed, looking up as the murmuring around the chamber made it clear that the people of Nargothrond were no longer looking to him.   Finduilas the King’s daughter was watching Gwindor with bright eyes, for all that she had not spoken to the council.

“I will not lead out the army of Nargothrond to aid the sons of Fëanor,” Orodreth said slowly, and you could see that it cost him something to say it.   He paused, thinking.  “I will not risk our people to help the sons of Fëanor.  To help those who used Nargothrond as a jail for Lúthien, then attacked her after she had freed our friends and children.  ”

“Go, if you must, Gwindor, and take those who choose to follow you.  You may take any supplies and equipment you need.  I only hope you will come safely home again.    I ask only that you stand with the High King, and not with the sons of Fëanor.”

“Very well,” Gwindor said, and he strode out of the room at once, without looking back.