Ways to Use Hero Points, Banish Morgoth, and Transform Beliefs.

Continued from...
Soon most of us were back inside, using Sirithglor's sparkly but admittedly effective magic to get past some Morgoth-ensorcelled Pillars of Gloom into the Ghost Roads full of dead people.  You will note that Sirithglor wears different clothes whenever I draw her.   This is because she carries an enormous wardrobe of sparkly and more-or-less diaphanous garments at all times. 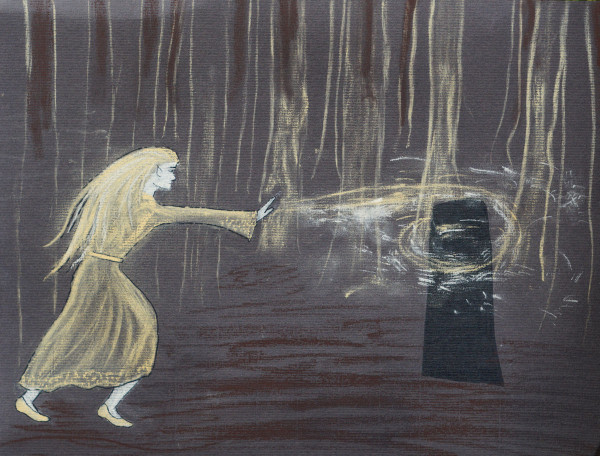 The Dead needed to be released from the Tendrils of Morgoth that were holding them trapped in undead torment.  Sadly, we had neglected to bring a Numenorean descendent of Beren, which turned out to be the only way to do this  ( damnit, there's always something you forget to pack!  We had loads of rope, too).

There were a lot of Pillars of Despair dotted around the place, and at one point the pressure all got too much for our antique dwarf-hero Thrandin.  His courage (and dice) failed him, and he got the heeby jeebies.

The only way to get him past the Pillars and continue with the adventure was, well, to toss him over the top.  And so I did.  In a sympathetic, dwarf-friendly kind of way, of course, so I didn't take a picture of that, because it could have been a bit embarrassing.  Turns out that those smithly muscles come in quite handy for dwarf-tossing.

Of course, we were all mighty heroes, one way or another.  So we all had Hero Points to spend doing Heroic things.  Here are two different ways to use a massive 3 Hero points:

1)Thrár identified a tree we found in the Deeps.  It was a really, really difficult tree to identify!  It turned out to be a Crystal Tree, created by Aulë The Smith himself, as a gift for Nienna.  As the youngest and perhaps least experienced member of the party, it was not easy for Thrár to figure this out.   In the picture, you can see him considering the matter, holding the only remining heirloom of his house, the Spear of Azaghal. 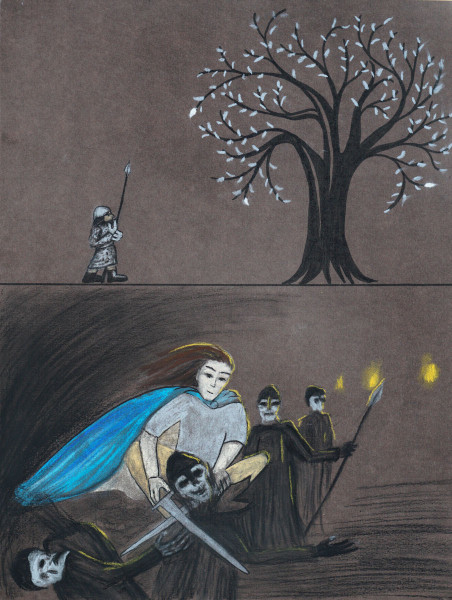 And above, you can see a different way to use three hero points, as the dashing young Noldo Thorofin of the House of Fingolfin runs spectacularly along the shoulders of a line of undead warriors, whipping off their skull-heads one by one with his two swords as he leaps from shoulder to shoulder.  It was the kind of thing that Legolas might have done in the LOTR movies, only, being a Noldo, Thorofin did it with vastly more style.


Four members of our party had brought along horses.  It was lucky that three of them were Elven Steeds, and one of them was a pit pony, as we went underground for about three days with them. 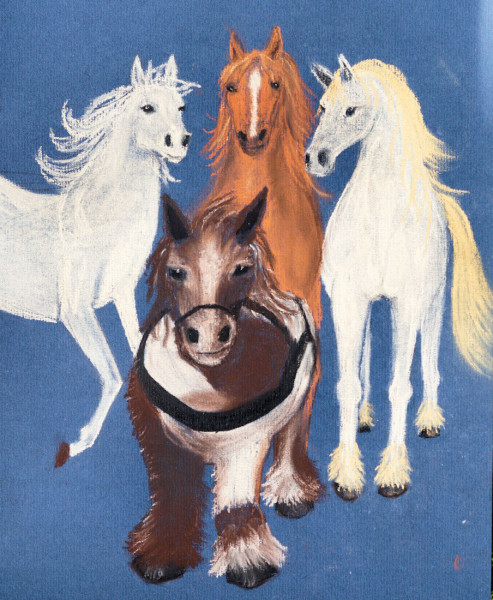 There came a point eventually when we had to accept that we were simply not going to get four horses down a ladder.

Thrandin and the lady Sirithglor had to go back all the way through the mountain and around the side, while the rest of us puzzled our way through a maze of tunnels that had been made none the more navigable by the random loon who had posted unintelligible riddles here and there around it.

It was no bad thing they went  back that way, actually, as they found a bunch more Undead people and were able to lay them to rest.   We found  a Mighty Statue of Morgoth.    I suspect ideally we should have tried to destroy it,  (rather than looking up at its loincloth, giggling, which was what we in fact did).

But the Dead started coming out of the woodwork like weevils at that point so Thorofin slaughtered some of them, Thingolodh made a Wall to block off some of the rest of them - and then we bravely ran away.   Or we tried to.  But we were on the wrong side of a monstrous Chasm in the rock, crossed only by one slender span of bridge,(which I would swear looked familiar...).   In the middle of it, the King of the Dead was waiting.

At this point, we could definitely have used the services of the diplomatic and charming members of the party, but unfortunately they were off horse-wrangling, so what was left was me.    I felt that trying to use my charisma was never going to work. Instead, I went with logic, and pointed out that it was just silly of him to fight and stop us getting out, when our plan was to come back with a Numenorean and free all the Dead in the mountain anyway.

To my amazement, this actually worked.   We walked out.

Where did we go next?  Oh yes, the Dwarven Fishing Village.   Actually, we'd barely sighted it when we realised that menacing looking ships were converging on it.  The Ice Orcs of Bergdelve were attacking!   To be honest, that would have been quite enough of a threat, but just when our heroic dwarf contingent had got the local Dwarf-fishermen organised, and we thought we had got the measure of the enemy, they brought up their secret weapon.

This was the storm-demon Fankil, an awesome and terrifying force of evil who had been one of Morgoth's first lieutenants.  He had hidden in these remote lands after the breaking of Utumno.  We are not quite sure why he chose to show himself at this time, but we suspect it was because certain members of the party attempted to harness the restless power of the Open Sea to deter the Ice Orcs, and got him all excited.

It was an awesome battle, although I have to admit, I have made a rather terrible picture of it. 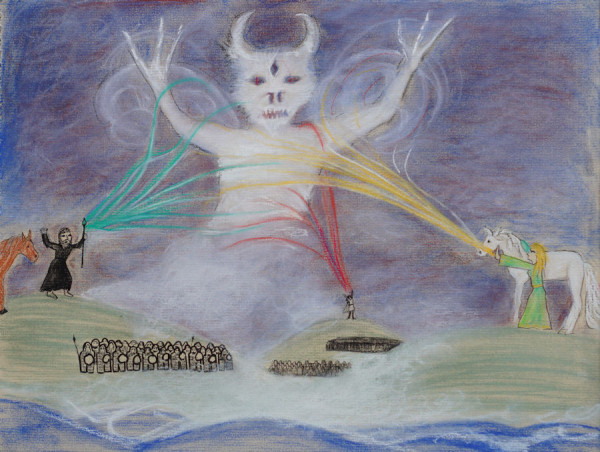 The troops in the foreground are the dwarves, standing firm against the terror of the Ice Orcs.   The little figure on the hill at the back is me.  Twice, Thingolodh and Sirithglor threw all their power (and hero points) at the great sky-demon, and twice he threw them back, quite untroubled with all that these heroes of Doriath and the Falas could summon.

Finally I threw in my (rather inadequate) fire magic to join the water spells, and tipped the balance: the demon fled.
I have to admit, I am a bit worried about where he may have fled *to*.  But there's no point fretting about that sort of thing, so, pausing only to teach the Nirnaeth Arnoediad song to the surviving dwarves of the fishing village  (they loved it!), we set off to the North.  We had heard rumours of a people called the Bead People who seemed to have strange powers for mere Children of Men.  They also had the ability to embed those powers in beads.  Mysterious.

So, yet more walking and eventually we came among the Bead people; and found they were a people ruled by a number of Matriarchs, advised by a Wise Girl.  The Wise Girl was accounted Wise, because she was too young to have become foolish yet. This seemed a nice twist, although given how ancient most of us were, it was also a tad disturbing.

Here, I was in my element.  The power of these people was bound up with the making of magical objects.  Magical objects are definitely My Area, as a smith of Celebrimbor, and maker of the Silver Hand of Maedhros.    It didn't take long to work out that there was something very wrong with the magic of the beads.  The Bead People themselves seemed pleasant enough, but their power was tainted with the Power of Morgoth!

They were, in fact, without any idea what they were doing, making beads from the broken and ground up sands made from the remnants of fallen Utumno, imbued with the faint yet terrible essence of Morgoth himself.

At this point, Sirithglor proved to us all that *some* of the Sindar are actually wiser than they are tall.   Talking to the Wise Girl of the Bead people, she compared philosophies and origin myths so artfully, and retold the tale of the Ainulindale with such clarity, that the Wise Girl was won over from her own religion, a twisted and confused form of Morgoth-worship.   She was won over to the cause of Truth, and undertook to win all her people over too!

This was a great triumph.  We had feared that the Bead people might be sunk in Morgoth-workship so much that we would be forced to slaughter them all.  I was surprised to discover that not putting people to the sword when they disagree with you could be so effective ;-)

Inspired by this great work, I resolved that I could do no less, and must leave the Bead People with sands of Utumno that were cleansed of the evil of Morgoth, but not the power they carried.   (  Morgoth, after all,  was always given a choice by the Valar, and Sauron too was not evil in the beginning.  So, logically, it made sense for it to be possible to de-evil the sand but leave it with the power to make magic beads.  Logic is useful in this sort of situation).

This was never going to be easy.    We had to use the artificing skill of the Dwarves, earth magic, water magic, and my fire magic pulling it all together, to remove the evil essence from the Beach of the Beadmakers, if not from the entire Bay of Lingering Shadows.   And we did it!   This cooperation lark has a great deal to be said for it.

( I need to note here that not only was the entire rich and fascinating Bead People culture entirely improvised on the spot because our group randomly set off in an unexpected direction, but Sirithglor's retelling of the Ainulindale and the entire philosophical debate was produced in full, entirely on the spot without any preparation on either side.  I was impressed.  )

... And no. I am still not finished. A lot happened! Next! >>
Tags: arty stuff, holidays, noldor, roleplaying, tolkien
Subscribe