Ost in Edhil in the evening 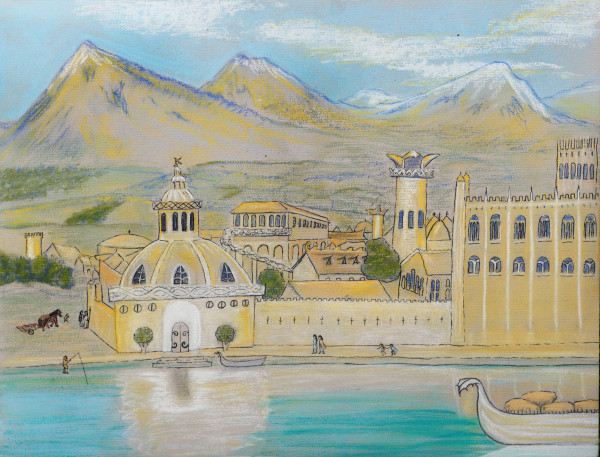 Capital of Eregion, the city of Celebrimbor, where Sirannon the Gate-stream of Khazad-dûm running down from the dwarf-city under the mountains met the river Glanduin.

Here Celebrimbor and his Gwaith-i-Mírdain, the People of the Jewelsmiths, made the Rings of Power.   On the left, a dwarf with a horse pulling a cart is arriving at the city to be greeted by the gate-guard.  Here and there around the city  and outside you can see the dark holly-trees that were the special sign of the Noldor of Eregion.

The city was not built for defence, so much as for beauty, craft and learning. When Sauron attacked Eregion,  demanding that the Rings of Power be surrendered to him, the city and its people could not hold out for long against the armies of the Orcs.

Much later, passing through the ruins, Legolas commented, "I hear the stones lament: deep they delved us, fair they wrought us, high they builded us; but they are gone. They are gone. They sought the Havens long ago."

Given what really happened to Eregion, one can only assume Legolas had suddenly had a meaningful stare directed at him about halfway through this paragraph, perhaps by Aragorn or Gandalf, and remembered the talk they had previously about The Things We Aren't Mentioning To the Hobbits Just Yet In Case They Panic.

Hoping I may have time to add another Eregion drawing for