I always forget to take photos / video of the process of introducing dogs to cats, and then wish I had later. Sod's law says that this will be the dog where the process doesn't actually work, but I've taken photos anyway.  Need to read manual to find out how to get video off the new camera, as it seems non-intuitive.

I brought Perdy down to practice ignoring cats while I made some coffee. I had cheese, so the other dogs turned up hopefully.  I must make some time to do more training with Rosie too, she loves 'winning' treats: this photo makes me feel bad because I was mostly shoving the cheese at Perdy.   The cats are in the room on the right through the open door, Perdy could see Henning if she turned her head. 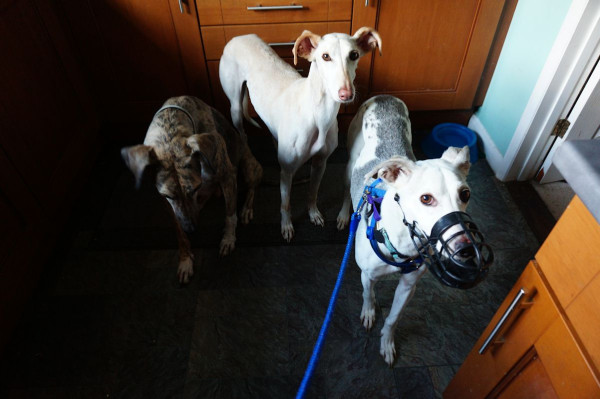 After a short while the other dogs got bored of the hard floor and went away, and Footie Cat started shouting.  Perdy became excited and shouted back. 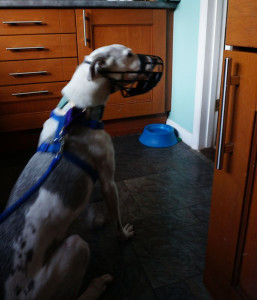 I don't think the idea that Perdy is an ex-working lurcher is very likely.  I can't imagine anyone hunting illegally with a dog that becomes so very loud and excited.  Even if her yodelling, squealing, and barking didn't alert a land-owner, you'd only have  a hope of catching animals that were STONE DEAF.  And anyway, her body language is nothing like, say Brythen or Rosie going after a a rabbit: focussed and silent.  She wags like mad and jumps up and down squeaking, then gets frustrated and starts to bark.

However!  I did manage to get her attention back on me with cheese.  This is a big step forward, yesterday I was trying to post roast beef into her muzzle and she was just dropping it on the floor because she could not focus on anything but CAT. 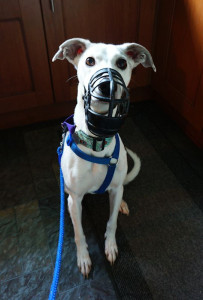 We tried going into the room with the cats. For a while things went well.  (Also, Rosie's pose makes me laugh!)   But then Footie Cat, who is old and deaf and possibly a bit senile, came storming up yelling for food, attention etc, and I had to pull her away and go and hide in the utility room.  Footie loves dogs, and I am not sure he can actually hear Perdy  barking very well, whereas the sound of Footie shouting definitely gets Perdy very wound up. 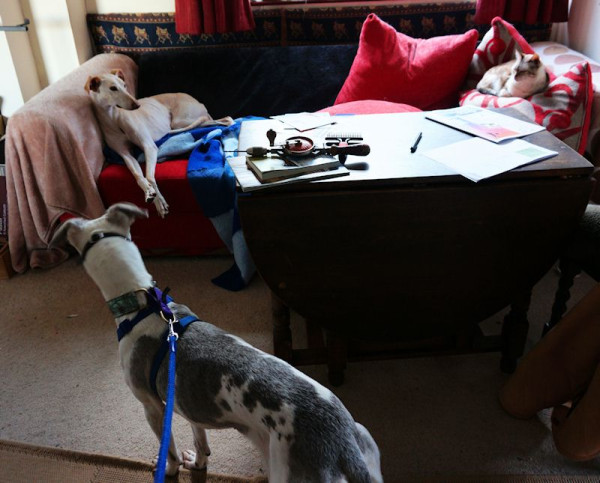 I probably went on with this session too long, and didn't fling quite enough cheese at her,  because I was taking photos and not concentrating completely on Perdy.

She was stressed when I brought her back to her own space.  I know she looks happy here, but check out the whites of her eyes and the way she's holding her ears back.  She was feeling a tad manic and she sat there in her crate with no cats anywhere and barked at me randomly for no reason I could see, except that everything had just got too much for her. 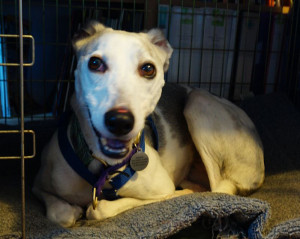 Thankfully no permanent damage seemed to have been done, ten minutes or so later she was much more relaxed. 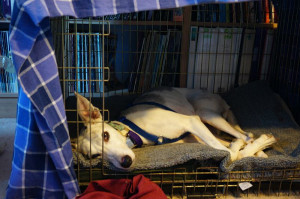 She had a little play with Brythen before our evening walk.  It was encouraging to see them playing with a toy together and although there was a certain amount of play-snarlying, they shared it very nicely, passing from one to the other several times.  No photo of that because the light had gone, but here is PP with Perdy on a long lead enjoying a little running at sunset. 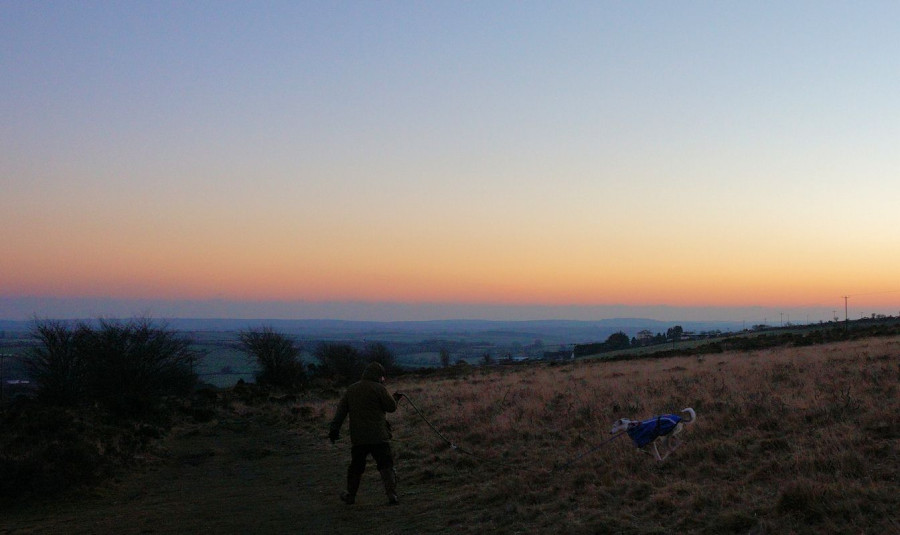 I am hoping that if she gets plenty of chances for sniffing and poking her nose down holes after rabbits, it may make the cats seem less frustrating.    As so often with fosters, I suspect she probably hasn't had as much exercise as she could ideally use, although she seems fit enough (and pulls on the lead with surprising force for a fairly small dog).
Tags: behaviour, dog training, dogs, foster, lurchers, project dog
Subscribe