Sighthound crossed with... well we're pretty sure it's SOME kind of a dog....

First, just in case anyone doesn't know what he looks like (I am aware that is unlikely for anyone who has visited here more than very briefly...)  here is Brythen just after I adopted him in March 2012.  Spot the gangly legs and huge puppy-feet. 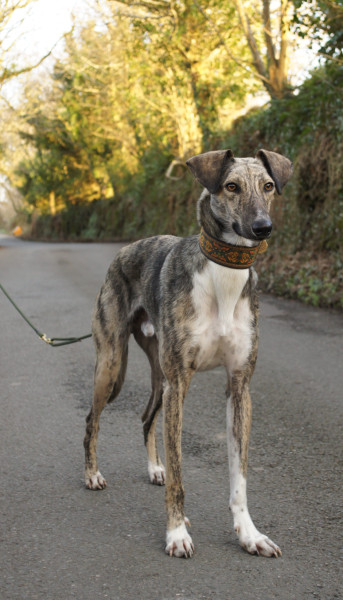 And here he is in October 2014, several kilos heavier and noticeably more relaxed (and spotty.  All the white hair on his chest fell out) . Guesses on the mix of dogs composing a Brythen have been many.  They have usually included greyhound, sometimes saluki but also, particularly as he got chunkier,  staffordshire bull terrier, pointer, or even mastiff.    He's definitely more robustly built than a greyhound, and he has a remarkable Teflon coat, rather stiffer to the touch than a greyhound's, that allows him to run through brush and bramble and come out unscratched.

Of course, all the guesses have been based on the outside of the dog, which is a tiny percentage of the overall animal when you think about it.  Nobody has remarked on his pancreas, or his liver, or how typical his salivary glands are of any breed.   I'm not forgetting that the closest living relative of the elephant looks like this: 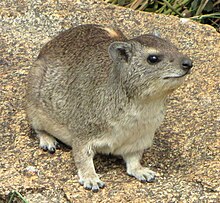 Just after Christmas, I twiddled inside his mouth with the special plastic brush thing that the Wisdom Panel genetic testing people sent, and posted it off to the lab to be tested.  Today it came back: 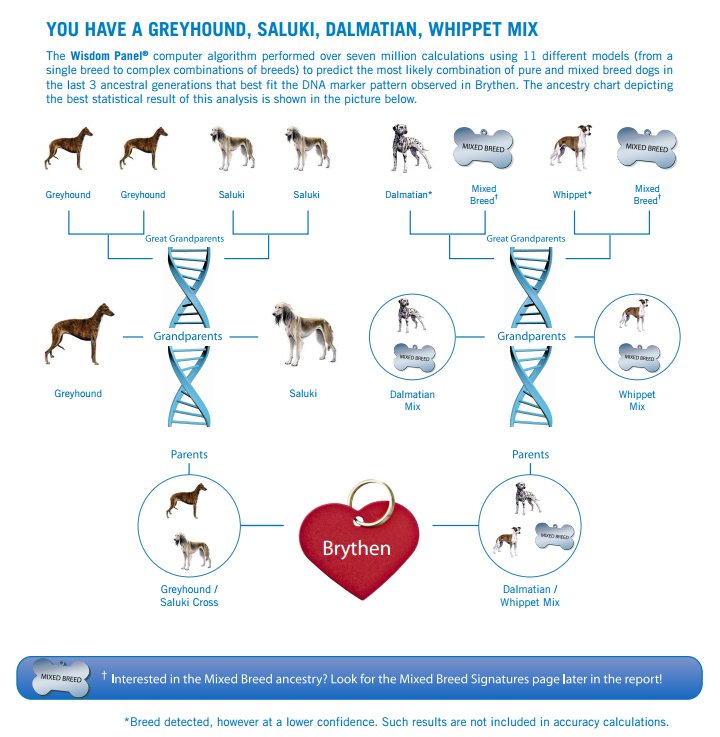 Well, we'd guessed the greyhound!   He looks greyhound, and he has a greyhound's poor tolerance of heat and relatively poor stamina. That there was as much saluki as greyhound was a bit of a surprise, although it does make some sense given that salukis are famed for their independent natures and erratic recall.   Brythen's recall has often been noticeably erratic!

Despite the resemblance in shape, greyhounds are a British breed, related to the herding dogs and later adapted for short-burst hunting and racing -  whereas the saluki is a more specialist and primitive hunting dog from the Middle East and North Africa.   So I'm reasonably confident when they say 'saluki and greyhound' in this report that it probably is possible to identify saluki and greyhound from one another and from other dogs.

What about the other side though?  Dalmatian and whippet and a pair of mutts!  They are less confident about this side (see the asterisks)  and it looks like Brythen does indeed have some ancestors who are Just Dogs, as I had suspected.    Whippet is not unexpected - whippets were originally bred largely by mixing greyhounds with terriers, so I guess that could either be a real whippet great-grandfather, or maybe some lurchery thing that is kind of vaguely terrier and kind of vaguely greyhound.  But Dalmatian!  I had not guessed at that at all.

The Dalmatian seems to be the only dog named that fits the more-chunky profile that suggested he might be a bull breed cross, and his funny big ears could be a bit Dalmatiany.  And he does have that spotty tum.  It just goes to show that very superficial characteristics like colour really influence how you see an animal: if he were black and white, I'm sure lots of people would have guessed at Dalmatian but because he is brindle, I think we tended to go for the dogs that naturally come in brown or brindle in their guesses.   As Dalmatians are relatively unusual dogs and have had a closed stud book for quite a long time, genes indicating Dalmatian should be a bit more distinctive than those indicating, say, whippet or Jack Russell terrier.

But how odd to breed a lurcher from a Dalmatian!  Actually, I'm not sure if that even does make him a lurcher.   Technically, a lurcher is supposed to be a running dog created by crossing a sighthound with a 'working' dog.   I don't think Dalmatians are classed as working dogs, whippets are sighthounds, and great-grand-ma Mutt and great-grand-pa Mongrel aren't classed as anything.

I don't know much about Dalmatians, but I do associate them with being a bit dippy. So that fits!  I shall feel less guilty now about Brythen being unenthusiatic about training.  A dog that is part-Saluki, and part-Dalmatian seems like a good candidate to end up a bit of a wazzock, frankly.

There was another page that attempted to narrow down the mixed breed side of things : 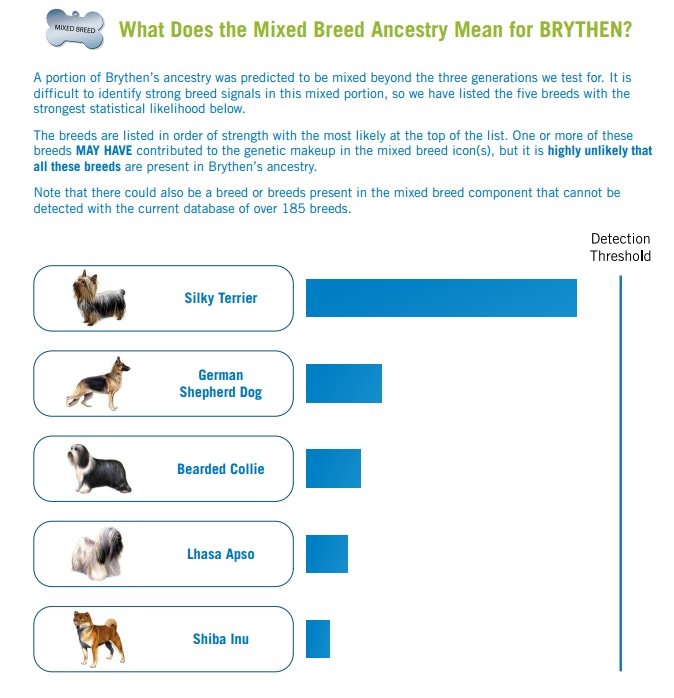 Silky terrier!  Not as such, I suspect.  The silky terrier is an Australian breed, which seems to have been bred from whatever small terrier-type dogs the British took with with them to Australia, with a good helping of what is now the Yorkshire terrier.   So I'm guessing that at least one of the mystery great-grandparents was some sort of vaguely terrier-ish dog that nobody had ever stuck a breed label onto,  but which was descended from dogs related to the ancestors of the dogs that would eventually be bred into the Silky terrier.

I can believe there might be a little German Shepherd in there (not in the brain though.  Maybe in the stomach, he has a delicate tum!) , and perhaps some sort of British herding dog, maybe even a bearded one.  I believe the genes for longer coats tends to be recessive.  But more likely again, these are resemblences that come from being a British dog with a largely European ancestry, rather than actual relations that are pedigreed GSDs or Beardies.

i think the Lhasa and Shiba are probably false matches, given that these are exotic oriental breeds and the degree of confidence is very low too.

Well, that was all very entertaining, and I'm generally pleased with the results.

Oh!  I forgot to mention that Pp had a dream about the result of this test.  In his dream he learned that Brythen was 56% 'Fast' (about right, given that he is half saluki x greyhound!) and just 6% 'Good'.   I am blaming the Dalmatian for that.  :-D 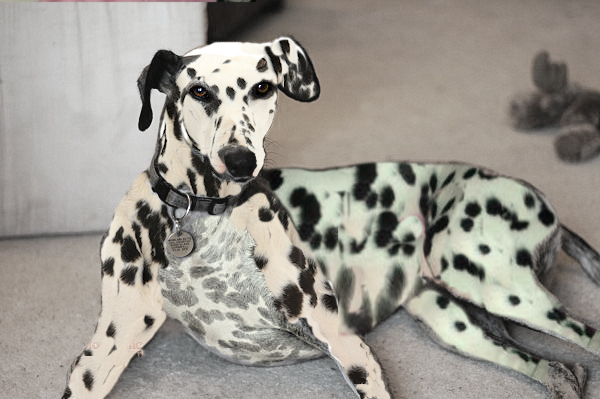