I understand that the rest of the country is a bit wet and blowy, but it's quite pleasant here.    Still trying to get ALL THE WORK done (to the point where I've started doing other work as a form of procrastination from the work I should be doing, apparently?  Madness...)   Anyway, I went to bed late, got up early and then eventually Rosie Roo persuaded me that she really really did need to go out, so we did. (Brythen rarely tries to persuade me to take him out, he just waits until I do.  He is such a good boy).

Here is Brythen posing by the Tamar.  What a handsome dog he is. 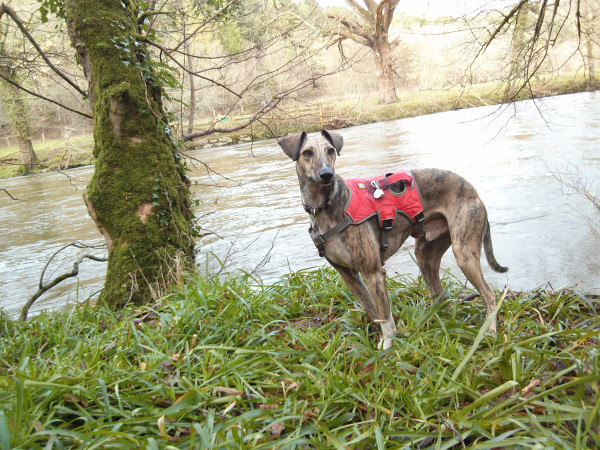 To my delight, I got a Dog Gene Test from PP for Christmas, which I am rather excited about.   It remains to be seen if genetics can detect anything more specific about Brythen's ancestry than Generic Dog X Dog.

Going out took a long time because I'd forgotten to eat anything but toast so I ran out of oomphs half-way around and had to slow to a crawl.  Also this photo was taken shortly before Brythen vanished briefly and came back without his bell.  On the plus side, he did come back very quickly, and Rosie Roo stuck with me the whole time, and I am rather hopeful that after a two and a half hour walk, they may let me off going out again this evening.
Tags: dogs, walks
Subscribe