Holiday in the Spinward Marches

Warning: the creator of this entry is virus-infested.  Expect more than usual numbers of non-sequiturs and typos.

Last week - well. almost two weeks ago now -  we spent a week in the Spinward Marches of the galaxy - with occasional forays across the border into Vargr space.
Having previously acquired a spaceship of slightly dubious provenance,  we visited the water-world of Heguz where two huge floating colonies had vanished, one after the other, and a third colony was hovering nervously in orbit, trying to decide whether it was safe to land, or if giant waves or huge tentacles might lie in wait. 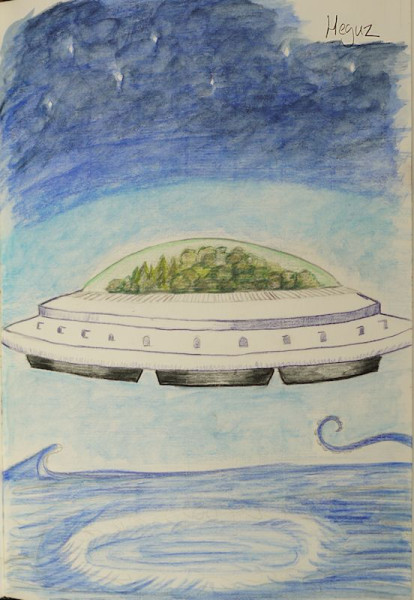 We landed on Nasemin - not quite a complete waterworld, but still a mostly-ocean world, studded with odd little volcanic islands here and there.  I decided that it was really a rather stormy version of the Caribbean. 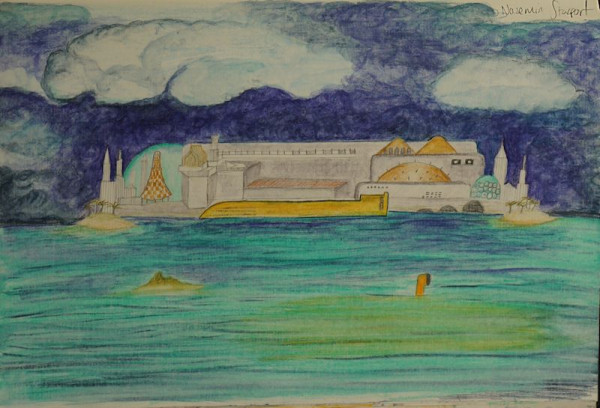 The Caribbean aspects were greatly enhanced by the presence of the Vargr corsair Yellowbeard, who had a serious Pirates of the Caribbean fetish, despite being a genetically-engineered canoid. With terrible taste in starship decor: that green and pink... oh dear. 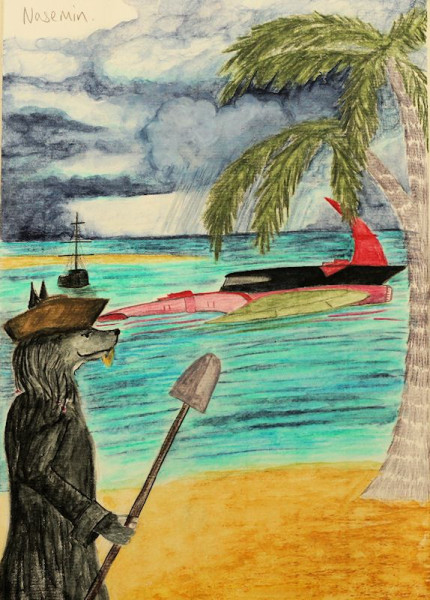 There was fighty stuff with Yellowbeard, who turned out to be the official Nemesis of another of our party, Thermistocles Namet, the Hammer of the Vargr.  But not very much because our party are not talented in the fighty department.

Things went badly for Yellowbeard after a while, and his lovely sailing ship got blown sky high.  (I was a bit disappointed with my drawing of this in pencils so I've fiddled with it on the computer too, hence the slightly odd textures). 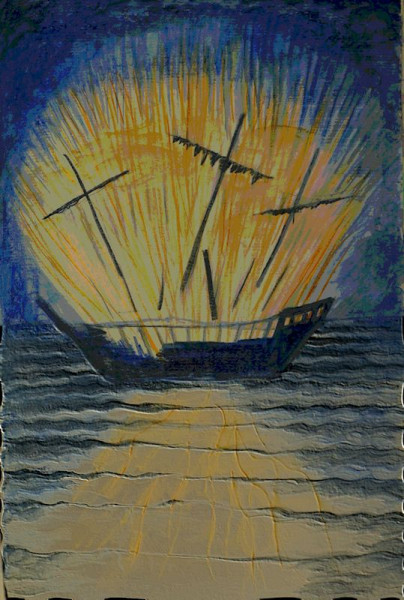 Yellowbeard had not just come to Nasemin to prance about in his galleon.  He was on the trail of a secret undercover base of the illegal Solomani Ascendant group.  These were people who believed that genetically improving humans from Earth was the ideal route to creating a superbeing.   We invaded their base and took four people in lab-coats prisoner.   Two of the party were charged with securing them, which somehow resulted in four scientists being stripped naked and duct-taped together in a toilet.

Much discussion ensued as to exactly how to duct tape them, and whether to remove their underwear.  This led into a discussion of whether they might be wearing Secret Escape Knickers which might enable them to get away.  And of course the required features which might be useful in secret escape knickers. 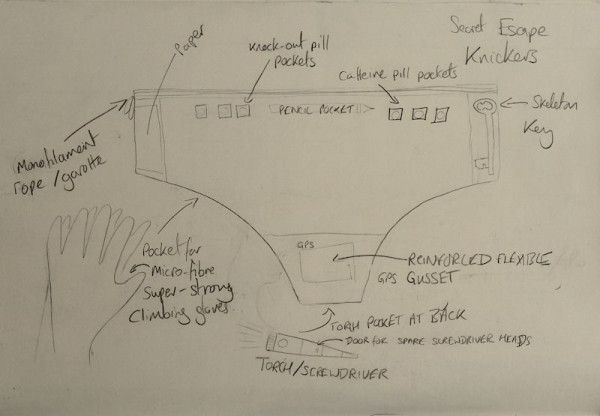 We were almost feeling sorry for the evil scientists, when we discovered what they had been up to in their Secret Base with a small girl aged 8: 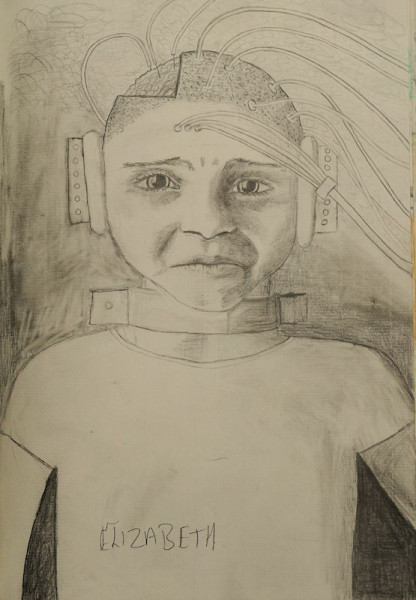 Quite pleased with that drawing technically, but it's... disturbing.  I had to draw a happy one later to make up for it.

Being a party of relentlessly childfree people, we tried hard to drop her off in the care of some local authority, but she wouldn't have it. Which led to the odd spectacle of a party of brave adventurers, spanning three species and five planets,  solemnly interviewing six nannies.   In the end we recruited not just Elizabeth, and a nanny - but two suitably-aged friends for Elizabeth too.  It's a good thing our spaceship was well equipped with spare bedrooms.

I think it was at this point that someone checked back on the duct-taped, toilet-imprisoned scientists, and found that even without knickers, they had managed to escape their humiliation in the most permanent manner, by taking the cyanide pills embedded in their teeth.

We took Elizabeth to see the amazing Extruded Foam Metal Towers of Pandrin. Obviously tht thing to do there is the classic 'holding up the towers' pose. 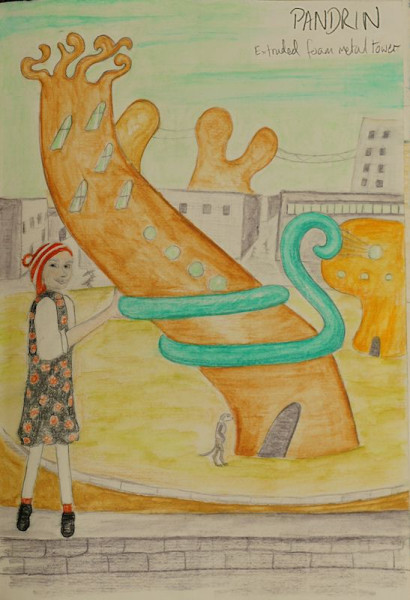 And after that things get a bit confused in my head because around this time I came down with the Cold from Hell and started staring blankly into space while sniffling pathetically and sleeping a lot.   I do remember there was a Battle of the Bands, and that we picked up a Vargr prizefighter and engineered the start of his career in a series of terrible B-Movies.  He was called Zular. 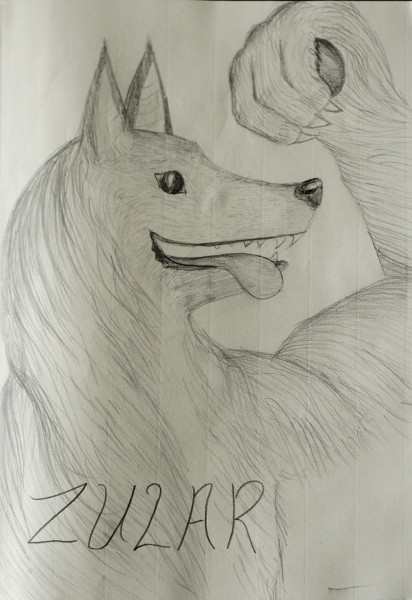 We discovered that the planet of Pandrin was going to be crashed into by a Giant Terrifying Asteroid.  Even more terrifying, when we examined the asteroid, we found it was the forgotten ice-entombed spaceship of some Very Scary Aliens.  Fortunately they were all dead and we sent their asteroid-ship into a stable orbit.
There was a medal ceremony!  We were heroes. 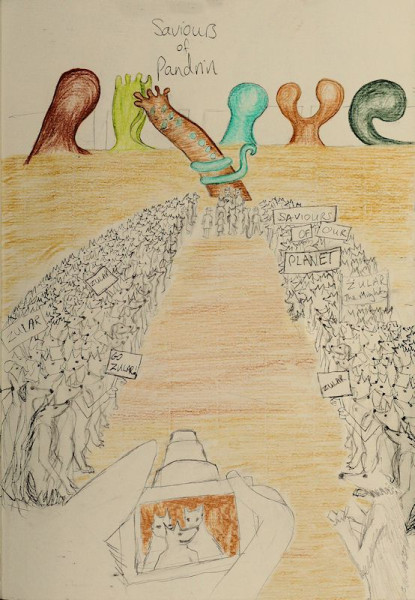 Note to self@ do not draw medal ceremonies.  All the little faces are way too timeconsuming.   I got bored with this one and ended up cloning a lot of it on the computer.

LoA wrote up her version here. It's marginally more coherent, but much less illustrated, but I link it here really in the hope that whenever we happen to return to this universe I can refresh my memory of what happened.
Tags: holidays, roleplaying
Subscribe