Was in a medieval mood today, so we went to Cotehele house for an outing.  Here is my mum, demonstrating doorways designed for seriously short people only.  This would probably be more helpful if I could remember how tall my mother is. 5'1-ish ? Less?  Considerably Shorter Than Me, anyway. 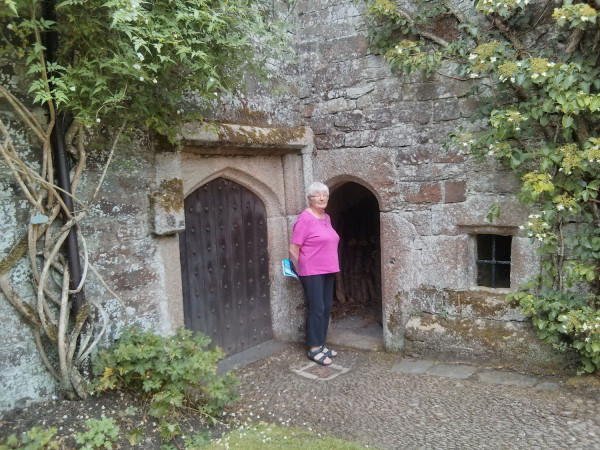 This morning as I was returning with the hounds from a morning walk (thankfully, much cooler today than it has been: Oh! the humidity!)  I was accosted by a woman waving the implement whose name causes controversy.  Some call it a fish-slice, others, a spatula, and I think last time we debated this matter there were other suggestions too.  The thing you use to turn stuff in a frying-pan so it browns on both sides.  Anyway...

A tall, grey-haired lady, slim and jeans-clad,  with intelligent aquiline features,  approached me, waving this utensil.
"Is this yours?" she said.
Somewhat baffled and for some reason, feeling rather guilty, I examined the item, and was relieved to see that it was unfamiliar.  At least, whatever the dogs, cats, etc may do, the kitchen equipment is not out annoying the neighbours.
"No!" I said
"I found it in the garden.  We often find things in the garden.  Something brings them.  I think perhaps it was from a barbecue," and she looked at me hopefully.
I admitted that it did indeed look like the kind of thing that someone might use if barbecueing.

"The thing is... I've lost a shoe," she went on.  "You haven't seen a shoe..?  A trainer kind of shoe?"
I shook my head in bafflement.
"Sometimes it brings things, and sometimes it takes them away.  I'm hoping that if I can find where this came from, I might find my shoe."
I assured her that I would look out for her shoe, and if I found it, I would return it to her house pronto.
And she went off up the lane, fish slice in hand, looking for her shoe.

Honestly, this really happened.  I assume, possibly, a fox at work?  All the other explanations seem even less likely.