Rosie seems to be settling in nicely.  Her doggy manners out and about need some work.  She does have a tendency to greet new dogs with cries of GRRRR, but generally gets on with them well once she has been introduced.  One could not hope for a politer dog in the house.    I'm leaving it till I have Helga Saab serviced next week before I make the final decision to adopt her, though.  Dogs are expensive to run, and it would be daft to adopt another dog if Helga turns out to have some vastly expensive problem.  *wears sensible hat, somewhat unconvincingly* Az is a bit bony to make a good pillow, but it's nice that she likes him so much. 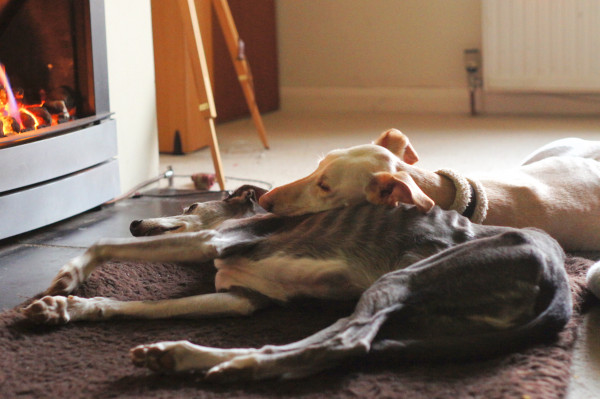 Brythen would love there to be more of this sort of thing, but most of the time she prefers snoozing. I made them go outside with no clothes on.  They were not happy.  Az was down by the gate while I took this, patiently waiting for me to take him for a walk, despite his many bones and wobbly legs.   But the young dogs, who are both wusses with baldy tummies, are queueing to get back into the house and cram themselves next to the fire.   (I relented and put their coats on before I took them out) I did some hedgelaying today!  Now you can see out to the valley.
But the alarming thing about this photo is that these hazel stems have catkins on!   In mid-December!
It's very mild out there (no matter what baldy-tum lurchers tell you) 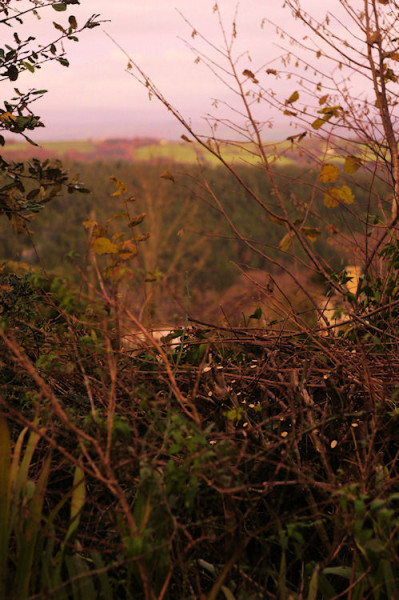 It was a beautiful day today, and the sky as the sun went down was all dotted with fluffy pink clouds, with that strange December light that is like an old oil painting.
Tags: dogs, garden, hedges
Subscribe