I had said that I wasn't going to foster any more dogs while we still had Az, because he is so old and frail now and I didn't want to risk introducing any dogs he can't cope with.  But...

... then I saw an appeal for a new foster home for a Lurcherlink rescue dog who had been in a home, but had been returned after two years to her fosterer - who, in the meanwhile had had a job change, and therefore was finding it hard to look after her.  So, she wasn't likely to be carrying any nasty bugs from having been in a stray pound, was living not far away, and I was able to get a pretty full idea of what sort of dog she was from the fosterer.  It seemed worth a try.  So, the fosterer brought her over yesterday to meet my dogs and see how they got on. 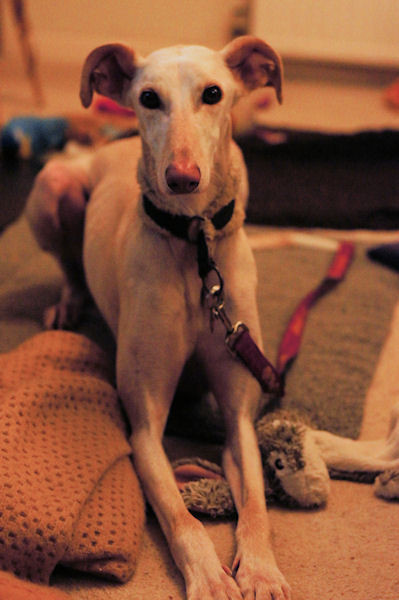 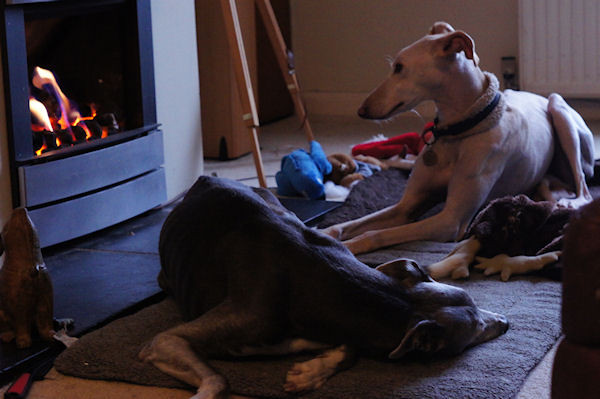 I think I can say that Az likes her.  In fact, Az likes her so much that shortly after she arrived, he ate a tin and a half of dog food and a big bowl of stew.   Given that I've been coaxing food into him quite often in single teaspoons for some weeks, this is excellent.   Brythen thinks it would be nice to play with her, and she's not quite at the wanting to play stage.  She would, I think, like to snuggle up to Brythen ( she has very little fur and a great love of snuggling!) but he's not quite sure that he wants to do that.  Brythen likes a bit of personal space when he's sleeping, with no blonde floozies involved!

She likes the cats.  I'm not sure that they like her, exactly - but they seem prepared to accept her (well, Henning did give her a clout earlier.  But she just ran away rather than retaliating, so that's probably quite healthy.)

Her rescue name is Annie, but that's a bit close to my sister's name, so I am calling her Rosie, for her pink nose and bald pink tummy. She seems to be picking the name up already: she's quite bright - I think she's mostly saluki and whippet.

The people who adopted her two years ago failed on the dog walking front.  They had horses, so they turned her out in the field with the horses, and called that a walk, with the result that she started occasionally taking herself for walks, and is now rather grumbly and insecure meeting new dogs, so I am going to be working hard on the social skills to help her get her confidence back.  Clearly she's not too bad, given how well she has settled with my two, but she could definitely use more practice.  She was also several kilos underweight and starving hungry when she arrived back with her original fosterer, which must have been really upsetting for the poor man.  You assume when dogs go off to their homes that they are going to a happy ever after, it's depressing to think that someone would adopt a rescue dog and not even bother to feed her enough.

By a bizarre coincidence, her original fosterer turns out to have been the dog warden who originally picked Brythen up as a stray, two years ago (he didn't remember him on sight!  But he happened to mention that he was a dog warden covering that area, and when I asked, remembered that he had picked up a pair of brindle lurchers, one male, one female - that had gone to the rescue Brythen came from, at about the right time of year.  So somewhere out there there is a female Brythen!  I wonder if she's as gormless as he is :-D )
Tags: dogs, foster, lurcher
Subscribe