Buckland Abbey is Sir Frances Drake's old pad.  Well, it was a Cistercian monastery first, then it belonged to the Grenvilles, then they sold it to Drake. Eventually it ended up with the National Trust, who decided this weekend, they would have a Shakespeare festival and do Elizabethan Things.  It was terrifyingly hot today (32 degrees!)  but there were trees and things to hide under. And it was all free!  Well, free if you are a National Trust member anyway.
My mum inspects some heritage roses.   I'm sure I've got these same roses in my garden and I can't remember for anything what they are called now.  They have a great scent though they are not a very tidy shape. 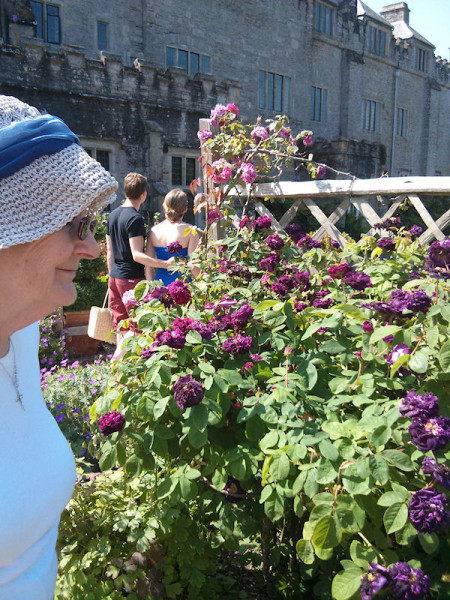 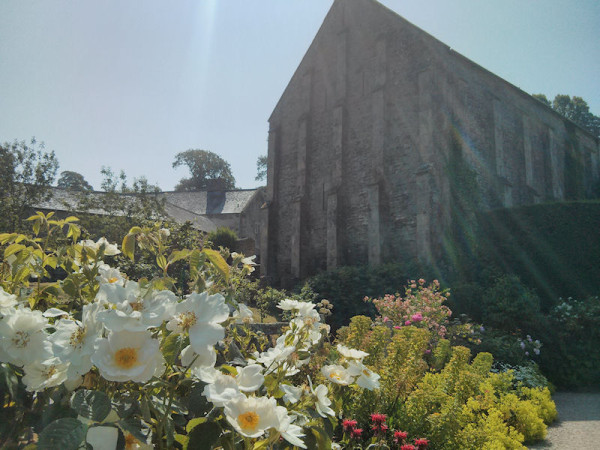 There were some Tudor dancing people.  I was wearing about 85% fewer clothes than them, standing in the shade and eating icecream, and I was hot.  How these people didn't simply boil to death, I can't imagine. 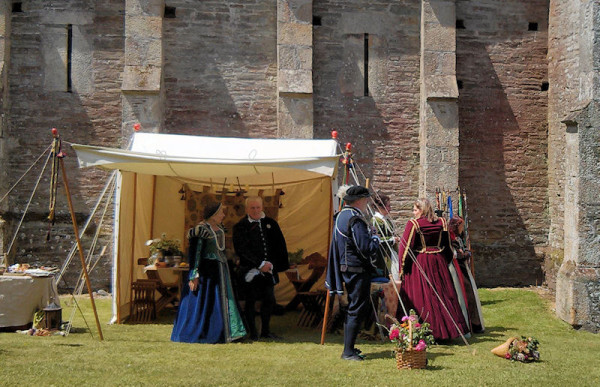 Prospero and Caliban try gamely to pretend that a a tempest is raging, surrounded by lounging tourists.

I did take a couple more photos of the play but I only had my phone camera, and it was a big space (and we were lurking in a corner in the shade...).

The actors were in full sun, and yet somehow managed to leap about in an exhausting-looking manner.    They were impressively audible too, specially the girl playing Miranda.   My Mum was slightly worried by the fact that the whole cast, including the King of Naples and his son, were in their teens or early 20s.  I can't say it troubled me.  The King of Naples and his son did seem a tad interchangeable, but Prospero did a great job of appearing older than he really was, and had a faint but pleasing suggestion of Ewan Mcgregor doing Obi-wan Kenobi about him.  Trinculo and Stephano were particularly good in their drunken scenes too.  Acting to a scattered audience in such a big space must be quite hard but they pulled it off well.

More incredibly-clothed Tudor dancers outside the Cistercians' Great Barn.   It is a Great Barn too - it's medieval rather than Elizabethan and it is *fecking enormous*.  This is just one end of it. 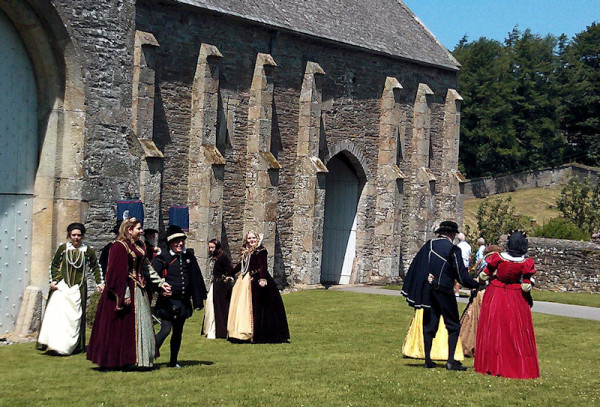 And for some reason there were sheep made of wire mesh here.  I like the way the one at the front looks very quizzical: Why AM I here? it is thinking. Why am I made of wire mesh?  What is all of this about? 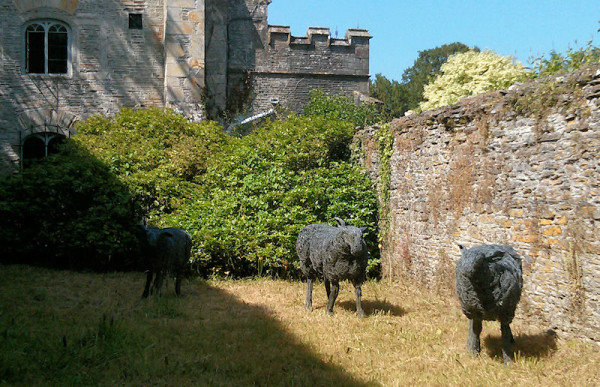 I was so exhausted by all the sitting in the shade eating icecream, spectating and gently chatting, that I went home and fell asleep for about 3 hours.  The cast of 'The Tempest', on the other hand, were giving a spectacular display of Tudor duelling as we left - before going straight into ' A Midsummer Night's Dream' that afternoon.  Was I EVER that young, and that energetic...? Whew.  Oh, this was the company. Would definitely go to see again, although I am not sure I am up to watching four plays in a weekend.
Tags: devon, holidays, theatre
Subscribe