I have bought Brythen some falconry bells. The idea is that if he does decide to disappear, he will at least be audible at a distance. At the moment he is working very hard on his ability to tiptoe along not jingling, and if he does run full out, he seems to think the bells are chasing him, which is comical but a bit woeful at the same time.   But I am hoping that he will get used to them.  With the bells and the red harness, he is at least easy to spot, although undeniably also a suggestion of the unseasonably festive about him.

He is becoming less and less likely to just disappear completely - although he still isn't sticking to my side like glue, he's MUCH better about coming back when called.  It's been some time since he tore anything to shreds - well, other than dog toys.  And even the dog toys are lasting longer.  I bought him an Iggle Piggle off a charity stall a week ago or more, and although it has been comprehensively loved and carried around the garden - it still has all its stuffing! Could it be that the Big Puppy is finally becoming a dog?

I noticed today that his eyes have changed colour.  They used to be more or less amber-golden, but they have developed a darker brown colour.  Pity, I liked the golden eyes.  Still, I'll swap golden eyes for a dog that comes when called. 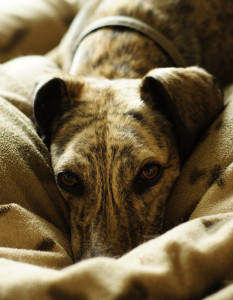 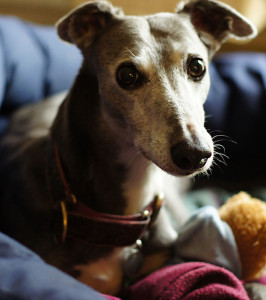 Az has been having a wobbly few days. He has been off his food, and then he met a pair of over-emphatic dalmatians who knocked him rudely over on his back, which is really not at all good for such an elderly gentleman.  It hit him rather hard.  He had to have a duvet day (much to his disgust, he hates missing walks) and he still seems to be getting the odd twinge in his neck.

I am walking him in Brythen's spare harness (way too big but just about fits if I tighten all the buckles to the smallest setting) because I don't want to risk having to put any weight on his neck with a collar.  He seems to be gradually getting his confidence back - feeling a lot more cheery today and even chased a bunny.   (In photo above, he looks absolutely desolate, but in fact he is just trying to communicate his extreme desire for dried tripe, and get across the important message that I should immediately put down my camera and go and get a big pile of stinky tripe instead...)  I've moved him onto Lily's Kitchen tinned dog food, which appears to be made primarily of pure gold, judging by the price.  BUT he will eat it, and that's easier than cooking casserole for three meals every day.
Tags: dog training, dogs, lurcher
Subscribe