Yesterday my laptop decided that after living in harmony with Kaspersky Antivirus for ooh, at least two years, it could live with it NO MORE and would Blue Screen of Death repeatedly until the offending software was taken away.   I have fingers crossed that the tantrum is now over, and a long and peaceful relationship with Bitdefender instead lies ahead.

In other gadget news, I finally, reluctantly,  decided that yes, I probably should have a smartphone.  I've had several meetings recently where it would just be so handy to have access to email, calendar, and Google Analytics.   Plus, people look oddly at you if you make websites and don't have one,  and it's useful to have another gadget right here to test on.   I bought a Google Nexus 4.  Don't ask me why that one, I get very confused by the confusopoly that is mobile phones.  I think I had a reason, but can't entirely remember what it was now.   Maybe because it has a good camera. I like cameras.

I still have a fundamental grouchy philosophical objection to being in constant contact with a world that thinks it should be able to be in constant contact with me.     And I'm going to try to avoid using it as a one eye, one thumb person who engages in online conversation using 1/5th of the brain, while at the same time failing to converse with actual live human beings, because that's very, very irritating.  Probably I will fail at this resolution (I'm pretty sure I've already failed at it via the laptop...) and I'm a bit worried it will make my internet addiction problems worse.  I'm still not sure I actually *like* the internet. :-/
In conclusion, here are some untechnological primroses. 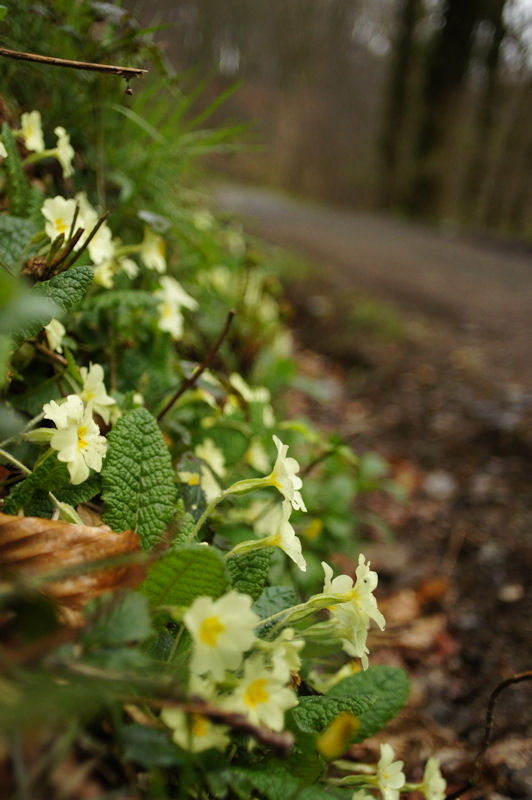 ETA : apparently this post annoyed Phil, Prince of Insufficient Light, who darned me to heck for complaining about being able to communicate with the outside world by sending my car a puncture, so that I would be forced to use my mobile to summon assistance (I'm afraid changing tyres that have been put on with one of those powered wrench things is not something I feel likely to succeed at). It was not just a puncture, but a puncture to the one of the two back tyres that didn't need replacing anyway, too! Grrrrr.