I read 'Bonnie Dundee' (and was a little surprised to discover about halfway through that I'd read it before.)  It's a story with likeable protagonists and an interesting plot, though I think the shape of the plot was sometimes just a little disconnected - or perhaps that's not the plot, it's the period of history in which the story is set, with nobody really seeming to achieve very much but a great deal of galloping about and posing dramatically on horseback. against stunning landscapes.

There was a particular scene that I decided I wanted to have a go at painting: 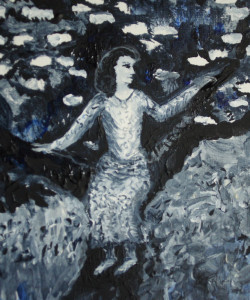 "It was a soft heavy-scented gloaming, and when I looked back I could see the taper light apricot in the windows... and when I looked forward again the cream curds of elder-blossom were beginning to shine to themselves among the dark of their leaves, in the way of pale flowers at dusk. But when I came down the bank, there was someone, something, sitting there already in the crotch where the two limbs parted. A girl in a gown that was pale almost as the elder flowers, and yet seemed made of webbed and dappled shadows.

For an instant my heart lurched within me for was it not Midsummer's Eve and the tree an eldern tree...

Then I saw that it was Darklis, wearing a gown of print stuff with little flower sprigs all over the whiteness of it..." 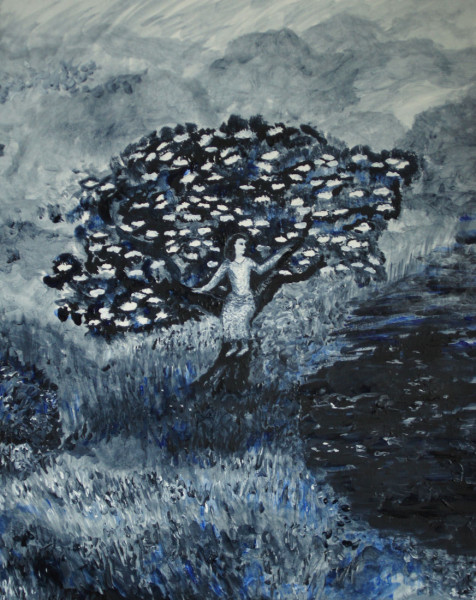 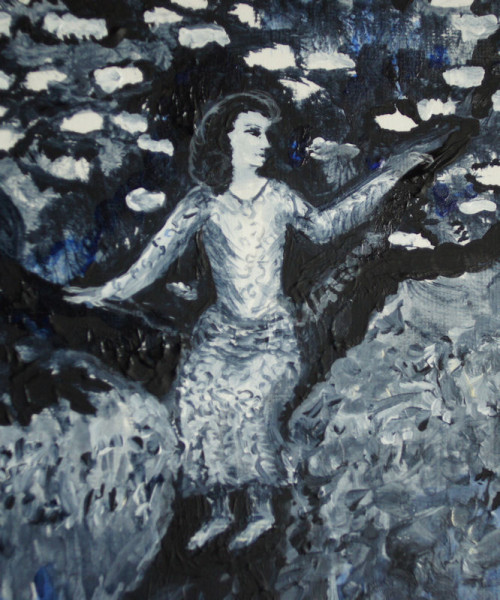 I am *fairly* pleased with it - it's not quite right (any help with working out *why* it's not quite right gratefully accepted).  I think part of the problem may be that it is an *elder* tree, and elders don't usually get big enough to sit in several feet from the ground.  But that said, my mental image of it from the passage didn't have that problem, so perhaps I just didn't draw it quite right.  I think the dress and hair are about right for the 17th century but again, tell me if I'm wrong.

I'll also admit now to the two stories I wrote for

sutcliff_swap :
1) A Singing Magic - about Flavia, from the Lantern Bearers
2) With a Strange Majesty - old Aquila falls at the battle of Badon Hill. Lantern Bearers retrospective from a Sword at Sunset viewpoint.

It took me aaages to write the first one, and I was filled with dilemmas - how to explain Flavia's decision to stay with her husband, how she knew how to brew drugs to knock the guards out, why she didn't escape before when she had supplies and equipment to help Aquila do so, how she might change as a result of her experiences,  what personality to give her husband, who had no canon name and was described only as a 'laughing giant', and of course, the most vital question of all : where she gets her dog from. :-D

And then the second story just rushed up and seized me unexpectedly by the brain.  I wrote it in a tremendous rush, and alas! I suspect it is actually better than the first one.  I did almost no research for it, apart from doing some poring over maps of the White Horse Vale to try to work out where the landmarks mentioned are.

I could see where the British forces were stationed at Uffington hill fort, but I was a bit baffled by where she thought Caer Berywen, the other fort she places at the other end of the British lines was,  or indeed why the Saxons didn't just go on West past the White Horse Vale and turn South somewhere around Swindon instead.  But White Horse Vale is such a great location for the Battle of Badon Hill I think I can forgive her taking a few liberties with the geography.

demon_rum and The Captain, who are both apparently minor rain deities, came to visit with their clouds.  We took them to a beach, where it rained a lot, and Yogi Lurcher enjoyed herself enormously (and the rest of us, a little less).  Then we took them to Plymouth,  where the clouds rolled away for a short while, so we (and all three dogs) ate pasties.  Also eating pasties were Francis Drake and his wife. 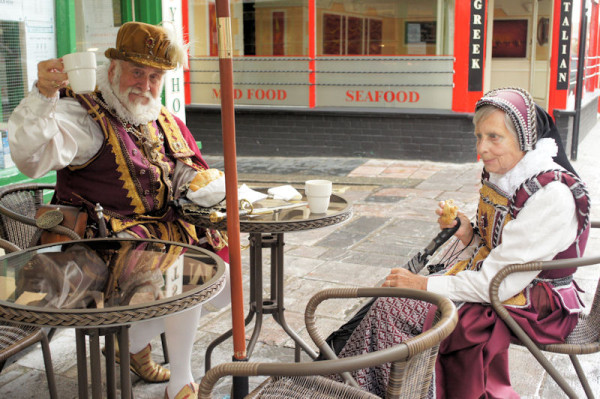 I asked them if I could take a photo and if they were dressed up for a special event, and they kindly gave me permission to do so, and said, no, it wasn't a special event, they just felt that Drake and his wife fitted in well in Plymouth. I felt this was a thoroughly splendid reason to be dressed in white tights.  We saw them again later, sitting under the walls of the Citadel and looking out to sea.

Presumably watching out for Armadas. 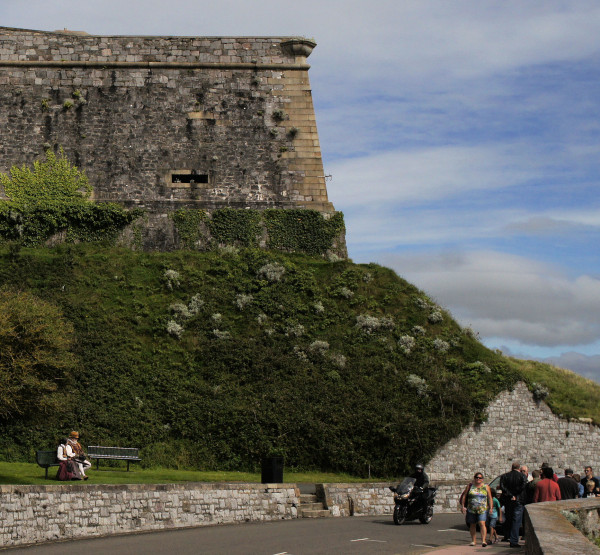