Becoming bored with getting soaked and other things


Set off to walk the hounds this morning in brilliant sunshine under blue skies, came home soaked right through to the pants.  This also happened yesterday, although at least today we did not find ourselves on the wrong side of a rambunctious gang of heifers intent on dog-trampling to take their minds off the rain, and have to make a big damp detour to get back to the car.   Really should learn from this and start wearing my big waterproof coat.  Or at least carrying a brolly.

The whortleberries are not doing at all well with all the wet (I think it may favour other things that grow up and overshadow them).  Alas, no whortleberry jam this year.  But the honeysuckle is spectacular, filling the trees with gold and white blossom.  Clearly honeysuckle feels that wetter is better.

Big puppy Brythen does not like rain.  He really, really does not like rain.   As a result, he is spending much of his time indoors, finding things to destroy.  I restuffed Bernie the Banana and Big Tiger this morning and their insides are already strewn across the living room again. He has also popped

philmophlegm's huge inflatable dalek, and today he stole an old PS2 game guitar and chewed the strap and the cable into little bits.  He also likes to carry the dog beds around the place and pile them all into big heaps.  Thankfully, so far, he has not tried destuffing those.

"What?  I had nothing to do with that chewed shoelace.  Nothing.  Must have been a cat." 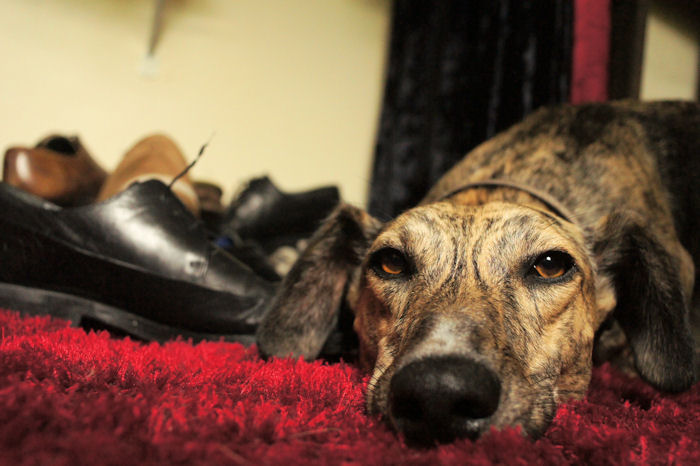 At the moment, he appears to be asleep, but I am keeping a stern eye on him.   I need to make more of an effort to use up his energy on things that don't leave bits everywhere, or require replacing!


I went to Weston Super Mare yesterday, to see Neuromancer,

kargicq, and meet the small kargimancers, which was nice, since with one thing or another we have failed to bump into each other since the pre-small-kargimancer days. Neuromancer and the Smallest Kargimancer took a ride on an amazing whirligig thing covered in rather elegant hand-painted-looking portraits and landscapes, all very much in a Victorian chocolate box style, but at the same time, covered in flashing lights. It was a very odd object.

Weston has really come up in the world since last I was there : it has a shiny new pier and almost all the Victorian buildings are looking sleek and well cared for.   In fact, the whole place seemed very prosperous and nouveau-Victorian.  Having grown up with tired, overgrown seaside resorts, where everything was run down and smelling faintly of pee, with the paint peeling and never any money to restore or build anything new, it's seems a different kind of world.  But apparently we are in deep recession now and woe and wailing is the order of the day?  If we have got to the bottom of our recession, I can't help feeling things could be worse (of course, maybe that just means there is a long way down left to go?  Depressing thought.)

Of course, it rained like a firehose on the way there, and the way back.  Stopping briefly at a service station on the way home, I was interested to see the entire cafe - probably some 25 people of all ages and sexes - watching the Olympic kayak racing with enormous attention.    I do not find I can focus much attention on the Olympics, but since all this effort and money has gone into it, it's probably a good thing that *someone* is enjoying it.