Firstly, we are not in fact characters in a convoluted Victorian drama.  The authorities did on Monday disavow all knowledge of Mark's dad's body, but only for a short while and then it turned up, as did his will.  This was a great relief.  The stress has been declining since it peaked at that point.

We really can't hold a traditional funeral in the current circumstances, and though I'm pretty sure a lot of people would be distressed by that, for us, that's also quite a relief.

It looks like we are still going to be able to move, and won't lose the new house.  And someone is coming to see this house on Monday, which is also good. There are going to be stressful things ahead, like how on earth to corral the cats and the whole packing and unpacking thing but surely they won't be insurmountable.

Went over to see my Mum today (in our plague bubble!), to sort out a minor issue with her new Chromebook. Seems to be a good solution so far : we've set it up with a nice extra large monitor since her eyesight isn't so great.  Obviously the dogs thought we were over there to get snacks, and were very pleased.

I have a mild sore throat but I've had one of those on and off this year, and particularly when I think about the plague, so I'm not 100% sure it's not mostly in my head. Have been feeling a bit weird and down, but not unreasonably so under the circumstances, I suppose.  Still feeling about 100% better than I was a couple years back in terms of focussing on the positive and not feeling full of grey fog and despair.  Compared to a lot of people I don't really have much reason for either fog or despair, but it appears these things are not rational and probably also somewhat genetic.  Hey ho.

So far I have not managed to write anything for Innumerable Stars, but there is still time.  I keep oscillating between the intriguing-to-me-but-requires-a-lot-of-research-and-potentially-is-iffy prompt, and the 'just take these two characters you like and have them chat' prompt.  I may yet end up with the second.

Seems ages since I posted photos of just randomly wandering about, so here are a couple of photos of my walk along the Tavistock Canal.  It's an astonishingly shallow canal nowadays, only about 2-3 inches deep, and I think this bridge and gate is more decorative than functional.  It's a pleasant walk, though, and you can park by the pet shop which is much appreciated by Theo. He likes both the dried sausages, and the chance to go around saying hello to the staff. 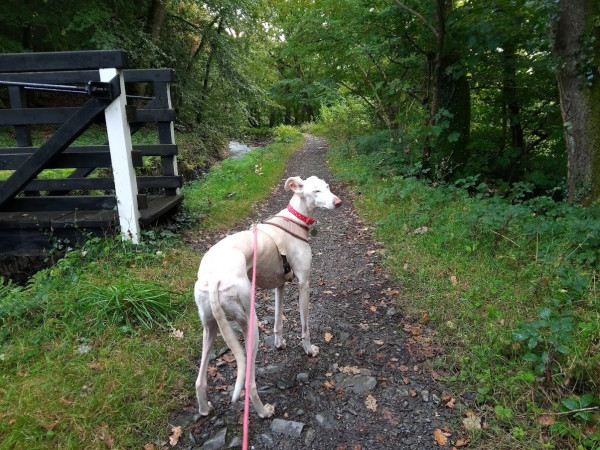