I don't seem to have posted for ages. A month ago, we had just put our house up for sale : this Friday, the painters finished painting it, and today we have (I hope!) sold it. It does look good with the sun shining and the paint all new! 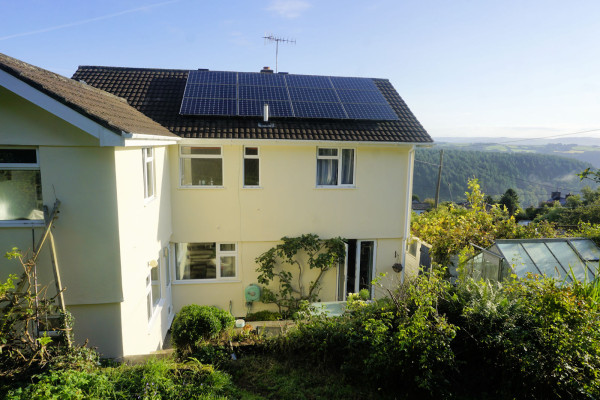 So, with luck we will soon be on our way to Pembrokeshire. This is all very alarming but I'm sure we will get used to it. I had not expected to move again, not least because when we bought this house it was in a very unpopular area where houses took forever to sell. But I guess that's the Plague Year for you.

I've just been wandering around the garden, eating the figs and apples and strawberries for nearly-the-last time. I shall not be too sorry to say goodbye to the garden though. It is a source of good things, but it is also rather a strain, the size of it and the way it just GROWs with the least provocation.

I tried to take cuttings of the fig and the grape vine in the garden that I planted years ago, but the cuttings got mould. Have just taken some more cuttings and treated them with very-dilute bleach. We'll see if that helps at all! I'd quite like to plant a new clone of the fig tree, because it's very productive, and although *probably* it's just plain old Ficus Brown Turkey, I don't know for sure because I originally bought it for 50p after the label fell off.

It's been a stressful few weeks, and the stress isn't over yet, but things are happening and that's much better than NOT happening and feeling on edge because the owners of the house we are buying understandably would like us to buy it so they can get on with their lives. Bit worried that the cats won't like the move, but hey.

Rosie is currently barking loudly at Theo, because I gave them each a turkey leg and Theo ate his and then stole hers. Otherwise, all is well in the land of the hounds. I've just bought Rosie a new house collar, because her old purple velvet one is looking very tired. I went for red polkadot this time, after much agonising.

What else has happened? Oh yes, I finished the two Tolkien Reverse Summer Bang fics I was writing:
Lands, Lords and Ladies, lost beyond the Sea.
which is a crossover of Tolkien's Fall of Arthur with The Silmarillion, plus my idea of a world where the land of Elves and Valinor lies not very far away, and sometimes Elves wander through and have adventures. On this occasion, Fingon is the adventurer. Oh, and it also has the concept of Corrigans, from Breton legend via Tolkien's version of Aotrou and Itroun.

The other story I wrote was:
Sea Longing which is about the legend of the Took Fairy Wife. I'm convinced that a long way back, one of the Took family married a small and unimportant Elf, and this is how.
Collapse