For an astonishingly long time I have been writing this post-BBC Merlin modern day Arthurian story, inspired by

sally_maria 's disappointment at the final episode of Merlin ending with Arthur dying before he ever really got to be satisfyingly a proper king and have adventures with Merlin. This spring I got

thesmallhobbit to kindly beta-read as far as I had got, and then I stalled again!

But I've written 50,000osh words and put far too much overthinking into this to just abandon it, (not to mention all the people who have had their ears half-talked-off about it over the years)  so I am determined to finish it.

I would love to be the kind of writer who can actually completely finish a long thing entirely self-fuelled with my own enthusiasm, without encouragement, but I'm not.  Or not yet, anyway. So, I'm going to post a chapter a week.  I've posted the first two already, I'm doing Monday Evening posts, and with luck that will put me under just enough pressure to get my act together and get the ending written.  I have lots of diffuse ideas about it, they just haven't gelled into A Good Ending yet.  So far the pressure has been enough toget me to sort out the Messy Bit in chapter 2 that had random notes scattered all over it, so that's a start.

The Once and Future King sleeps in the hills, waiting to return in Britain’s hour of greatest need. This much we know. Arthur’s name echoes down to us out of the Dark Ages. But why? When that terrible hour finally comes, what will happen?

My theory involves an ancient Volvo, a lot of bees, Arthur in pyjamas from Marks and Spencer, a random dog, some very old Anglo-Saxon magic, doom, death and the serpent-spawn of a dark god. 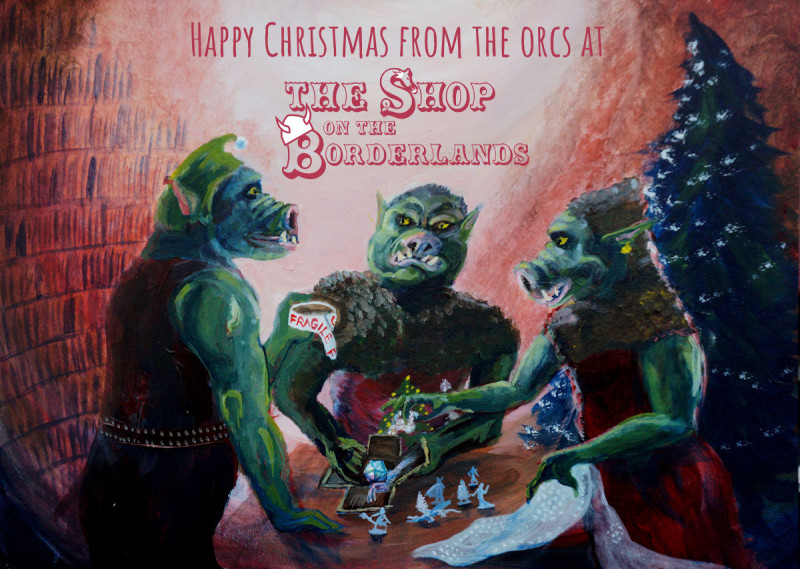 (Logo & text added digitally: I am not much good at hand-lettering!)

I'm still struggling with photographing stuff like this. The camera seems to be having difficulty with the difference between the pinky-orange background and the green of the orcs. I upped the contrast and reduced brightness, and that helped, but now the background books look more distinct and foregroundy than they should do, and the detail on the orc's arms look clumsy and less subtle than they should.... at least the miniatures and the big dice on the table looks about right.  And I do like the orcs expressions.
Collapse