A peacock!
I am rather pleased with this because I think it's the first thing I've ever made with coloured pencils that actually has a decent depth of colour and doesn't look too stiff.  Background is brusho again, and then the detail is all Inktense pencils, overpainted with a waterbrush to bring out the colours. 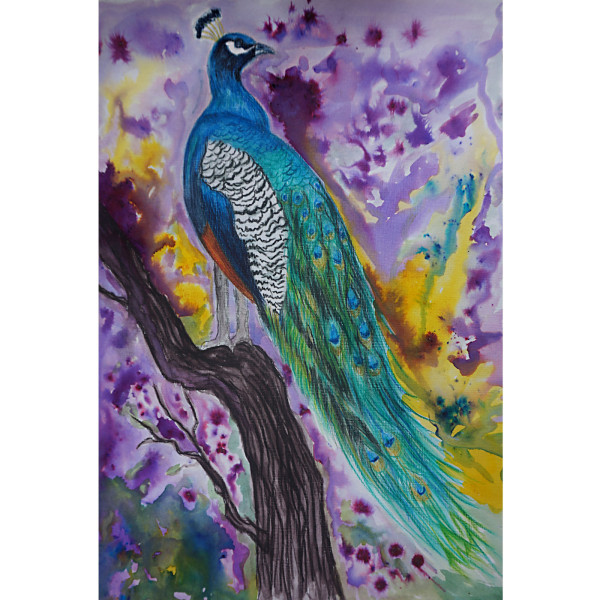 And here are three dwarves fighting an acrylic dragon!
( Collapse )

I made a card for my Mum for mother's day too, and took it over to her today, but I forgot to photograph it. Hey ho.

On Saturday I found some pheasant tailfeathers while walking along the River Walkham, and brought them home thinking the kitties would like them. This was apparently the best decision ever: Gothmog keeps bringing me tailfeathers to throw for her (they aren't the easiest things to throw, but if you throw them like a dart, with the hard bit first, they will travel several feet.)

More wind than we thought on the river today,  so we were only out an hour and then quickly headed back with the aid of the breeze behind us for an icecream (or in my case, a sorbet : one scoop of kiwi and one of gooseberry fool).  Now my shoulders are aching so I'm quite glad we called it a day early.

Worldbuilding Exchange reveals happened, so I can now admit that I wrote Letters Home from the War for Narya, who had THE most amazing list of prompts, I could have written almost any of them.

She did not, however, ask for Finrod, who none the less turned up anyway, which is at least very in character.  I don't suppose Beor the Old asked for Finrod either. Or Sauron.  Nobody expects the unexpected Finrod...
Collapse