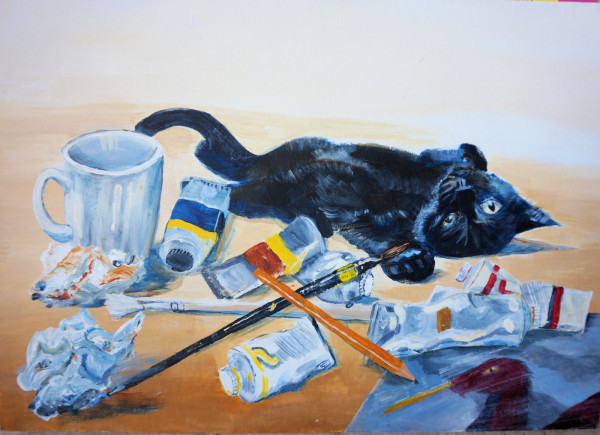 Gothmog kitten is a menace around paintbrushes, so here she is, being a nuisance among tubes of paint and stained bits of kitchen paper. :-D

She's sitting next to me on the sofa just now, fast asleep hugging a tube of permanent alyzarine crimson...

In other news, I wrote some things!
I wrote a second chapter for All Our Old Follies, Come 'Round Again, as a collaboration.  Dragonst0rm got Celebrimbor and Elrond into a very dark situation, I sent Celebrian and a dog to get them out of it.

And then this one: Kintsugi, was suggested by some anon on Tumblr. It's about Nerdanel.
I think Ariana wanted something really silly, but she got Sing all ye joyful, now sing all together! which is not, I suspect, as silly as she had hoped.  It's about young Arwen being grumpy.
I have started writing A Golden Voice, about Maglor meeting someone who will eventually be his wife, for Martial_quill. She doesn't have a name yet, though I know she is from Hithlum, from the Mithrim area, and likes horses.  I find naming textual ghosts hard.

As you can see, I do not put a lot of work into titles....
Collapse