Of the city of Tirion in Valinor. 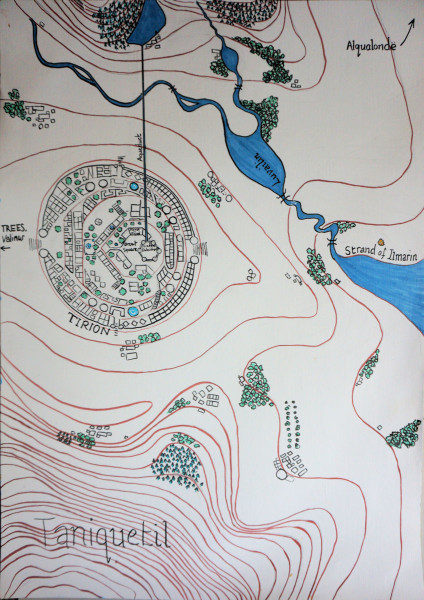 I am weak and suggestible, so I made a map. (Well, I already had a very scribble sketchmap, this is my attempt at tidying it up.)

The Pelori mountains lie to the north (I don’t think the mountain directly north of Tirion is named individually) and Taniquetil to the south, with the gap of the Calacirya between, and Tirion on a green hill in the middle of the pass. (If you think there aren’t enough buildings in Tirion, feel free to assume that many of the squares are tall apartment-houses, and also that the hill itself has been dug into, as well as built on. There are many surrounding farms and villages outside the walls.

Manwë of course lives on top of the mountain Taniquetil, in his mansion of Ilmarin. I think the Strand of Ilmarin east of Tirion is called that because if you stand on the shore and look up, you could see Ilmarin right at the top of the mountain, though there’s no way up directly from Tirion to Ilmarin, except for Eagles. You have to go around via Valimar if you are travelling on foot.

The city is built to take advantage of the light from the Trees with the main entrance to the West, though there is also a steeper winding route that goes up into the city from the Eastgate.

Tirion is supplied with water from a reservoir in the foothills of the Pelori, via an aqueduct that runs to the great tower of the Mindon Eldaliéva, where Ingwë lived when he first came to Valinor. The large building with two wings next to it on the Great Square is the House of Finwë, built with Light-gardens to the West, and a Star-garden to the East.

When Finwë remarried, Fëanor moved out and got married himself. I think his house is one of the houses about halfway up the hill, conveniently located for access to the warehouses and workshops of the Fëanorian Quarter, clustered in the best light beside the gate.

In the Years of the Trees, the light in Tirion came from the West and slightly from the South, so that the lake of Luvailin, or Shadowmere, was always in the shadow of the hill, and the lights on the star-side of Tirion reflected in the water.

The excellent water pressure supplied by the aqueduct, among other things, powers the fountains and the water-wheels of Tirion, and the water drains through a tunnel down into the Shadowmere.

I’ve probably made the streams look too wide. I intended them to be minor watercourses, not large rivers. There are of course many bridges to allow easy access to Alqualondë, a little North and East right on the coast.
Collapse