Last night we were finishing off our re-watch of all the Star Wars movies.  We have watched them in in-universe order, so we started with tiny awesome Anakin and finished off with absurdly emo and kind of useless Kylo Ren.  I feel I should have more to say about this, but I don't, except to comment that 'The Phantom Menace' is a really ludicrous title.

Anyway, while we were watching Luke and Rey wander around the Island of Porgs (I did like the porgs) and I decided to do a couple of quick practice faces. I feel I've got much better at faces in ink, but I haven't really practiced painting them, since it's a bit more work to get set up to paint than to just grab a pencil and some paper and whack out some faces.  I have a theory that if you just draw *enough* things then eventually all the bad lines have been drawn and all that is left should be the good ones.

Anyway, that didn't quite work out, because the first quick draft face I did (on a spare sheet of cardboard rather than artboard because I was trying not to overwork it) came out quite well, so it ended up more of a pair of portraits.  They were quite quickly done though, specially the one on the left, which I think has come out better than the one on the right...

Cirdan and a young Gil-galad. 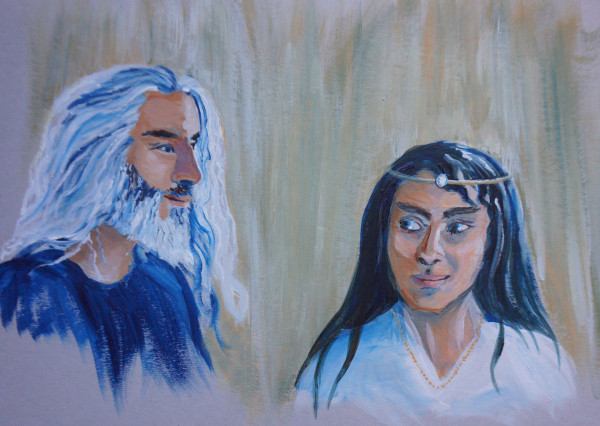