Fankil is doing really well.  Yesterday I went into the room and he was sitting on the windowsill.  He didn't run away, he came to play with Gothmog kitten, and he even took some treats that I chucked to him!   We are now letting him out to explore the house, though so far today he hasn't moved from his safe place behind the printer cupboard.  Perhaps he will come out later this evening.

Gothmog and Rosie are currently cuddled in front of the fire together. I put out two dog beds, in case they didn't want to share, but they do.   They are actually much more snuggled than this now, but this is a photo from the first time they did it, when Gothmog decided to chew Rosie a bit.  I assume not too hard, since Rosie is a galaxy-class wimp and would certainly not lie there to be chewed if it hurt. 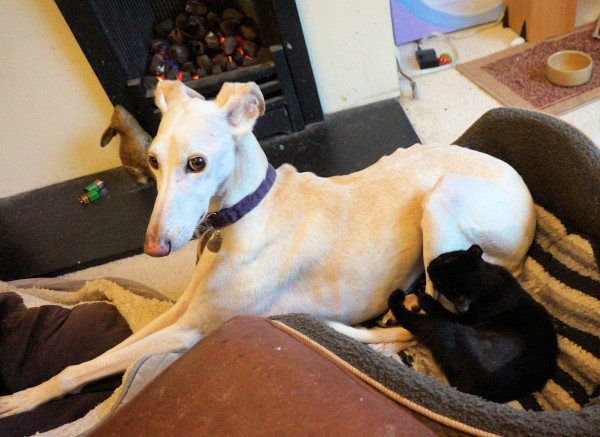 I think the presence of Gothmog is doing Rosie good.  So far today she has eaten three large meals and has just got up to wowl at me to demand a fourth.  And she's wagging a lot. This is very out of character, but also welcome!

I cut my hair this morning after just letting it grow for literally years (only a trim, but still).  Something I'd started doing recently is to plait my hair into a style roughly based on that of the Elling Woman bog body, and I'd been surprised to find that I could more or less just loop the hair into place without needing pins or elastic or anything.    Now, I find I can't do that any more!  There seems to be something about having chopped the ends off with scissors that stops them from forming a shape that holds together.  Hmph.  This is an argument for being less tidy in future.
Collapse