Gosh. Was it really over a week ago? 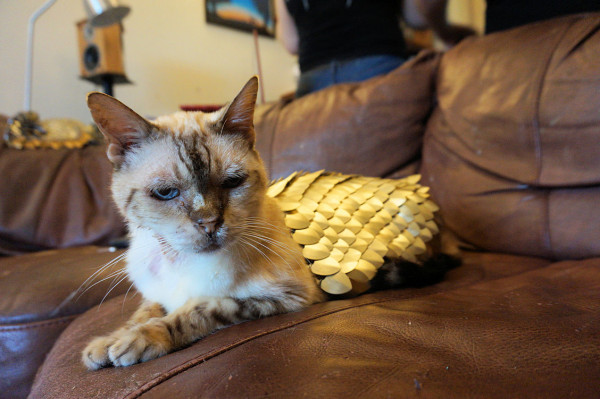 Little Yama Bungle, the last of our large assorted tribe of cats, died. He had had repeated problems for months with an abcess on his neck, which kept returning despite antibiotics (you can just see it in this photo, actually). He'd also developed thyroid problems, though we had a food additive that seemed to be helping with that. The vet recommended an operation to explore his neck, to see if there was something trapped under the skin, and the operation found a massive invisible infection. He died during the operation.

Not an old cat, really, he was 13 and five months, pp thinks. We adopted him in 2007 with his brother Suma, from the breed specialist Bengal Cat rescue (now defunct) and soon discovered that the minor rhinitis problem we knew he had was very, very messy. He had an amazing ability to shoot green snot out of his nose and send it flying across the room, where it would swiftly form a kind of hard glue. This made him unpopular with the dogs, who tended to avoid snuggling with him if they could get away with it, even if they were quite happy to snuggle with Suma.

Both of them were also royal pains in the arse when it came to food, and would launch themselves flying at you if you had the nerve to walk into the room carrying a plate of chicken : we had to resort to giving them 'time out' in the porch quite regularly to begin with.

Despite the rhinitis, he was a loving and surprisingly energetic little cat. Very clumsy, but he loved running madly up and down the stairs, particularly after we finally found a solution that helped a lot with the rhinitis (a powder for his food called bisolvon, what a great thing that was!) He couldn't take a hint at all, and would insist on sitting on visitors despite their protests. I think it was only a couple of months ago that he knocked Rosie's pot of lamb's hearts off the hob onto the floor and ate TWO whole lamb's hearts! Given the relative size of Yama and a lamb's heart, I'm still amazed that he didn't explode there and then...

So now we have no more cats. We're thinking that we may start again with a couple of rescue kittens, but probably not for a few months. The house seems weirdly empty (and clean!) with only Rosie Roo in it.
Collapse