Previously...
So, after the Council of Celeborn, we set off to Mordor to find out if anything was going on there.  Erestor, who had been at the council as Elrond's representative, came with us to see the Tower Kings. That's him in the brown robes next to the very spotty horse.

The Tower Kings are local kings who were given impressive Numenorean towers along the borders of Mordor, to live in after the War of the Elves with Sauron, by Ciryatur.  This was so they could keep an eye on Mordor in cause Sauron came back to visit his own Tower, Barad Dur.

Previously...
We marched into the fort of Bosvik, a well-defended spot occupying the only pass through the mountains to the Stiff-beard capital. There were two sets of gates, and all traffic travelling through the pass must travel through both of them.
Here we are, just arrived at Bosvik.  You can just see the southern gate in the background, and the Dwarves who have come with us lined up in rows behind the tables in the main courtyard. The Northern gate is defended by the square tower and portcullis. 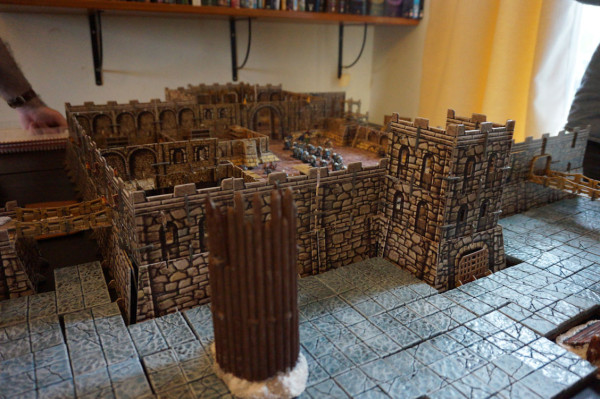 ( Collapse )
BUT THERE IS STILL MORE!
Collapse