It was the village show this weekend, and although I've not been for several years, I determined that this year would be different, partly because the show was for once being held in a field just up the road.  Of course, it rained.  It always rains for our village show, even after weeks and weeks of sun had turned the grass brown.

We went up, had a crepe from the Calstock Twinning Organisation (I am guessing they are twinned with somewhere in france, but we were more interested in the crepes than the twinning) and also a pasty, and an icecream, and poked around looking at the old cars.  We did not look at the old tractors.  We can summon little interest in old tractors.

Then it was raining, so we went home for a bit and missed the dog show, the horses and the tractor parade.  We came back at 4:30, because there was a thing in the booklet that said that people should not collect their exhibits until 5pm, but nobody had read the booklet and we were too late to see a lot of the vegetables, which was a bit of a pity, Oh well.

I had entered some Arty Stuff in the art classes: six paintings, and I won two firsts; in Still Life and 'Other': 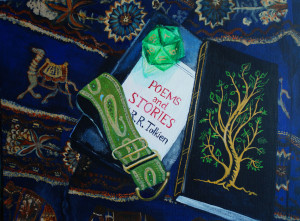 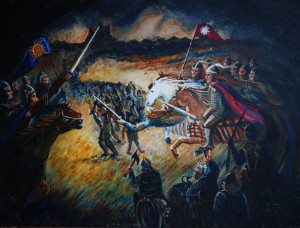 And one third prize, for this: 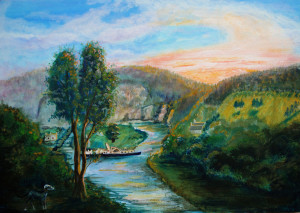 So I'm quite pleased with that as my first effort!
Collapse