The idea of this exercise was to make a painting with 50 strokes of the brush, to make it important to think about each brush stroke (not including background).  I added probably another 50 after the initial outline, but I'm still pleased by how fast I made this. It took maybe an hour. 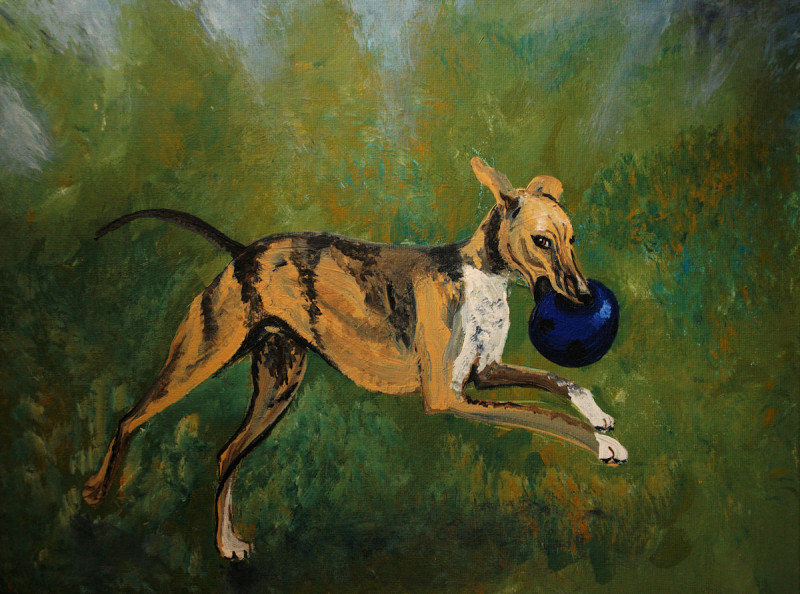 I went to a workshop this weekend on aggression & prey drive with Jim Greenwood.  I've wanted to attend one of his workshops for ages: he has a great reputation for expertise with lurchers in particular, so although Rosie has actually improved hugely and is now a pretty easy dog to have about, I grabbed the opportunity when I heard he was holding a session locally.  (He set off at 5:30am and drove down from Scotland!  Then he camped over in the field where we were training!)   It was a really interesting session, and Rosie was pronounced 'bulletproof' for being relatively unreactive.  All the other dogs present were male, and most were also smaller than her, which definitely helped. She generally likes small male dogs. Also, it was pretty warm (though nothing like as hot on a hilltop in the breeze from the sea than it is in the east of the country, I hear) and so she was quiet and happy and dozy.  She's always better natured when it's warm. But still!

A lot of the techniques were things I'd already read about or tried, but there were some new things, and it was really good to see how an expert does things and to be able to ask questions and hear about the experiences of the other attendees.

I seem to have failed on the posting things here front for a while -  when it comes to written things anyway, so here is a quick list.

Lands of the March : Maedhros, Amrod & Amras talking about who gets which lands and why.

Cool Water on a Hot Day : I'm quite proud of this one: Torhthelm, Feanor & Nerdanel meeting in Anglo-saxon Essex: a Homecoming of Beorhtnoth Beorhthelm's Son and Silmarillion fusion.  Because why not! :-D

Heroic Hearts ; Maedhros makes his first visit back to Hithlum after leaving for the March of Maedhros. Fingon offers a gift.

And then I added a chapter to: The Lands of Weeping and of War : which is my 1937 Silmarillion ending story, where Maglor hangs out with Elrond instead of wandering off along the shore alone.

And a chapter to A New Road or a Secret Gate, which is Elrohir adventuring around Beleriand Risen.  With Feanor, Amrod, Amras & tentacles.

Feel a bit guilty about those last two because normally I don't post stuff until I have an ending in mind, and those two I'm not at all sure where they are going.  Oh well!
Collapse